Around the end of March we began a large deck extension project. I live in Rockland County NY, and it's not called Rockland for no reason. Our property is jagged, wet, sloped, and it took 2 months to hammer out the foundation for the house. Lots and lots of rock. So, since I don't have a flat yard, I figured I'd deck it all. Our existing deck was 30x16. Last October we installed the pool, and once the snow was done we got rolling on the footings. All 40 of them. Luckily I only had to go 3 feet deep to meet code, but it was a painful task. No contractor would touch the job, being there was almost a guarantee of hitting solid bedrock.

So, I took it upon myself with the help of my Dad and my Deck Builder (who also refused to do the job alone) to start getting the footings dug out. I rented a skid steer with an 18" auger bit, picked up some 12" corrugated black pipe (sonotubes would have fallen apart due to wet ground), and got to drilling holes. The first day we knocked out 21 footings, it went VERY smooth. Day 2 we started the footings closer to the pool which were a nightmare. Almost every footing encountered a problem, mostly rock. 10 of them were bedrock. Luckily the architect added the plan for hitting bedrock to the drawings, which the town approved. Drill 4 holes into the bedrock and epoxy rebar, pour footing over top. After a couple of week we had the footings all finished and poured.

Posts and girders went up next, fairly quickly. I demo'd the existing deck and kept the framing, which will be married to the new deck. Joists have been placed, and that's pretty much where we're at now!

I'll post more pics as they come! Thanks for checking it out! 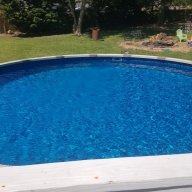 What a job!! You've made excellent progress, keep us posted!

You NEEDED that deck to have a yard really! Nice job so far! Smart deck builder to say NOPE not on my own! At least you got to play with the fun big toy!!!

What will you deck it with? What kind of railing will you be using? 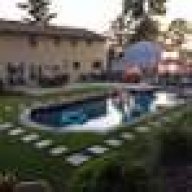 Looks great! I'm also in Rockland (tappan). And you're not kidding about the rocks, it's crazy and makes a job 5 times more work.

Justformda said:
What a job!! You've made excellent progress, keep us posted!
Click to expand...

kimkats said:
You NEEDED that deck to have a yard really! Nice job so far! Smart deck builder to say NOPE not on my own! At least you got to play with the fun big toy!!!

What will you deck it with? What kind of railing will you be using?
Click to expand...

Thanks!
I want to go composite on everything. Wood would probably look more fitting, given that my back yard is a forest, but I just cannot keep up with maintenance on a deck that big. So the lower the maintenance, the better. Right now I'm going with all Trex products. Spiced Rum floor boards, Vintage Lantern trim pieces, and a mix on the railings of white, Vintage Lantern and Black. I want to keep earthy colors but also throw some contrast in there to make it pop a bit.

Nectarologist said:
Looks great! I'm also in Rockland (tappan). And you're not kidding about the rocks, it's crazy and makes a job 5 times more work.
Click to expand...

Oh that is going to look awesome!! I can't wait to see it all!

About to start laying deck boards, figured I'd share this aerial shot of the framing which is just about completed.

That thing is HUGE!!! 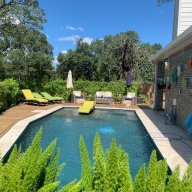 Any updates/progress? Can't wait to see how this project turns out!
T

Checkin in...so we started laying deck boards just after my last post. I ran some speaker wiring to mount a couple outdoor speakers in the back corners of the deck. All the angles and inlay/outer trim boards are holding things up a bit but we're moving pretty good for a deck this size. Field boards are finished as of today, moving onto the outer trim boards, then railings are next. Couldn't wait to get in the pool, so I snapped some drone pics after the first ever swim!

AveMaria472 said:
Any updates/progress? Can't wait to see how this project turns out!
Click to expand...

there ya go! Will try to stay more on top of updates, been a crazy couple of weeks!

WOW! I’m in awe at the size of that thing! Doing a deck build myself right now, I can’t imagine doing one that size. How was the first swim?!

Some MAJOR progress made!!! NICE JOB!!! Loving the drone shots!

A
Freestanding hot tub next to pool

Any Oklahomans on here? Need a suggestion for a reputable replaster, retile, and recoping contractor in the Tulsa area. (Pier pics inside!)