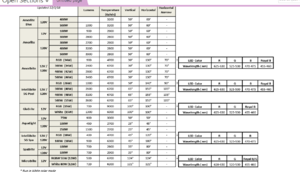 Pentair has a few models of LED lights. They vary in size and type of niche required. The chart to the right summarizes the light specifications.

Pentair guideline is to aim for 4 lumens per square foot of pool surface. For example, if the pool is 500 sq-ft then you need 500x4=2000 lumens. This would be 4 MicroBrites or 2 IntelliBrite rgb.

Inyo Pools also has a good blog on How Many Lights Do I Need For My Pool? with a table summarizing the coverage of the different Pentair lights. 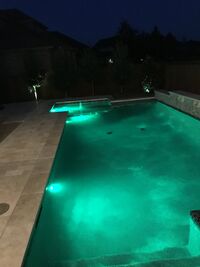 The MicroBrite is Pentair's latest 3rd generation LED light. MicroBrite lights are a compact 12V LED light that is only 3.5 inches long and installs in a standard 1.5 inch NPT threaded pool wall fitting. No light niche is required.

The MicroBrite lights connect to any Pentair automation control system or the IntelliBrite controller.

There are videos on YouTube of the MicroBrites at nite - https: //youtu.be/tJJs3A0jn2A

The IntelliBrite 5G was Pentair's first generation LED pool light. The IntelliBrite comes in both a white light model and a color changing model. You can choose from 5 predetermined fixed colors (blue, green, magenta, white and red) or 7 popular preprogrammed "color shows".

The beam pattern of the white light can be adjusted by rotating the lens 180 degrees for a wide or narrow beam pattern. The IntelliBrite 5G comes in 120V and 12V versions.

Intellibrite 5G lights can be controlled by a:

Multiple IntelliBrite lights can be connected via a junction box to a single control so that all lights can be switched on and off together. If you want to control lights individually for on/off and color changes they need to be on separate circuits and individual relays in an automation controller.

The IntelliBrite 5G light cannot be used on a dimmer circuit. Using the IntelliBrite on a dimmer switch will result in permanent damage to the light. This screw mounts and electrically grounds the housing securely to the mounting ring and wet niche. Failure to use the screw provided could create an electrical hazard which could result in death or serious injury to pool users, installers or others due to electrical shock.

Note that the pilot screw holding the face ring to the housing is bronze or stainless steel and must be used. 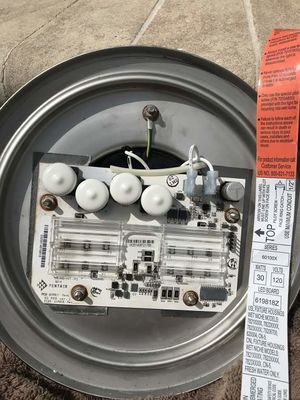 Pentair had problems with early gen IntelliBrites and had since fixed the problem. Apparently they had some defective chips on the board, and the board itself was backed by a thin aluminum heat sink that was found to be inadequate. They now have a thick copper heat sink and he claimed they haven't had to replace any of those yet.[2]

They always lose the red color first. It's the driver in the light that goes bad and a replacement driver is nearly $400. Might as well just but a new light

The U1 chip that seems to blow up is a Linear Technologies (now Analog devices) LT3496 LED driver, packaged in an impossibly-small-to-hand-solder UFD form factor. They make a 125 and a 150 degree C version but they have the same markings so we can't tell what's actually on the board.[3]

A member examined two of these boards on his bench:

The datasheet suggests that if the junction temperature gets over 125/150 degrees it will have problems. If these failures are indeed heat related, He is not yet sure which part is actually overheating. it could be the driver itself, or it could be that another part - in conjunction with the thin heat sink - gets hot enough to raise the temperature of the entire board above the driver's junction temp threshold and smokes it. 125/150 degrees C is pretty hot though.

Looking closer at the design of this light, the heat is intended to transfer from the copper backing of the PCB to the light housing to the water. Hence the instructions say not to operate out of the water for more than 10 seconds. There are two problems with the heat transfer capacity. One, the copper on the PCB is relatively thin and two, it only touches the light housing on the outer sides. The center where the LED driver is has no contact with the housing. This means the heat dissipation capacity is not high enough to keep the board from overheating.[6] 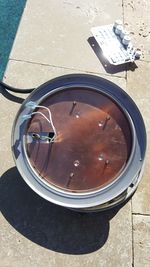 A heat sink is not a good solution for this application because there is no airflow which means the heat sink won't be able to remove heat efficiently once it is warmed to operating temperature. What is needed is more efficient heat transfer to the housing which transfers to the water. Basically there needs to be thicker copper touching more of the light housing.

A member picked up a sheet of copper remnant from a local metal store and cut it into a ~7" circle. The top was notched out for wiring and some divots were made for the plastic light diffuser that attaches to the PCB. He used some Arctic Silver thermal paste along the light housing to allow for better heat transfer between the copper plate and the housing. He then mounted the PCB onto the copper plate and used the thermal paste again between them.

Bolted it all back up with a new seal and so far so good. Time will tell how effective this is. The only other improvement he thought about was conformal coating the PCB. If anyone tries conformal coat make sure you mask off the LEDs. They have a rubberized lens that the conformal coat will dissolve.

The tech installed this board and it did not work because the transformer was actually the faulty part, and when he pulled off the wires to remove the board the J4 connector ripped off with it. It was a new board straight out of a sealed package.

A member repaired this Intellibrite board that had J4 torn off. For the price of this board he expected a terminal block that's screwed down securely, instead of surface mount quick connects!! Anyway, de does not have an Intellibrite his my pool to know if the "fixed" version will fit in the housing, but it functions.[7]

Looking at the board with J4/J1 in the top right, J4 connects to the left side of D23 and to the top right of D32 (I believe D32 is an optocoupler that tells the pic when the power is on). The hand-drawn red line in the photo below shows the connections to J4 that was repaired.

In the fix, the trace leading to D32 was still mostly intact but it tore off of the board between J4 and F1, so a jumper was soldered from the remaining trace to D23. The jumper is covered in glue to hold it down.

The parts on this board are difficult to solder to because they're all sitting on a giant heat sink that sucks up your soldering iron's heat. He finally got a good solder joint onto D23, but also ran the replacement wire/quick connect through the capacitors to glue it down and give it a better chance of staying put.

The GloBrite is Pentair's second generation LED light. They have many of the same features of the IntelliBrite lights with 5 fixed colors, 7 party modes, and controlled in the same way.

The GloBrite light and proprietary plastic niche form a low voltage lighting system that does not require bonding or grounding when powered by a listed 100W or 300W transformer.

The GloBrite uses a special installation tool (P/N 620057)[8] to install and remove it from its niche. Retain the tool from your installer. The optional GloBrite Glare Shield (P/N 620314] is for use on GloBrite Color and White LED lights to reduce light glare.

GloBrites come with a package of silicone lube in the box. It has a small white ring near the rear of the light. The ring helps hold it into the gunite sleeve. The lube helps slide the light into the tube. Put a little on that rubber seal when installing to help it slide in.[9]

The average life span of those seems to be about 2-4 years. They crack and water enters and they get destroyed.

The GloBrites use a proprietary niche so you're stuck to using them.[10] The GloBrite lights are non-serviceable. The complete light assembly must be replaced if anything fails in them.

If you are planning a pool build, Pentair has a new version called the MicroBrite that you should consider.

Florida Sunseeker makes a GloBrite replacement light with adapter to fit the proprietary niche.[11] Light is the Pool Tone Nicheless 1 1/2 inch Swimming Pool or Spa Light 15 - 100 Feet and the Adapter for Pentair globrite 1.5 or 1-1/2 inch lights. They include the adapter for free if you ask.

Use checkout code TFP7 on the Florida Sunseeker website for 7% off, free USA shipping, and no sales tax, on any items.[13]

The app that controls it can turn it on and off and set the different colors and "light shows". It only controls the lights and not anything else.

One member reports that what doesn't work too well, as of July 2021, is the setting of the various controls:[15]

The procedure to reset the control board inside of the lights is:[16]

This establishes a reset on the lights and resolved the issue with a members Globrite not changing colors properly. This should work for other Pentair LED color changing lights.

If your light is connected to an automation controller you may need to remove the cover where the cords for the lights come up through the conduit and connect to the feed from the transformers. Then unscrew the wire nut to the group of lights from the source transformer (black wire usually) and manually touch the power wire wires 31 times to the other wires still twisted together about 1/2 a second apart each time. We don't think there is a way to do this via automation.

You can get the Pentair AmerBrite 51W LED (500W equivalent)[17] P/N 602077 to replace the incandescent bulb. This product is discontinued but may be available from vendors.

The AmerBrite LED bulbs are available in 300, 400, or 500 watt equivalencies in 120V or 12V version with an Edison screw base. The AmerBrite LED lamp is a ‘plug-and-play’ replacement for Amerlite incandescent bulbs. The lens can be rotated 180 degrees to provide wide or narrow beam pattern.

Other LED Lights for Pentair Fixtures

Florida Sunseeker has LED bulbs for screw in Edison style fixtures. They also have aftermarket light engines for the IntelliBrite 5G lights.

Florida Sunseeker aftermarket IntelliBrite 5G lights do not sync with Pentair programing. Meaning that color selection will not be the same. They control the same way with a toggle where you turn the power on/off.[20]

Use checkout code TFP7 on the Florida Sunseeker website for 7% off, free USA shipping, and no sales tax, on any items.[22] 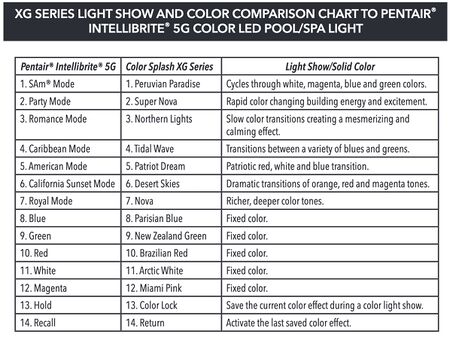 Halco/J&J Electronics offers a 3 year warranty and their lights are compatible with Pentair's IntelliBrite lighting configurations. They have different names for their colors and light shows as shown on the chart above or to the right.

CMP Brilliant Wonder lights are a Pentair compatible alternative to the MicroBrite lights.