Do Not use Dry Acid

Pentair specifically says on page 9 in the IntelliChlor SWG Manual[1] - CAUTION: The use of dry acid (sodium bisulfate) to adjust pool pH is discouraged especially in arid regions where pool water is subject to excessive evaporation and is not commonly diluted with fresh water. Dry acid can cause a buildup of by-products that can damage your chlorinator cell.

How to Determine the IntelliChlor Cell Usage

Pressing and holding the “More” button launches the System Status Mode. When the lights finish scrolling, the percent lights indicate hours of usage in 1,000s. For example, if the 40% light lights, that indicates 4,000 hours.

What Does the Flow/Temperature Switch do on the IntelliChlor?

Flow switch has 4 wires on cells manufactured before September 2018:

Flow switch has 3 wires on cells manufactured after September 2018:

The IntelliChlor uses the Harwil Q-12DST-C2 flow switch.[2] It has an integrated 10k thermistor.[3]

A suspected bad flow switch can be confirmed by cutting the black and red wires and connecting them together coming out of the cell. If the cell operates with the wires connected this confirms the flow switch was bad. Do this only for temporary diagnostic purposes.

What Causes the High Salt Light on the IntelliChlor?

What Does the IntelliChlor Low or High Salt Lights Mean?

Always check salt level independent of the cell before adding salt. A failure of the temperature sensor will give incorrect salt warnings.

The red/green flashing light means the unit is trying to run the salt test, but until you have flow it will not pass.

What Does the IntelliChlor Do in Cold Temperature?

The cell will stop generating chlorine when water temperate is below 60 degrees.

If the cell light says cold when the water is warm, the temperature sensor is likely bad.

How Do You Display IntelliChlor Cell Water Temperature?

Version 3.1 on adds the ability to determine system temperature. Pressing the “More” button after the display shows 1,000s of hours of usage, will show temperature as follows:[4]

Where is the Manufacturing Date on the Intellichlor?

The manufacturing date should be on the label on the bottom of the cell.

How to Replace the IntelliChlor Flow/Temperature Switch Assembly 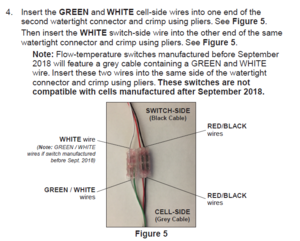 Follow the enclosed directions to remove the existing flow/temperature switch.

Install the thermistor in the plumbing near the cell using a water temperature probe, like the one that comes with an EasyTouch. Drill a hole in the pipe, stick in the probe, and use a hose clamp to hold it in place.[5]

Now the cell sees the water temp from the new probe and not the thermistor in the flow switch.

How Does the IntelliChlor Calculate Salinity?

The salinity is calculated based on the conductivity of the water and the water temperature.

The conductivity sensor is a separate device in the cell which can be seen if you look in the cell.[6]

What is the Recommended IntelliChlor Salt Level?

What is the IntelliChlor Cycle Time?

For some reason, unknown to Pentair, minor changes to the system will cause the salt level in the EasyTouch and ScreenLogic to read zero.[9] This is just an error in reporting and the cell should still be working as long as the actual salt level is ok and the cell does not show a "red low salt" light on the cell. I believe that there is a timing issue in the circuitry that reports the salt reading to the EasyTouch. It is obvious that the cell knows what the real salt level is. This has been "Fixed" by the following actions:

What Does the Intellichlor Power Center Do?

The ICXX cells are powered by either a stand-alone Power Center box or a transformer that is integrated with an Easy Touch or IntelliCenter Load Center.

How is the IntelliChlor Power Center Wired?

When using 240 volts (often called 220) you connect L1 to the Yellow wire and L2 to the White wire and connect the Blue/Violet to the Black wire with a wire nut.

When using the 120 volts, you connect the hot wire to the Yellow and Black wires and the Neutral to the Blue/Violet and White wires.

The power supply for ichlor and intellichlor contains a 4 wire communication cable that has a 22-39 volt DC output at 6 AMPS maximum (red and black as shown in the manual).[10]

Some Power Centers have a glass 10 amp slow blow fuse. The specifications are:

They have been found on Amazon and the old fashioned hardware store in town.[12]

There is a green LED on he power center PCB board indicating power is on. If the green LED is off first check the fuse.

If the fuse tests good then jumper the fuse and see if you get the green light. If you do then replace the fuse holder.

The IntelliChlor power center PCB is either in the automation load center or in the separate Power Center box.

To the right is an IntelliChlor power supply board in an Easy Touch system. You can see the green power LED glowing in the upper right. Yours will be different, but similar. You can see the two red wires coming into the board that bring in the AC volts and the DC volts go out at the connector on the left hand side.

IntelliChlor Cell Should Not be Powered When Pump is Off

The flow switch is a secondary safety mechanism. There should be a primary means for the cell not to be powered when the pump is off and there is no water flow. This can be with pool automation equipment or a mechanical timer.

WARNING:CHLORINE GAS BUILDUP CAN OCCUR WITH IMPROPER WIRING: To reduce the risk of personal injury the IntelliChlor® Salt Chlorine Generator (SCG) Power Center must be installed on and wirded to the load side of the time clock, electronically controlled switch, or relay load side, so that it will receive power only when the pool pump is on. Otherwise, dangerous chlorine gas buildup can occur. The IECG should never be energized when the pool pump is OFF and water is not flowing through the unit. [15]

Here is one report - Explosion near the SWG