The links below are for helpful Hayward OmniLogic resources:

Hayward OmniLogic How To Guide 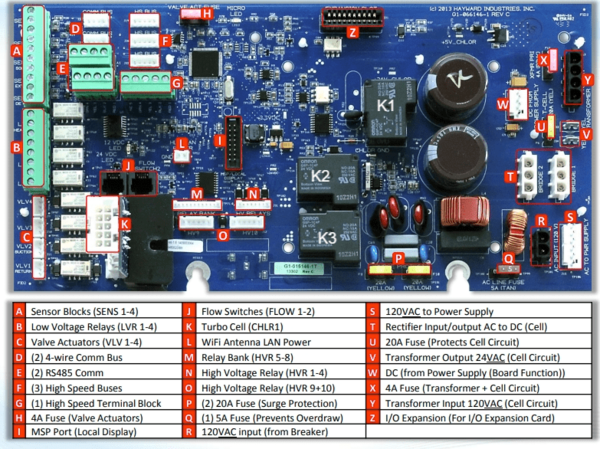 Also note at the bottom of the Firmwware section it says:

When you get the new firmware (at hayward.com/firmware), the first two items in the list are firmware upgrades for the MSP and the MPP. The MSP is for the main display on the Omni, and the MPP is for the main board in the Omni. You need to apply both firmware updates for everything to work right. Applying just one or the other may cause issues.[4]

The instructions for installing are in the release notes. You need to copy the two firmware files to a USB drive (at the root level), remove the front panel on the Omni to expose the USB (they should have really mounted this port on the panel in an accessible location!), plug in the USB, then follow the instructions to install each file.

Use a small USB memory drive. A 512MB drive worked for one member while a 32GB drive failed.[5]

Omni now has the ability to configure heaters that support both heat and cool. For this version, the heater can be placed in Heat mode or Cool mode. For future versions, it will be allowed to do both automatically. Solar heater can now run in cool mode when the cool mode is selected.

Firmware Revisions Included in this Release:

Hayward released R4.0.0 firmware for the OmniLogic automation system in November 2020.[7] The big news here is that future updates can now be done directly from the internet - no more plugging in a USB to perform an upgrade!!!

Per the known issues list you have to restart the OmniLogic twice for everything to return to normal.

Here is a list of features and enhancements added:

R3.2 added a number of new features, several that recommend moving to the latest version as soon as possible:[8]

There is more, but I have found R3.2 to be far more stable than previous releases. I have found that when you upgrade to R3.2, it's a good idea to delete existing schedules and re-create them. I had schedules that didn't kick in for 24 hours, and one that never turned on when it was supposed to. After playing for several days, I called Hayward and they recommended re-creating the schedules. No issues after I did this.

You may find that one of the steps in the OmniLogic Troubleshooting Guide is to clear the DDT - Device Discovery Table - to refresh communications.[9] Unfortunately the shell command was removed in R3.0 and Hayward has not updated their manuals.

If you are not on R3.2 - update the firmware to R3.2 before you try anything else.

To erase a configuration or DDT use the “Factory Reset” option under Service Mode. Note that Factory Reset will also reset the current network settings.

As always, before doing anything as drastic as a Factory Reset, make sure you backup your current config to a USB or your PC. Once you perform the Factory Reset, you'll need to either add and reconfigure all of your system components to the Omni, or you can first try reloading your config and see if that works.

If you want to be able to turn on the filter pump automatically to maintain a desired temperature by flipping the heater on, you'll need enable "Heater Extend" in the OmniLogic's configuration.[10]

The OmniLogic can be configured to run the VSP at a minimum speed when call for heat is present. 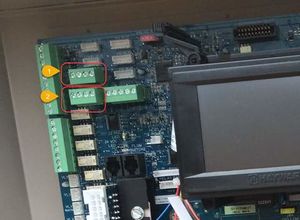 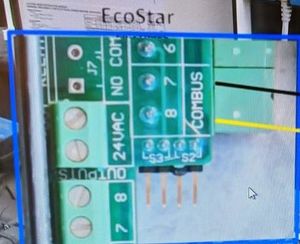 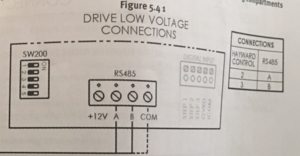 HUA is Hayward Unique Address that the VS pumps possess. The Omnilogic should auto detect the HUA’s in config mode and let you select which HUA does what. You normally have to select the pump address box to get a full list of all the detected HUAs.

Up to 16 pumps can be connected to the low speed bus.

You can check the com bus status from the pump diagnostic menu (Com Bus Online Address:xx). You can also see everything on the bus in the Omnilogic Config menu -> System Info

1 & 2 green blocks are actually the same and you can connect to either one.

If you have an issue getting OmniLogic to recognize a pump HUA note that the low speed bus numbers are read R to L instead of L to R. You should wire the communication in the following order on the LS Bus, 4,3,2,1.

Communication wires should be run from 2 & 3 on the RS485 connection green block on the OmniLogic to A & B on the pump. Terminal 2 - A and Terminal 3 - B.

Firmware Revision 3.2 and the Pump Converter accessory board (HLPMPCONV) gives the ability to control Pentair Intelliflo VS pumps.[12] Based on the picture of the HLPMPCONV board it looks like it connects to the Omni RS-485 bus and the IntelliFlo RS-485 data port. 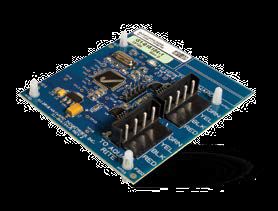 If you find that the HUA of the pump being recognized in the Omnilogic unit matched the HUA of the Ecostar pump itself but the pump does not turn on then the OmniLogic may have lost the connection.[13]

You can try powering everything off including the main circuit board for the OmniLogic and powered it all back on.

Or go back into the config wizard and you may find the pool had no pump assigned to it. If so select the pump from the drop down menu while in config wizard, save, reboot.

Sometimes it does that with power surges or power cycles or if you are going in and making changes "too much" in the config wizard.

Omni/VS Pump HUA Not Visible to the Omni Control

Hayward has seen some instances where the HUA from a Gen 3 VS pump was not visible to the Omni control.[14]

These instances have occurred after:

Once Power was restored, or the pump powered down and back up the HUA would not populate into the control.

Solution that Hayward found is that power needs to be turned off to the pump for a MINIMUM of 5 minutes and as much as 15 minutes to allow the drive to reset. Once power is restored the HUA was visible to the Omni and the pump worked normally.

These documents may be helpful in solving ColorLogic problems:

The OmniDirect mode only supports the new lights that are low voltage. 120V lights need to go through a relay, while the low voltage lights are connected directly to a specific input on the OmniLogic. OmniLogic is capable of sending a digital message over the low voltage line to change light color, but the light has to have the appropriate firmware and hardware to receive the message and act on it to change colors.[16]

ColorLogic 4.0 120V, does not support OmniDirect, only the low voltage lights built after June 2018,

It’s mentioned in the newer manual....

A member reported[17] the upgrade process as:

“I found a local hayward dealer and ended up buying:

Both had a blue label on the outside (3x5 label with serial# and part #). So this confirms what was stated on this forum about knowing which is good and not. Turns out my existing lights were same model just from 2014-2015 timeframe (no omniDirect) both were not working.

The installer manual that came with the lights talked about OmniDirect Mode so I know these were the right ones.

Start to finish in about an hour. Not bad for a DIY'er. The OmniLogic app how shows all of the new colors, shows, brightness and speed for shows and works way better than the old model.”

The OmniLogic touchscrren LCD loses calibration and the touch points do not align with the text displayed.

You can try calibrating the screen if you can figure out the touch points.[18] The process is:

The screen part number is HLX-LCD to replace just the screen. HLX-LCD-DSP is the display with the board. Hayward instructions for replacing the HLX-LCD say:

WARNING: THE LCD SCREEN CABLE CONNECTOR IS VERY FRAGILE.When viewing the underside of the MSP Local Terminal, you’ll see the MSP circuit board which is held in place by 4 Phillips head screws. Before removing the screws, the LCD screen ribbon cable must be disconnected from the circuit board. The connector that holds the ribbon cable is very fragile and care must be taken when attempting to unlock the latch.

Hayward made a change to the to the OmniLogic’s (HL-Base) LCD.[19] They switched to a new manufacture for the LCD in the MSP. The part number for the new LCD is HLX-LCD0520.