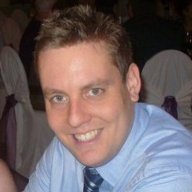 I took the check valve off again but couldn't see a part number or any other markings anywhere. I definitely see how it's restricting flow though, only a small area for water to get through around the center.

I would just remove the CV and replace it with straight pipe.
Reactions: JamesW and mknauss
J

I would get rid of the check valve or at least replace it with a Jandy check valve.

That check valve has too much head loss.

The formula for your system curve is about:

Wolfram|Alpha brings expert-level knowledge and capabilities to the broadest possible range of people—spanning all professions and education levels.

That is still about 3 times higher than it should be. 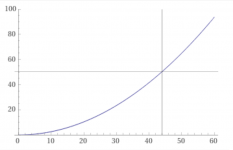 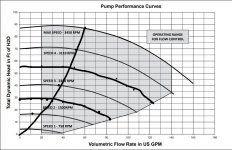 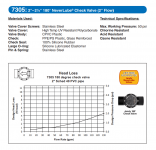 Do you see any part numbers? 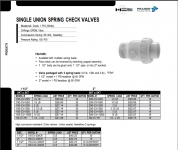 You might be able to take the check valve apart and remove the spring and flapper.

It's definitely a Praher check valve. 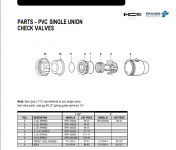 JamesW - can the guts be pulled out of the CV?
J

I think that the valve can be disassembled and the guts removed.

Remove the pins as shown in the video. 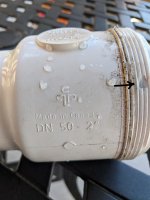 As you can see from the catalog, the check valve spring can be anywhere from 1/4 psi to 10 psi depending on the model number.

Remove the guts and see if that helps.

Check the heater internal bypass and the thermal regulator.

If you look into the heater inlet, you can see the spring part of the internal bypass.

If you push down on the spring part, you can see the valve part going into the part where the thermal regulator goes.

Part 8 is the internal bypass.

If you look in the inlet (top arrow), you can see the spring and plunger assembly.

If you remove the plug (#19) and the thermal regulator (#15 (see video)), and look in the hole (bottom arrow), you can see the flat disc that goes to the internal bypass.

Part #14 can be removed to get a better look at the internal bypass.

I suspect that there might be debris in the bypass check valve.

These heaters are horrible as far as flow efficiency.

They really need to fix this.

It's ridiculous that all of the flow has to go through the tiny opening. 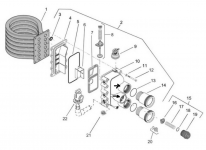 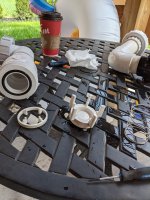 Here are the updated numbers with the guts removed. Didn't really make much of a difference...


Not sure if this sheds any light on the situation but here's the numbers when the filter is in "recirculate" (and CV guts removed):

This looks quite a bit more involved. I'll have to wait a couple days to try this. Anything in particular that I'm looking for? I mentioned some rattling coming from the heater near the inlet/outlet. Does that seem like it could be a problem? It isn't loud but it is constant.

Undo the two unions at the arrows and look inside the heater inlet to see if the internal bypass looks OK. 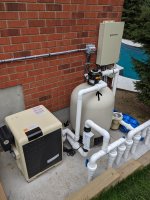 If you look into the heater inlet, you should see the internal bypass.

If You push on #1, you should be able to see the disc #2 moving in the thermal regulator hole. 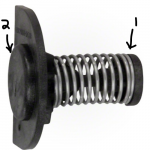 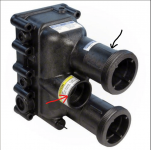 Great, thanks for the direction. I'll check this tomorrow.
Reactions: JamesW
J

The filter is creating some head loss.

For the below set of numbers, did you get the reading at full flow at 3,450 rpm? 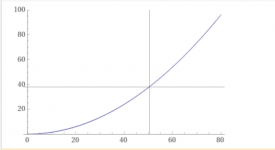 Wolfram|Alpha brings expert-level knowledge and capabilities to the broadest possible range of people—spanning all professions and education levels.

Maybe get a vacuum gauge for the suction and a flow meter.

You can put the flow meter on the vertical pipe between the filter and the heater.

You can put the vacuum gauge on the pump strainer drain plug hole.

Just be sure not to overtighten the gauge or you could crack the threaded hole. 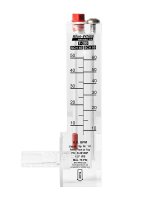 Take control of your fluid management process. Start by getting in touch so we can help determine the right solution for your needs. Reach out to Blue-White Industries today! 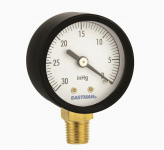 BTW, there were no pins in the threads (those were just empty holes). I was able to pop off the end with a flat-head screwdriver (red arrow below) to remove the guts: 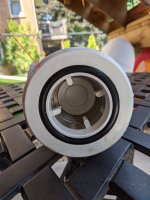 All my ball valves are Praher (they have clear part numbers) so it stands to reason the CV is also Praher as you surmised. I just don't know what model...
J

Ok, the spring does not look super strong.

Removing the parts did not seem to do much anyway.

Maybe an issue with the heater, filter or suction.

You mean with the filter in recirculate? I would love if I could get the pump to run at this rate when in filter-mode! So quiet!

Would that mean something is blocking/restricting the suction pipe(s)?

JamesW said:
The filter is creating some head loss.
Click to expand...

Could it be an issue with the multi-port valve?

JamesW said:
For the below set of numbers, did you get the reading at full flow at 3,450 rpm?
Click to expand...

I didn't as I wasn't sure the high GPM would cause any problems. I can get those values if it's there's no issue.

JamesW said:
Maybe get a vacuum gauge for the suction and a flow meter.
Click to expand...

I would install these before the pump? 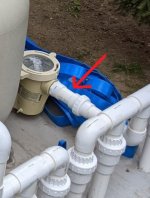 The gauge (G) can go at the pump front drain plug hole if it will screw in. It's close to the ground and the gauge might hit the ground as you try to screw it in. You can undo the pump unions to lift the pump to install the vacuum gauge. Don't overtighten the gauge.

If you install a gauge, protect it from getting stepped on as that could crack the pump at the hole if someone steps on the gauge.

The flowmeter (F) can go on the vertical pipe at the F. 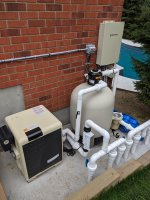 If the vacuum gauge is 10 inches of mercury or less, that's good.

If it's over 10 inches of mercury, that's bad and might indicate a blocked suction.

20 inches of mercury, or higher, puts the pump in danger of cavitating.


At 3,110 rpm, the total system pressure minus the filter pressure indicates a possible 11 psi on the suction, which is 22 inches of mercury or 25 feet of head.

The pump numbers are not super reliable because they are not from actual measurements. They are from calculations from the power used. 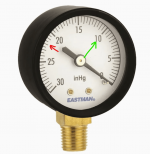 Yayyy, from JamesW's experience, we finally learned how the pump knows it's flow . Sounds like the pump's brainbox converts power draw to an expected PSI, and therefore flow, knowing its RPM.

And we've also learned from your very helpful testing that the pump is wrong in its own expression of PSI by about 30%, assuming your pressure gauge is likely to be close to correct, which I think is a reasonable assumption. You would only expect that to be lower by a small fraction of one PSI (pressure loss in pipe from pump to multiport), if the pump's brain was correct. (I'm also assuming your pressure gauge reads zero when the system is off, and that it's reasonably new).

So if it were mine, I'd turn that gobbledygook off, and run it based on RPM. There's a strong possibility that there's no practical problem here at all (other than that intelliflo VF pumps aren't fantastic at calculating their flow rate).

Alternately, you could set flow rates low. A possible problem with that is the minimum 20 GPM in the settings, which might truly be delivering more like 25-27 GPM, more than you need for the SWCG. Conversely 20 GPM (the pump believes itself to be) is a nice low end safety limit for your heater, which is spec'd at a minimum flow of 25 GPM.

I have huge respect for the posters and information you're getting, and if you're enjoying the exploration and don't mind some cost, that's great too, because the rest of us following along are learning heaps here.

Your suction will be around 5 inHg higher than average circumstances because of the 6 foot lift (IIRC) from pool to pump.
J

needsajet said:
pump is wrong in its own expression of PSI by about 30%, assuming your pressure gauge is likely to be close to correct, which I think is a reasonable assumption.
Click to expand...

The filter gauge only records the return side.

So, you have to add the suction side to make up the difference.

We would need a vacuum gauge reading to be sure.

So, the filter pressure is really 22 psi, which leaves 7 psi for the suction.

So, not as bad as I thought on the suction.

Even if you have 70 gpm going through 100 feet of 2" PVC pipe, the dynamic head loss should not be more than 8 feet.

So, possibly at least twice as much dynamic head loss as expected.

With the known lift, the suction pipe should have been upsized to compensate.

The total static and dynamic is still 22 inches of mercury or 25 feet of head. 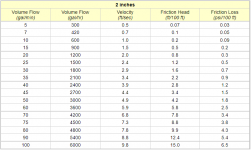