What is supplying the 14-16 volts? Have you replaced that power supply?

@Jimrahbe @JamesW may have ideas.

The +15 VDC power comes from the com port J20, pins #1 and #4 inside the EasyTouch.. If the com port was bad, the EasyTouch could not control the IntelliFlo nor the SWCG from the panel itself.. I assume everything works except ScreenLogic.

I suspect the red light is nothing but an indication that the power supply inside the Protocol Adapter is working.. If you connect the PA up to the com cable and the voltage drops to 3 volts, that sounds like a bad PA to me.. Do both of your PA's drop the voltage to 3 volts when connected?

Could also be a poor connection on pins #1 or #4 of the cable where is connects to the J20.. If everything works at the panel, when the PA is connected and the voltage at the PA is only about 3 volts, then the cable has to have a connection issue. The PA can't load the com port voltage down without shutting the EasyTouch com port down.

I have attached three pictures for reference below. In picture 1 you can see me testing the voltage in the four prong insert while not plugged into the protocol adapter. The black wire in this test read 16.7 volts (should be sufficient to power the adapter) which is the same reading it was the other day when it wasn't powering the protocol adapter. For reference, when I test the yellow and green wires with the four prong insert unplugged they read about 14 volts.

This has all gotten a lot more confusing to me.... curious what ideas any of you may have. I appreciate the help! 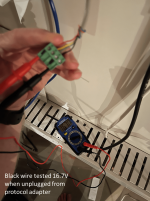 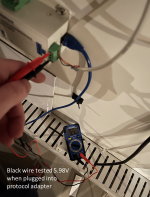 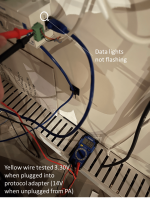 I would take your PA outside by the panel, disconnect everything from J20, run a short cable from J20 to the PA, and run a long Cat5 cable to your router, and see what the PA does.
M

Thanks for the advice. Not really an option for me though because the the wire is about 100' long and buried under ground under our patio.

You can just use a short piece of 4 conductor wire to connect the PA to the com ports and then create your own network cable from bulk wire. Just crimp on rj45 connectors on both ends. This is just a temporary setup to see if things are working.
M

More information to report..... Last night was the first time the red light had turned on the protocol adapter in a few weeks. I just went downstairs to check again and the red power light won't work again - Also, the voltage readings were about 2 volts less just now than i read last night. I noticed that the time last night when I was downstairs was when the spa was running at a much lower RPM than the pump runs when the pool is circulating. So I just went outside and turned the filter pump off to see if that somehow increased the voltage back up and got the power light on the protocol adapter to come back on.... no luck. I also tested the black wire on all three com ports in the easytouch just now and they all read the exact same voltages i was just reading in the basement.

Further background, when my pool company was opening the pool a few weeks ago for the year, they also noticed that the fireman switch on the Rheem heater was wired incorrectly and had fried the circuit board. They replaced the circuit board in the heater the same day they got the pool opened and I havent been able to get the protocol adapter or screenlogic to work since.

mowens333 said:
Thanks for the advice. Not really an option for me though because the the wire is about 100' long and buried under ground under our patio.

Cat5 cable can be up to 300 feet long. I would think you can find a route from your equipment pad to your router within that length for the test.
You must log in or register to reply here.
Thread Status
Hello , This is an inactive thread. Any new postings here are unlikely to be seen or responded to by other members. You will get much more visibility by Starting A New Thread

Everything Else Jun 3, 2022
Jmotley0104
J
D
Pentair EasyTouch 8 no data on ScreenLogic App

Everything Else May 23, 2022
ogdento
O
D
Protocol Adapter Update via Mac