Wahoo a la Scampi with Risotto

So a work colleague of my wife's is an older gentlemen near retirement age and he enjoys working part time and then spends 2 weeks per month down in Rocky Point, Mexico. He co-owns a fishing boat down there where he and his partner will hire a few local guys and go out on 10-day deep sea fishing trips. The boat has all the vacuum packing and flash-freezing equipment on board so all they do for 10 days is float around the Gulf of California, catch and prep fish and then bring their haul in. I suppose they sell most of it wholesale to local restaurants since Rocky Point and the surrounding area is a major tourist attraction for Americans looking to visit a nice resort town; it's less than a four hour drive from Tucson.

Anyway, John gave us two thick filets of Wahoo, which is apparently a prized sporting fish and very dangerous to catch (I believe when it's hauled onto the boat you have to beat it to death with clubs and gaffing poles or else it will attack...). In Hawaii, the fish is referred to as Ono but, given it's violent nature when captured, I suspect most people would call it the "OhSheet" fish as everyone screams "Oh S _ _ T!!" when it hits the deck.

Here it is thawing in my sink -

So I decided the night's dinner will be grilled Wahoo with scampi sauce and risotto. The risotto comes first -

I've got 2 cups of Italian risotto with about a half cup of finely chopped onion and about 6 cups of liquid (chicken broth). I use a heavy cast iron pan when making risotto because the cast iron holds heat the best which is critical for slowly cooking the risotto. And here's the thing about risotto -there is no such thing as "fast" risotto! You can only make risotto slowly and so expect to stand in front of the stove for a good 45mins at least.

Start off by sautéing the onions in olive oil and, when softened, add the rice to brown it a bit -

You keep doing this slow cook until all of the liquid is used. The trick to risotto is to never let it "burn" to the bottom of the pan and so that is why you are constantly stirring it and scraping the bottom of the pan. If the rice starts to stick to the pan, add more liquid. What I also do is put my oven on warm (which is like ~160F) and, when I add the last cup of liquid I cook it off about half way then add 2-3 tablespoons of butter and, in this case, a couple of stands of saffron. The end result looks like this -

I then put a heavy lid on the pan and put the entire pan in my warm oven. The low heat will let the risotto absorb the rest of the liquid while the butter will create a creamy sauce around the rice. Add whatever amount of salt and pepper you like to taste.

While the risotto was being cooked, I had thawed the wahoo and coated it with a little lemon juice, olive oil, sea salt and pepper and had it sitting in the fridge. My next step was to grille up the fish to an internal temperature of about 130F and then bring it in the house and put it into the warm oven while I made the scampi sauce. Here's the completed grilled wahoo -

Scampi is stupid-simple to make - half of fresh lemon juiced, 2/3 cup of white wine, olive oil, butter and GARLIC....lots and lots of garlic. I like to chop my garlic fresh from the bulb and into big chunks. You can use pre-minced garlic but I find it lacks a lot of flavor. So here's the garlic being browned in my coated, cast-iron pan with olive oil -

Now the wine and lemon juice -

Finally, dish it out and buon appetito!! 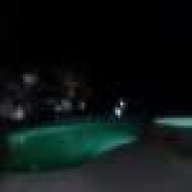 It tasted really good. I had never had wahoo before but I have to say it's a really nice fish to cook with. It has the firm, meaty texture of a chunk of tuna but a very mild flavor. The scampi was really a great sauce to pair it with because it added a lot of nice garlicky flavor to the fish.

Everyone had to loosen their belts after eating that meal ... the chef was pleased
B

Well, in keeping with the fish motif (and the wife wants me to make healthier meals....), I found a great deal on fresh Norwegian Atlantic salmon ($7.99/lb at the local Safeway). So I decided to do it on the grille with lots of added flavor but no added calories. Here it is prep'd on the aluminum grill tray -

The salmon fillets are rinsed and patted dry. I placed them on top of a bed of sliced navel orange with freshly grated ginger (I keep it peeled and frozen for ready use), minced garlic, sea salt & pepper. Before putting it on the grille, I sprinkle the tops with fresh squeezed orange juice. Here it is served on the plate with some mashed cauliflower (cooked cauliflower, sautéed in unrefined coconut oil with one cup of regular coconut milk added) and a salad -

Even though the orange slices totally get charred, the salmon skin remains moist. The intense heat form below, coupled with the steam from the orange slices, drives the oils from the skin and dark meat into the rest of the salmon. I cooked the salmon to an internal temperature of ~135F and the meat was moist and buttery. Very delicious!

Matt you should have your own restaurant, that looks really good!

Steve H said:
Matt you should have your own restaurant, that looks really good!
Click to expand...

Thanks. I worked as a cook in a small, family-owned Italian restaurant in high school and college (about 6 years). I learned a lot about cooking and restaurant ownership. I can honestly say that, while the notion of owning a restaurant sounds like fun, the practical day-to-day work involved and endless hours spent managing it makes me never want to own one...but I'm happy to cook for my family and friends any time :chef:

Mashed taters with buttah, half sweet, half russet


Oh, and I had to move this from the coffee bar to outdoor cooking!

It is actually a forum issue, I'm going to let Lee take a look at it before I fix it.

You should be able to click the attachment link and see them for now.

I love flank steak! Here it is on the "gates of hades" (aka, The Big Green Egg) -

Annnnd served with a baked potato and garlic sautéed spinach -

Much beer was consumed in the making of this meal....

I will see your one flank steak and raise you another!

Flank steak #2 going into a cheese steak soup tomorrow. :chef:
Time to start making soup since there is a cold front coming and it is going to 30!

I don't think I've ever had "cheese steak" soup...please post some pictures :chef:

Then an onion, some garlic and peppers

Lotta cheese, this is white cheddar, a pound will do.

This is the first time I made it with flank steak
YUM!

Wow! That's what we call the "Heart-Smart" special! Love it.

Do you drain the bacon grease or just keep it in the pan?

Side dish for today some Loooseeana seafood dip!

We serve it on raw zucchini slices

JoyfulNoise said:
Wow! That's what we call the "Heart-Smart" special! Love it.

Do you drain the bacon grease or just keep it in the pan?
Click to expand...

It all goes in the pot baby!

And there is at least a stick of butter in there, too!

I love this thread. .. just sorry I haven't seen it until now

Just got a pellet grill - looking for grilling and smoking suggestions