New to pools, have not gotten good advice from Local Pool Store

I am sure you get these newbie questions all the time, but I am stuck and the local pool store has been no help. The store opened the pool and installed a Jandy Salt System and Opened my pool. To say that the opening was botched was an understatement. It a long story about that and getting them to turn on the salt system which I don't want to get into. Needless to say, I have been very frustrated by the lack of support. They just turned the salt system on, but my water is very cloudy and 'old' looking. It has been on for about two days now running at 100% chlorination for 48 hours. I just got the water tested at the store and my FC is 0.14 TC:1.76 and CC:1.62 everything else is pretty good except CY:10ppm. They told me to put 1.5lbs of stabilizer and the water will be balanced. But I don't think that is correct FC is way too low and CC is way too high. I am pretty sure I need to raise the FC to 2-3ppm but I have no idea how, any advice would be greatly appreciated.

Also, I don't know if this helps but I am pretty sure the DE filter is not 100% I know there is air getting into the system, but I am hoping to solve that problem after I solve the water quality problem.

While you are waiting on your test kit, add 5 ppm FC worth of liquid chlorine / plain bleach to your pool each evening with the pump running. This will replenish the FC lost each day to the sun and also inhibit any algae in the water from growing further.
I suggest you read ABC's of Pool Water Chemistry. 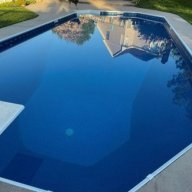 Do what he said. Get a Test kit, liquid chlorine, and follow the SLAM process. You'll get way better advice and help here than you'll get from any pool store. They exist only to make money. But the people here will help you and get you on the right track.

One mistake commonly made is to get a SWG and just turn it on assuming it will build up enough Free Chlorine (FC) and life will be a breeze. Nope... you need to have put in enough sanitizer (liquid chlorine or other forms) so that the FC is *already at* your desired level, then let the SWG *maintain* that level.

Salt Water Chlorinators work slowly.... but steadily like the tortoise and the hare. So if you're starting out without enough chlorine in the pool you'll get algae before the SWG can reach your FC level.

Another thing to be aware of is to *never* put gobs of salt in to the pool while the SWG is powered on. Let it mix in and dissolve for a day with the device totally off.

SO it sounds like algae got into your pool and grew before you could protect against it. Can you get a good test kit and tell us what these values are:
FC
CC
pH
TA
CH
CYA
Salt

You'll probably need to do a SLAM process to rid the pool of algae. You *really* need your own test kit with a FAS-DPD tester as you need to do frequent tests while you SLAM. My preference is for the TF-100 found at www.tftestkits.net or a Taylor K-2006C test kit. Those two are most alike in volume of reagent bottles, but the TF-100 is cheaper.

Can we see a picture of the pool, best taken over the stairs?

Thanks for all the help, I started the SLAMM process and it has really help the clarity of the pool.
P

Hello, I am a 1st-time pool owner and I am having trouble figuring out what this is. I have two normal skimmers and then I have this (see pictures) which sort of looks like a skimmer but it does not have the normal opening to the pool. Instead, there are two threaded holes to the pool which look like pool jets. When you open the cover you can see two threaded holes at the same level as the openings in the pool that look like pool jets, they are about a foot below the pool deck surface. At the bottom of the cylinder, there are two holes with at least one leading to the pump. But it is very deep when I stick my arm in I can barely reach the plugs at the very bottom, maybe a little more than two feet.

Someone was told me they thought it may have something to do with skimming leaves, but they were not sure.

The line leading to the pump, does the pump pull water from this or push water to this device?
P

The pump pulls water, through at least one of the two holes at the bottom.

So it would be some form of skimmer. I thought it might be something called a Deck Chlor - but that pushes water from the pump to the pool.
You must log in or register to reply here.
Thread Status
Hello , There was no answer in this thread for more than 60 days.
It can take a long time to get an up-to-date response or contact with relevant users.