Looking at building a pool / need some feedback

I found bistro lights that are dimmable. So I can vary the amount of light from full down to subtle. I call them bistro lights because of the way I use them, but they are actually just LED xmas light strings in black. Here:

Because I left a good job down in da city, and never do anything nice... and easy...

I encased the light strings in black split cable tubing and then attached that to my fence with stainless steel wire. The fence is black, so from a ways away the tubing is near invisible. I used the split tubing for two reasons:

- Since the lights are exposed to the sun year round, the tubing will help protect the wiring from UV. The tubing has some UV protection, but I expect that will fail eventually, but then I'll just get more tubing. The tubing is considerably cheaper than the lights.

- I carefully aligned the tubing with the split facing down. This forces all the lights downward, and positions them nice and neat and in a straight-ish line. Without the tubing, the lights would point every which way. I felt this was important, and worth the considerable extra effort, because no one in their right mind will ever notice.

I used stainless steel wire because that is impervious to the sun. Plastic cable ties fail very fast where I live. I strung 200' of this stuff! All along the back of my yard!!

And if that's not nutty enough for ya: the lights are not replaceable, they're molded into the string. Which is good because that makes them waterproof, but bad because, well, they can't be replaced. So every eight feet I created a loop that included one light, and stuffed that into the cable tube. If any light burns out or otherwise fails, I'll "un-loop" the spare and re-adjust that 8'-section. I'll loop up the burned out one and hide it. If two burn out in the same 8', I'll use the next section's spare. If three burn out I'll be inconsolable.

It would look great to use strings of these lights in the trees. But the pesky trees have a habit of growing, and needing trimming, etc. So that kind'a takes the fun out of it. So I use the Volt up-lights for the trees, which cause no landscaping maintenance issues. Well, other than being careful not to jam a shovel through the wires...

HDR mode helps a little. Apparently my iPhone is too old for the new "night mode" camera setting...

OK, enough showing off, point was... That was two of dozens of ways I can light my yard. I like a lot of lighting options. Leave yourself ways to expand, even if you can't imagine just now what you'd expand... Extra circuits, extra empty conduits, separate transformers, etc.

It is all so pretty! So many different ways to set it up and use it! Thanks for sharing and showing how it could be done! Dirk

Thanks again, Dirk. Now I think I may want to have at least 2 landscape lighting zones (you were right), one up by the house and the other around the pool, trees, and fire pit we will be building as well.

Sounds good. Volt recommends sizing your transformer to allow some headroom. I forget the number. Like the total wattage of all lights be 80% of the transformer's rating, something like that. Keep that in mind while planning.
O

Highly recommend volt for sure. Great fixtures, and even the higher end brass fixtures with the lifetime warranty are like 1/3 the cost of fx or luminaire, which are egregiously priced.

Been a while since I looked at them, do they have a smart control transformer now or do you control some of the runs w intellicenter or some other automation? I believe intellicenter has two low voltage connections but I imagine you have exceeded that.
Reactions: rcerf

I have my standard Volt transformer plugged into a smart outlet. The bistro lights run off a smart dimmer switch. Volt support doesn't recommend dimming the garden lights, though it wasn't clear if that was because of the lights themselves (the bulbs), or the transformer. I took their word for it and never tried it.

Wow, I thought Volts were expensive. Only 1/3 of others? That's good to know. I've disassembled several of their fixtures and can't imagine any being made better. Volts are solid brass, really heavy, and there are o-rings and other niceties that ensure they'll stay water tight. So far they have, and I have many that point right up towards the sky. 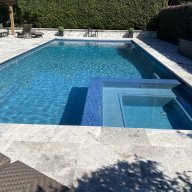 Currently we have a tv on the patio above the fireplace / Bose 151 (pair) speakers on the patio.

Here is a layout of what I'm looking to accomplish for the whole house...

I have a multizone Denon with heos. The problem is that the only way to control multiple zones easily is to use the heos app and it's somewhat of a pain. In the day of controlling your audio by voice, it's not convenient to have to use the app every time you want to do something. Best case, you can get a harmony hub, pair that with an amazon echo, and you'll be able to turn each zone on/off with voice control.

It's more expensive but Amazon has amps you can use to control each zone and then pairing with voice control will be much simpler. You could pair an echo dot with each zone and easily have independent hands free control of the source, volume and power for each zone. Put the dot on a battery base, if you don't have power where you want it, and bring it outside as needed. I have mine permanently outside plugged in. It's in a plastic bag under an overhang. I don't need to see it, I just need it to hear me! The problem with that is inputs, if you want the same input, like from the TV, to run on everything, it's primarily setup just to stream amazon music.

If all that is too much, consider having a dedicated device with a waterproof case to run the heos app.
B

This is good info...I will be mounting an iPad on the patio in a vida mount for the pool controls via iaqualink app so I could just add the HEOS app to this as well. I honestly think it would work best for us to do it this way but I'll have to take another look at what you have experienced and possibly re-evaluate.
B

We finally received the updated rendering that has the fire pit added and makes the overall project look much better. There will be 3 boulder type steps that step up to the flagstone pavers to lead to the fire pit..The increase in elevation is roughly 30" inches. The idea behind this was to create a view from the fire pit that was above the rest of the pool/landscape to "oversee" everything leading back to the patio.

Dirk said:
I have my standard Volt transformer plugged into a smart outlet. The bistro lights run off a smart dimmer switch. Volt support doesn't recommend dimming the garden lights, though it wasn't clear if that was because of the lights themselves (the bulbs), or the transformer. I took their word for it and never tried it.

Wow, I thought Volts were expensive. Only 1/3 of others? That's good to know. I've disassembled several of their fixtures and can't imagine any being made better. Volts are solid brass, really heavy, and there are o-rings and other niceties that ensure they'll stay water tight. So far they have, and I have many that point right up towards the sky.
Click to expand...

at my old house I had a quote for 14 or so lights and it was like 3-3.5k using fx or luminaire. Basically 150 a fixture plus install. One of their newer multicolor transformers is like 3k by itself. It’s just nuts how much they charge, maybe it’s just oklahoma, I don’t know.
Reactions: Dirk
You must log in or register to reply here.
Thread Status
Hello , There was no answer in this thread for more than 60 days.
It can take a long time to get an up-to-date response or contact with relevant users.