I'll be honest here, I've enjoyed this swap. No matter how much I tested, shocked, vacuumed, tested, shocked, cleaned the filter and so on with Baquacil I never saw much from the pool. If I did by the next day it was trashed again. Here it's been enjoyable to see the progress.

As for shocking. She's going to be busy losing her mind with our oldest starting pre-school next week to do much. It's slowly starting to hold it's FC some, so we'll slow it down till Monday.

Anybody else got a baqua pool to swap....I'm thinking a 24/7 webcam for the swap!

Dang! I wish I could take over for the weekend. Would love bumping that FC to the max and burning that Baqua! Talk about having some pool drama to keep you busy! :lol:

I too would love to be there shocking still.....however my wife yelled at me when I suggested calling in sick this week.

Now to keep it going this weekend I've still been pondering this question. It's been said that a higher level of CYA will "slow down the conversion". It would seem to me however it would help it as the FC can bind to something and stay in the pool till needed?? Â I will also add that this swap was started with what appeared to be an outbreak of white mold and algae in the pool. Â

No, even though the CYA "holds" the FC in reserve, it takes more bleach to do the same job. Best to leave CYA alone for now, kill the baqua, get the water clean, then adjust that to save your chlorine.

I'm 100% going to continue to go with the steps listed. I may not fully understand why I'm doing it, but I know so far it is working. Just wondering the best question ever.....why?

BrushPup is totally unreliable when it comes to showing up and shocking your pool. We had a storm move in and added about an inch of water to the pool. I'm sure it washed out "some" of the chlorine, but not as much as I lost. I've already got the questions "when can we swim" from the in-laws as the pool looks better now than I've seen it in....we..... since we drained it a few years ago. I can see the leaves in the deep end, even with the pool light turned off (not like there's an option to turn it on) and the filter is running still with only raising it's pressure maybe 1 PSI. I'm guessing I would have been toying with the loss test if I were shocking all day today and had no rain. That's OK however, the reason I was cleaning the filter out as rather than back flushing was I was VERY low on water. You'll have that however.

Now for the photo's. I've never seen any pool this clear....ever! 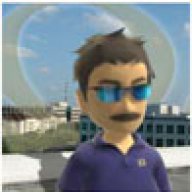 Well, I wanted to come over but couldn't because some knucklehead forgot to give me the address and directions.

Glad you got the FC back up, and can't wait to see that CC number keep on falling.

I must say....felt good not having to add anything this morning.

Should be able to start stabilizing Tuesday if I'd guess.

I must say....felt good not having to add anything this morning.

Should be able to start stabilizing Tuesday if I'd guess.
Click to expand...

Ohio?? Oh nooo, I wont be home in time for work on Monday! (would rather be there honestly). Hey good news and maybe you'll be closer Tuesday. How's it looking today, and what are the in-laws saying now? I bet it's WHEN can we swim? Keep on poundin on it, your almost there. Just curious, how much DE have you gone through?

Call off sick for the week. http://www.primantibros.com/ in Pittsburgh is only about an hour from my house. Lunch is on me.

I stopped by tonight after work to check up on it. Even at night I'm able to make out the bottom of the deep end, with only the moonlight. I've never seen it as clear as it is now, even just after the drain and refill. Test results however show differently. I'm only going to take tonight's results however with a grain of salt as I was beat tired from work, had very dim light to see the test, I was dirty as all heck and wanting a shower, and it was one of those days where the new the new programs that were to make your life easier, decided to keep you on your toes.

Levels at 10pm night 6
FC 0
CC 1 towards 1.5
The color was mostly clear at drop 2 and kept going towards clear before drop 3 hit....but rules are rules.

Added another 4 jugs of bleach and waited about 10 minutes. I'm guessing the levels showed high as I'm not sure 100% of the bleach was spread around the pool, but again.....I was tired. As for the DE. I've taken and showed the fingers every-time I've had to change the DE. I think it was 4 times in total, counting the first day. Our filter takes 5pounds total....so right around 20 pounds total. I'm not sure if that sounds high or not to you guys, however we are lucky to go a week without changing our DE on Baquacil, so cleaning it up from as bad as it was with only one bag was a THRILL!! I've had slight algae outbreaks before with Baquacil where after two hours of cleaning it needed a back-flush as the pressure was too high, and bumping it down did nothing. As of right now, bumping it down lowers the PSI to about 7 and even after ran all day it was still only to about 10psi.

Now for you who can't read....and are only viewing for the photo's.
Steps day 6 8am Again why I hate Baquacil Who wants to fix the wrinkles in our pool? Shallow end day 6 8am Nitro Cleaner to the rescue!! As for the in-laws. My nephew was all set to risk the "algae" that was in the pool, even though we told him it was 6 times the limit I'm going for. We kept him out however with the fact that during the day the FC drops to zero with no or little CYA and it's just begging for another outbreak in that state. No way am I going to risk the money and the time put into this for him to swim before I'M ready for him to. Today my wife stayed home with the kids and rather than visiting her mom-dad they came over for lunch. They had taken a photo of the pool to show my wife just how clear it was.....they were almost floored my wife said when she explained to them that it's still got a ways to go for our new standards.

Just in time for a Labor Day swim party!

I don't think I truly lost 6FC's last night nearly as much as an inaccurate reading by not letting the bleach spread enough. I took a look around wondering to myself where the heck are those last 2 CC's living?? Found them! Behind the skimmer, light, and stairs there are a greenish white goo floating around. Going to take out the light and scrub it then toothbrush around the stairs and skimmer. If we've worked to get it this clean....let's make it sparkle!
B

Doing GREAT! Thanks for the pics, keep them coming!

I don't think I truly lost 6FC's last night nearly as much as an inaccurate reading by not letting the bleach spread enough. I took a look around wondering to myself where the heck are those last 2 CC's living?? Found them! Behind the skimmer, light, and stairs there are a greenish white goo floating around. Going to take out the light and scrub it then toothbrush around the stairs and skimmer. If we've worked to get it this clean....let's make it sparkle!
Click to expand...

Awsome man and thanks for the lunch offer. Just cant talk the boss into it. Seriously though, you probably are still losing some overnight. Just finding what you did hiding out will take a toll by creating demand. And remember...there is still stuff in the piping too mostly likely. It will just take time to oxidize all of it and get it all cleaned out. Looking better all the time and it sure is looking like a real pool now. Hey, do your in-laws realize there are people from all over the country watching and taking interest in their conversion? :lol: If they do and think we are nutz....well they arent far off. But since we don't have much pool drama, we have to enoy someone else's.

I was really wishing to do the overnight test today, however without shocking over the weekend it more or less paused the swap. I almost wonder if I should have just quit shocking all together this weekend...but too Kate now.

Planning on spending several hours again tomorrow shocking hourly again, and vacuuming the problem areas. Let's hope I can get those last few, as I really want the pool stabilized in time for the start of school.
B

Have you seen this chart. I realize it may put you behind in shocking but the family might be a bit happier.http://www.poolsolutions.com/gd/best-guess-swimming-pool-chlorine-chart.html


Leebo said:
I was really wishing to do the overnight test today, however without shocking over the weekend it more or less paused the swap. I almost wonder if I should have just quit shocking all together this weekend...but too Kate now.

Planning on spending several hours again tomorrow shocking hourly again, and vacuuming the problem areas. Let's hope I can get those last few, as I really want the pool stabilized in time for the start of school.
Click to expand...

I don't think you are ready for OCLT yet. Bet you'll have to keep shocking a few more days, but it will be interesting to see where you are with CC next time you run that one.

Might it be worth it to try "Baquacil Line Clean"? I just don't understand why my starting pressure is so high....