The IntelliChem Water Chemistry Controller automatically monitors the pool's pH and sanitizer levels and adjusted them with acid in an Acid Canister and chlorine in a Chlorine Canister.

We do not recommend using the IntelliChem, because the probes often go bad, need to be calibrated or provide bad inputs.[1]

The pH side of the intelliChem is pretty accurate and does a decent job maintaining the pH. The downside though is regular testing is still required to make sure the pH probe and dosing is doing what it's supposed to be doing and replacement sensors are expensive.[2]

The chlorine sensing side uses ORP which has proven to be problematic and unreliable in all pools except those that are covered and have CYA levels below 20-30ppm and even then there are still issues.

If you have a spa it is advisable to pull the incoming flow to the IntelliChem flow switch from the pool return side of the plumbing so when Spa mode is active there will be no flow to the switch.[3] 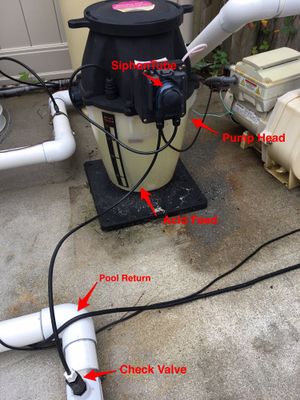 The acid canister has a 3-1/2 gallon capacity container and an internal piercing mechanism to puncture the muriatic acid bottle seal allowing easy filling without spills.

The siphon tube is inside the pump head. It runs on rollers to create suction to send acid to the pool return. They generally need to be replaced every year because they get eaten up by the acid.[4]

The pins that the nylon rollers are riding on inside the pump head can back out about 1/8”, so the rollers are crooked and not putting enough pressure on the tube. Put them back in place and it will work fine.[5]

See around Page 9 & 26 of the INTELLICHEM WATER CHEMISTRY CONTROLLER INSTALLATION AND USER’S GUIDE[8]. It looks like it says ORP Sensitivity should be Off with a SWG.

Follow the * to page 27 in the INTELLICHEM WATER CHEMISTRY CONTROLLER INSTALLATION AND USER’S GUIDE[9].

To get consistent readings:[11]

ORP readings are all over place

This is likely because the probe canister is getting hit by direct sunlight. You can try black neoprene around the canister. The instructions say to install it away from direct sunlight.[13]

On page 48 of the INTELLICHEM WATER CHEMISTRY CONTROLLER INSTALLATION AND USER’S GUIDE[14] it explains “LOCKOUT”. Essentially if the pH goes above 7.8, the assumption is the sanitizer (chlorine) becomes ineffective (it does not but that’s an argument for another day). So it basically shuts off the chlorination system (SWG). You need to manually get the pH below 7.8 and then reset the system.

This is why TFP dies not endorse using these probe-based automated chemical dosing systems.[15] They are expensive, overly complicated and they manufacturers don’t understand the chemistry very well and so they put in silly lockout features like you’re seeing. They are simply more trouble than they are worth. 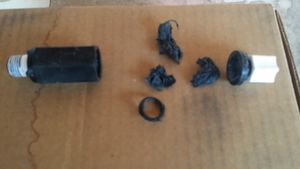 There was a bad batch of plastic that was in circulation, melted and dumped acid everywhere. They only melted at the top and not inside.[16]

If you have purchased the following Pentair Intellichem items since March 1st, 2019, we are contacting you to because they may contain a faulty injection check valve prone to melting.[17]

A replacement check valve, part number 522513Z, is now available for these items, which we can send to you at no charge.

The thing to understand about ORP is that the voltage detected by the probe is affected by every chemical species in the water. Some of those chemical levels change slowly with time while others can change on an hourly or daily basis. Even certain chloramines can affect ORP levels. So it’s not unsurprising to see diurnal changes in ORP. Have you done an OCLT to determine if something isn’t growing in your water? Overnight loss of chlorine should be less than 1ppm and if it is more than that, then you’re battling two problems at once.[18]

The question to answer is this - what does the ORP signal even mean in swimming pool water?

Sure, the ORP correlates to the FC level, but it is not exact. There have been many studies that have shown ORP probes showing a signal level of >750 mV but the solution only has minimal amounts of FC in it. Then other solutions that show ORP signals less than 700mV with high levels of FC. These variations happen between different probe manufacturers and even within the same line of ORP probes. So, in order for you to specifically know what your system is even doing, you have to map out the correlation of FC to ORP signal over a short period of time (how they vary within a given day) as well as the long term trend. Then you might actually have the ability to know with some certainty what your pool water is doing. While it is generally accepted that an water sample with an ORP signal >700mV is considered “sanitizing” that is only true under very carefully controlled circumstances and, in particular, when a strong oxidizer buffer like CYA is not present.

How To Disassociate Intellichlor & Intellichem

If you have the IntelliChem and want to separately take control of the acid and chlorine then:[19]

Step one: Set the ORP hardware setting in the Intelllichem configuration menu to NONE. (Important, must be done on the device)

Now you have direct control over the IntelliChlor from ScreenLodgic, but you can't view or control the IntelliChem.

If you set the Chlorinator to the % value you like, lets say 60% and then return to the ScreenLodgic configuration menu and recheck the box for 'IntelliChem present', you can now control the IntelliChem via ScreenLodgic, and while you loose control of the chlorinator, the chlorinator retains its previous setting no matter what the Intellichem thinks the ORP is, the SWCG stays at the 60% you set directly.

Now when you want to control the SWCG, you deselect the 'Intellichem present' from the ScreenLodgic configuration menu, make any adjustments you like to the SWCG, and then recheck the box for IntelliChem present to view the probe values and manipulate the IntelliChem.

ScreenLodgic will still show "IntellliChem in Control" on your Chlorinator page when its check box is selected, but no commands are sent to the cell, and you'r chlorine production is not affected.

Read How to upgrade the Intellichem Controller Firmware for $20