Circupool is a popular SWG brand due to their competitive pricing and warranty allowing DIY installation. Reports are they also have good tech support and the office is staffed by cordial, friendly people.[1]

Note all gallons and chlorine output below assume the cell is running at 100% 24/7.

Circupool may include a sticker that says "10 PSI max". That is not your filter pressure. They are talking about a differential pressure between the input to the cell and the output of the cell. Since one side of the cell is basically the pool, you will not see anything close to 10 lbs.[2] The only situation where the pressure in a cell would be higher than 10 psi is if you have an in-floor cleaning system. 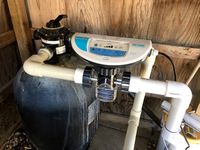 The Edge Series has a simple display using LEDs to show % output and other cell status.

Circupool has a Vertical Installation Kit if you need it.

Keep Control Panel Out Of the Weather

Circupool customer support recommends having a roof or shelter over the control. Even though it's designed to be outside and is "waterproof". They say if you want longevity with control keep it out of the elements, direct sun and rain. [11]

Air builds up in SWG cell

Bubbles Around the Plates

What Causes SWG Cells to Explode?