Construction was supposed to start this week! Unfortunately we’re still waiting on the utility company to mark, it was supposed to be done last week. But trees are down and ground is painted so I’ll keep you posted
Reactions: kimkats and YippeeSkippy

That is the worse thing about having to have someone else do their job!!! GURRRRRRRR for you!! Here is hoping the get a move on it soon!

It's been a while since your last post, so I'm assuming you made all the final design decisions. If not, the delay could be a good thing for you. You should be 100% comfortable with the design well before construction starts. If you make changes this late it really messes up the PB plans and you could be on the hook for a change order which often costs big $$$.

I mean this with best intentions, pool construction works way better for both parties if the owner is 100% certain of their design preferences before the contract is signed. If you're not certain tell them to hold off 'till you are sure about what you want.

The only thing left is the finishes, which we should pick this week or next. We’re excited! Here’s the final design:

The only change is that due to elevation once we got it painted the wall may come all the way around the deep end to the sun ledge. Which is great for jumping and is going to look amazing. I just thought this morning though that I wonder if there’s safety concerns without a place to rest in the deep end. We’re going to ask if he has any ideas this morning.

Here’s a pic of the area now that the trees are gone (pool going on right side, orange spray paint hard to see):

Good point about the deep end and swimmers needing something to hold on it....................Finger ledge! They can make part of the wall come out enough to hold onto with your fingers. Can you "see" what I mean? I will see if I can find a pic of the couple that have been done here.

Your pool looks fantastic and I hope the wall works out for you. I would suggest you confirm the price of these final selections will not affect price and make sure it's documented in the contract or at least by email. 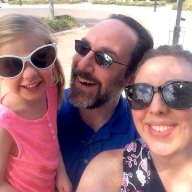 kimkats said:
Good point about the deep end and swimmers needing something to hold on it....................Finger ledge! They can make part of the wall come out enough to hold onto with your fingers. Can you "see" what I mean? I will see if I can find a pic of the couple that have been done here.

Well, dig day drama today. The elevation was higher than he’d previously measured making our wall 3’ instead of 2-2.5’. So here are our options:
1. Continue as planned with the taller wall

2. Do a plan similar to our other original option raising the near shallow end with an 18” wall by the patio (it’s hard to see in the photo)

3. Stick with the 2-2.5” wall and create a short wall/curb/border behind the decking on the high side

Option 2 is my least favorite, we already chose a plan away from that option. On one hand I think how much bigger is a 3’ compared to 2-2.5’? But then I think that’s a big wall. My husband likes option 3. We need to confirm but we asked if there would be any increase to cost with any and he didn’t say, he said he would take the materials from one and use for the other either way, and from the beginning we said we would not increase so I don’t expect any change to cost.

And in the meantime we have this...

I’m a little frustrated but ultimately we chose this builder not just for his plan but because we liked him. And very happy he let us know that it wasn’t as he expected and that he’s giving us options to consider.
C

Love the finger ledge, I think that would solve my safety concerns. And looking at the video that looks like an 18” wall which is definitely perspective.
Reactions: Snikwah
N

18 inches would be the easiest for smaller kids to grab. 36 inches would create a nice privacy barrier for 2/3 of the pool. If you have neighbors behind you they wouldnt see a good chunk of your pool. And it would make for some atomic cannonballs. The middle option has the best of both 1 and 3. Some extra privacy, most people could still hold on and everybody will like to jump from it. Young and old. Don't beat yourself up over it one way or the other. Your design is amazing and any of the 3 options are still going to come out better than most resorts.
Reactions: CarolineOK

Try to get the changes in writing with the words no extra cost or such on it. "What I heard you saying is you would take material from one area and put it in another. As such it is my understanding there will be no increase in cost."

For the finger ledge it can also be as simple as "bumping out" one run of stone if you are using stacked stone. The video shared by @Snikwah is a great option also. This give you chooses with different materials.

I’m thinking about suggesting a stair-step wall, the elevation increases from 18” where the spa is to 36” at the deep end. The awkward part of the tall wall for me is in the shallow behind the bench, where people may want to congregate, vs the tall wall at the deep end is ok because that’s where kids are going to jump. So a wall 18-24” next to spa and around bench, then a step up on both the decking and wall to 24/27” at the narrowing, then a step up on decking and wall to 36” around majority of deep end, and then similar step down near sun ledge. So the wall is terraced, something like this:

But maybe I’m getting a lot more bang for my buck with the small retaining wall behind the pool, it looks like landscaping where before it was going to be concrete and then grass. And he said he’d put lights in the wall, which might look really good. The stair step wall leaves a lot of stairs around the pool, which might be good and might be bad.

I like how steps look leading to different levels around pools. So long as there is enough flat spot for some one to hang around on it should look good. You could put a small bistro table there to make it a special place. The other idea will be neat also!! Okay so write both ideas on a piece of paper and throw a dart at it to see which one to pick LOL They are both great ideas!

+1 for sure. You are at the stage that there are no wrong answers and only amazing answers. Once its done you can sit there and coulda/woulda/shoulda with the rest of us. Its human nature. But your options right now are fanDANGtastic.
Reactions: CarolineOK
C

We talked to builder, going to do a combo of the curb all the way with slightly lower wall AND steps on deck with stair-stepped wall. Great compromise and I’m thrilled!
Reactions: Newdude

Happy Heart! ? Sounds like the best of all worlds!
Reactions: CarolineOK
C

This is a REALLY BIG HOLE. So exciting!

The deep end will be 9’, shallow 4’. But there’s the additional 3’ of elevation on that end.

What a sweet, fun, neat pool that is going to be!!!

So here is what I say at this time in your pool build-------------take your tape measure and plans out to the pool. Check everything. Is it deep, wide, long, etc enough? Add about 8" for steel, shell, and plaster. Water depth should be half way up the skimmer face.