You're getting there for sure. I believe you should see SOME improvement daily until you are crystal clear. You are doing a nice job on your chlorine management. Are you brushing the pool bottom and sides?

I am puzzled by your statement the psi shows zero after you backwash.....you can't have 0 psi when water is flowing through your system.

Two possibilities occur to me: either the gauge is inaccurate at low pressures or the filter cartridge is worn out, allowing water to flow through it too easily until a coating of material has built up. That's what I figure, at least. I ordered a new cartridge yesterday, so I'll know soon if the cartridge is the reason for this. I should probably just go ahead and replace the gauge as well. We had the filter and pump assembly replaced about four years ago and, for some strange reason, the installer scavenged the gauge off the old filter, installing it on the new one. So the gauge is really old -- maybe 30 years or so? It's been accurate enough for my purposes, so I haven't worried about it. But I guess it would be good to know what the actual clean-filter pressure is.

I'm brushing the sides mostly. I do some brushing of the bottom as like continued strokes from the sides as I continue to push down then out on the brush. But my little pool vac is doing such a good job of vacuuming the bottom that there's really nothing left on the bottom right now -- nothing obvious, at least. It also climbs the sides and does them as well.

TFTestkits has a great glycerin filled gauge for about 15.00. A precise working gauge is an essential tool to manage your pool water.

But my little pool vac is doing such a good job of vacuuming the bottom that there's really nothing left on the bottom right now -- nothing obvious, at least.
Click to expand...

Then your SLAM will continue to progress quickly. Keep running the pool vac as it keeps everything stirred up into the chlorinated water and allows no algae to hide hugging the pool bottom.

Home Depot has the same gauge for 12-something plus I gotta go down there and buy more bleach anyway. I bought 8 gallons before I started the slam. I'm down to 2 and a quarter gallons now. I reckon I'm still gonna need a bit more than what I have. So, off I go.

Water quality is getting better, slowly but surely. The pool vac is doing a great job, and I continue tho scrub down the sides with my latest toy, the wall whale. What a back saver!
Last edited: Jun 13, 2019

Get that home depot gauge and then prepare to return it, I think. If it's the one I see on line, it goes to 200 psi and is worthless for pools......your choice

Wrong one. The one I'm looking at is a 30 psi gauges, same as TFP's. Hey, I'd rather pay a dollar sales tax than twelve dollars shipping.

This morning was something of a milestone. For the first time since this upset, I can now see my pool vac when it's down at the 10 foot bottom. Not clear yet, but visible. It's been only three days, so I think we're doing just fine.

The new filter just arrived, so I installed it. It's a Pleatco brand. I'm seeing noticeably more throughput through the jets now. The old gauge, a Hayward 0-60 psi, is now measuring 1 psi with this new filter cartridge in service.

The water clarity has improved noticeably since just this morning. I can see the pool vac clearly as it scurries along the 10-foot bottom of the deep end, but the water clarity is still not there yet. Still a ways from being "crystal." But I'm feeling pretty confident that, by Sunday perhaps, we might have achieved our goal. That will have been six days of shock, which I suppose is not too bad.

I can't resist -- thought I'd show some photos I took of the pool this afternoon. It was overcast, so the colors are somewhat subdued.

A look from the shallow end

And a look from the deep end.

A shot of the pool vac under 3 feet of water.

And a shot of the pool vac cleaning a side in the deep end.

The pool water is approaching a normal coloration, although it is still somewhat milky looking. So I will continue to shock . . . until when I run an OCLT test, it tells me I should stop SLAMming.

I find these early results quite encouraging -- and I owe it all to TFP. Much thanks, guys!

It's coming along nicely! 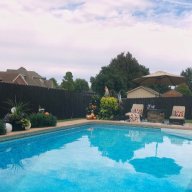 You have done awesome! I have followed your SLAM since the beginning and a great example of slow and steady wins the race.
N

Think about becoming a supporter. It help them keep the site running!

Thanks for the kind words, y'all. One thing needs to be said -- my wife didn't think I could pull this off when I told her we didn't need the pool guy. Heh, I've made a believer out of her.

OK, well, I reckon TFP will end up saving me a fair chunk of change. I'll see what I can afford for a donation or donations and then make my decision.

Okay, I went out this morning at 6:30 am to take a look at the pool, and I think I'm finished. Or at least I will be after the pool passes the OCLT test tomorrow morning. But as it sits right now, the water is crystal clear. I can see the main drain, sitting at the middle of the deep end under 10 feet of water perfectly. The pool has never been so clear as it is now. There is not the slightest visual trace of algae, although I suppose some could still be lurking somewhere -- like the skimmer box, maybe? Out of sight but not out of mind.

So my question at this point is -- do I go ahead and continue to test for FCs and add chlorine? Or do I let the FCs drift down now to their normal level? I guess that, since I haven't done the OCLT test that technically I'm not finished SLAMming yet, is that correct? I think I've just answered my own question.

Yes, keep slamming until you can do your OCLT.

Okay, I'll be running it tonight, for sure. In the mean time, however, the FCs were 15.5 ppm at 11:30 this morning, which required 115 oz of bleach, as per the PoolMath app. I'm hoping this will be the last dose of shock.
D

Your in the home stretch!

If you insist -- not much different from the last bunch. Taken late this afternoon. The pic of the pool vac was taken when it was 8 feet down.

Water's getting a little low. I'm in the process of adding a couple inches.
Reactions: IceShadow

Well, I guess I'm a little disappointed. Despite my pool having crystal clear water, apparently there are some biologicals still extant. My FC readings at 9:30 pm last night were 19 ppm and this morning at 6:30 am they were 16 ppm. So, continuing with the shock, I just added 102 more ounces of bleach, as per the PoolMath app. I'll try the OCLT test again tonight.

Anybody thought about rearranging the letters in the acronym slightly? COLT still works semantically, and it's easier to remember. Of course, CLOT would also work, but somehow it lacks the je ne sais quoi of COLT.
Last edited: Jun 15, 2019
You must log in or register to reply here.
Share:
Facebook Reddit Pinterest Tumblr WhatsApp Email Link