Michael, you needed to continue the slam until all three criteria were met, including .5 or less for CC. Allowing the FC to fall for 10 days means you probably spent several days below the recommended target level for your CYA. With a CYA of 60 your FC target is 7-9 ppm. Your last reported FC was 7.5, so you let it drop well below target range if you added nothing for 10 days.
You need to slam again, and then keep the FC within target range. The slam should be pretty quick since you are not dealing with a swamp. After the slam is completed you should be testing FC once a day so you will get a feel for how your pool reacts to weather changes and swimmer load. In a few weeks you will learn how often your pool needs additional chlorine and you won't have to test as often.

Hold on just a second. I have NOT been neglecting my pool. I've been out there every day skimming leaves, raking leaves from the bottom, brushing the sides and floor of the pool, making sure the pool vac is running (it gets clogged with leaves periodically), and two days ago, I cleaned the filter.

I did check just the chlorine FCs about 5 days ago and it actually hadn't moved much, so I didn't record it. I figured I'd wait until I did another complete test. And today it's overcast again with rain in the forecast, so I can't test CYA reliably -- again. But I'm tired of waiting for a sunny day, so I'll test for everything else -- today!

In the mean time, here are a few photos I took just a few minutes ago, all of the pool's deep end. The bottom is 10 feet down.

I haven't skimmed the pool for leaves yet today. I'll do that after the test. 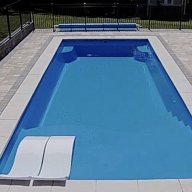 With a CYA of 60 your FC target is 7-9 ppm. That means everyday it has to stay above 7 or you are giving Algae the chance to take over. You have to take into consideration that FC gets used up everyday by the sun, people swimming, organics etc... Until you get used to your pools FC demand you should be testing it, along with cc’s everyday or at least every other day and adding chlorine to bring it back to 9.

When you are tending to the pool like you have been everyday just grab a water sample and test it.

Literally not more than 10 minutes after I posted my above comment, the sky unzipped and it rained hard for a couple of hours. So I just got out there to test the pool. The numbers were revealing, and in a couple of cases, a positive move in the right direction. Here they are:

Per the PoolMath app, I added appropriate amounts of chlorine and muriatic acid (128 oz @ 10% and 50 oz @ 31.45%, respectively). Even though my pump had cycled off for the evening, I restarted it before adding the chemicals and I'm gonna leave it on for a few hours, maybe all night.

I realize having the FCs fall to zero isn't a good thing, but as I mentioned above, I have kept a very close eye on the pool for the least sign of green. Plus, I realized after cleaning the filter that, even if I can't see it, that doesn't mean there isn't algae in the pool. But at least I got CCs down to zero now, and I hope they stay close to that number. Also, my CYA has fallen significantly, which I see as good news. I decided to run the CYA test indoors today. We have a very bright LED lamp in the kitchen that I used for the test and it seemed to get the job done for me.

One thing I need to remind myself of, and probably remind y'all of as well is that this pool loses water at a fairly steady rate -- about 1" per week. I'm positive the loss is because we didn't do anything to isolate the main drain when we replaced the suction line. The old suction line was leaking badly. You could hear it, it was so bad. Sounded like inhaling through clenched teeth. When I replaced the suction line to the pool, I didn't touch the line running from the main drain. To be honest, it didn't eve occur to me at the time. It wasn't until I'd completed the job that it dawned on me that the main drain was why the pool was losing water. We didn't run across a tie-in with the old suction line, but to be honest, we didn't trace it all the way back. Whatever. Water under the bridge. What I need to do is hire a diver to come out here and install a plug in the drain. But until then we'll be replacing water in the pool at a regular rate. Now, the good aspect of this is -- along with all the rain we've had the past more than a week -- we're slowly turning the water over in the pool. And I think that's why I'm seeing lower CYA numbers.
K

Most of the algae is invisible. If you can see any Algea it means you have a lot. You will need to SLAM again, but it should go much quicker this time.

Also the CYA test is fickle. Make sure you test again tomorrow outdoors in full sunlight to get a real reading. The indoor reading is most likely not accurate.

In the summer it won't be unusual to lose an inch or so of water a week to evaporation and splash out. If you start seeing significantly greater loss then you will want to jump on plugging the leak. With the recent rains its kind of difficult to keep track of a small leak.
Reactions: Tpopz

Noted. But just for the sake of tieing up this loose end, I want to get that main drain plugged.

I checked the chlorine level earlier this morning. FCs are 5 and CCs are 0.5. According to the PoolMath app, these numbers are exactly where they should be. So I guess I should check the chlorine levels at least once every couple of days, and add chlorine as needed, correct?

It's still overcast, but the forecast is calling for partly cloudy skies this afternoon, so if we're getting some sun later, I'll retest the CYA numbers.

Add liquid chlorine every day. Your FC of 5 today is on the low end of the range. By the end of the day, you will be flirting with dropping below the minimum FC level.

Even if you do not test. After a short time you will know that your pool consumes 2, 3, 4 etc ppm FC each day. Add that.

OK, I'll test tomorrow, see what it looks like.

The pool water's clarity is still excellent. The NEW pressure gauge on the filter is reading 2 psi, which appears to be a normal amount for this system. Near as I can tell, that rusty beatup old gauge was delivering an accurate readout. I cleaned the filter when the pressure read 4 psi, so I plan to do the same again.
L

Are you still seeing the algae spots on the pool?

I wouldn't really call them "spots." They're very slightly discolored areas on the floor at the deep end. Scrubbing them with the brush has no effect, so I hesitate to call them patches of algae. In my experience, algae is easily dislodged. Might just be normal discolorations because they haven't changed at all.

The above wide angle photo I shot of the deep end (the first of the three shots above), I was attempting to capture these areas, but they didn't show up in the photo. At any rate, that photo includes some of these "patches," so make of it what you will.

cooltouch said:
I wouldn't really call them "spots." They're very slightly discolored areas on the floor at the deep end. Scrubbing them with the brush has no effect, so I hesitate to call them patches of algae. In my experience, algae is easily dislodged. Might just be normal discolorations because they haven't changed at all.

The above wide angle photo I shot of the deep end (the first of the three shots above), I was attempting to capture these areas, but they didn't show up in the photo. At any rate, that photo includes some of these "patches," so make of it what you will.
Click to expand...

If you run your FC a few points higher for an extended amount of time while brushing the pool daily, they will dissipate. It is quite possibly algae stains and that's how you remove them. It can take a week or two.
Reactions: BMeeley

Thanks for that info, Casey -- and you almost answered a question I was about to ask. Namely, with my CYA at 50, what do you guys recommend the stable FC level to be? I have it set at 6 in my PoolMath app, but I suspect that's too low and it should be closer to 8. (The app recommends a range of 4 to 8).

The pool needs topping off now. It's about 2 inches lower than optimum. That should help minutely with the CYA I guess.

You should runon the high end of 8ppm every day. But with your staining, I'd make it 10-12ppm for awhile and brush it every day and see how that affect the stains. Once they are gone, drop back down to a target of 8ppm.

OK, I like your idea. I will put it into action tomorrow.

Tested the pool this morning. Chlorine numbers have moved slightly, indicating I've probably got some algae growing somewhere. FCs dropped to 4.5 and CCs went up to 1.0. So, I did as Casey recommended, bumped the "required" level of FCs up to 10 and Pool Math app showed I should dump 1 gallon and 2 cups of 10% chlorine into the pool. Which I did. I'll check the chlorine numbers again tomorrow. I'm curious how much they will have dropped.

It's been a week since I've cleaned the filter, so I'll take care of that tomorrow and empty the leaf canister while I'm at it.

With a CC of 1, you should complete a full SLAM and then after a couple days, do an OCLT to see if you pass. If you pass, keep your FC at 10 or 12 ppm to rid your pool of the organic staining. How does your water look right now? Is it green?

No, the water is still crystal clear -- looks the same as it did in the above photos. It's because of the water's clarity that I've been hesitant to start another SLAM. But if that's what it's gonna take to get the CCs back down, I guess I don't have much choice. And I'm gonna have to go down to Home Depot and stock up on my chlorinating liquid. The PoolMath app is recommending 2.3 gallons @ 4.5 ppm, which is probably about what I've got on hand. I may have just a bit less. I'll need to go check. But given that I dumped 1 gallon and 2 cups today, maybe my FCs are high enough now where it will require less. I'll run another test once I'm up for the day (it's 4:30 am right now).

I would not do a full SLAM just yet. CC's go up and down on a daily basis and 1 CC (while not where we want it) maybe .5 CC today and that's just fine.

I would suggest elevating the chlorine to about twice what's called for in the FC/CYA chart and keep bringing it back to that increased level for the next few days.