How to tell if my AquaRite SWCG is working

You are using an out of date browser. It may not display this or other websites correctly.
You should upgrade or use an alternative browser.
Y

It's a long story involving a worthless general contractor pretending to be a pool builder, but I'm finally trying to get my SWCG up and running. The pool was filled with water around November of 2019 but the heater, lights, automation, waterfall valve, and SWCG weren't setup. After many dead ends with the contractor, I finally had Pinch A Penny come out in December 2020 to finish setting up everything. They got the heater, lights, valve, and OmniHub all up and running. They setup the SWCG but weren't able to check its operation because the water temp was too low.

Now that it has warmed up with water temp in the high 60s and air temp approaching the 80s, I am trying to get the SWCG up and running so I don't have to keep chlorinating with bleach like I have been doing for over a year. Salt has been added and tests with the Taylor K-1766 indicate my levels are 3,200 ppm. The AquaRite panel levels were strange with the instantaneous readings always reading -0 and when I tried to turn it on using the app the panel would eventually flash the check salt and inspect cell lights. I think the issue was due to an incorrect salt cell selection. The panel showed "t-15" using the diagnostics button but the the Omni app showed "T-Cell-9". I have a TCELL925. I found the instructions and changed it in the panel from a t-15 to t-9. Now my panel reading is 2,800 ppm for average salt and -2,900 for instantaneous.

After changing the salt cell size in the panel setting, I can turn on the chlorinator in the app and the panel doesn't have any flashing lights. I think it is working. The only thing that gives me pause is when I view diagnostics in the app it doesn't have any readings for instant salt and the cell current or voltage are N/A. But when I check the panel display using the diagnostic button there are amounts for those, at least I think so but I don't know the order, just that the instant reading is the number with the minus sign. I vaguely remember Pinch A Penny saying something about you can't use the app for any reading other than average salt and maybe there was going to be an update in the future that would allow for that.... They did update the firmware when that came out so future updates could be done over the internet instead of having to do them via a USB drive.

Can anyone comment on the Omni app readings for the SWCG and any potential updates?
Y

Yellarcat said:
Does the instantaneous reading only show the salt level when chlorinating?
Click to expand...

JamesW said:
Correct. Turn the percentage to 100% and recheck all readings. Reverse polarity and recheck the readings.
Click to expand...

And how do I reverse polarity...
J

Turn it off and then back on.

So it sounds like its working if you are seeing numbers at the controller panel, but you are not seeing it in the App. Is that the issue? James is the best at troubleshooting SWG issues, so follow is instructions to the letter.
J

Does your Omnihub have the optional Hayward daughter board for the Aquarite?

The manual shows the controls available in Omnihub for the Aquarite.

JamesW said:
Does your Omnihub have the optional Hayward daughter board for the Aquarite?

The manual shows the controls available in Omnihub for the Aquarite.

Yes. It came with a small board that they had to install to the Aquarite panel.

Go to the chlorinator page and press the diagnostics button to display the information. See manual linked in my previous post.

The screen for the chlorinator diagnostics on my omnihub panel is missing the the three buttons on the top right for reverse polarity, restart avg salt, and reset timer. See pictures.
Last edited: Mar 20, 2021
Y

Ok. I'm not sure what else to try.

Maybe see what Hayward has to say.
Y 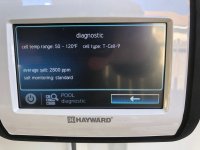 So it's not just me. There should be the 3 buttons there, correct?
J

I think that it should have the three buttons and I would have thought that it would also show the instant salinity, temperature, voltage and current.

It’s definitely possible since it was set up with a t-15 cell in the aquarite panel before I corrected that and wouldn’t even work. After I changed it to a t-9 it started working. I guess I need to get someone back out to look at it again.
J

Make sure that the daughter board is connected correctly so that it can communicate.
K

Yellarcat said:
The only thing that gives me pause is when I view diagnostics in the app it doesn't have any readings for instant salt and the cell current or voltage are N/A
Click to expand...

I can confirm with this is also how the app functions for me with the Omnihub. There is very little info available in diagnostics, but the ability to change percentage from the app works flawlessly. I believe functionality increases with OmniLogic version and omnihub uses the same app so we have some dead buttons which don’t function the same.

if you turn it to 100% you should see numbers other than zero from the control box itself. That’s how I check mine!

P
Daughter board for Omnicell?