What is the pool water elevation compared to the pad?

If it isn't that much lower, you shouldn't be siphoning that much out of the tank with the pump off.
L

The pad is higher than the pool by about 6" - about what it drained from the tank.

6" is much less suction than what the pump will produce so my guess is that the buttons you are using somehow allow for more flow when the pump is off than when it is on. This could be due to how they are constructed. Some require a certain amount of pressure before they seal properly and for low pressure are basically wide open. That is the only way I can think of that the tank could drain while the pump is off but when on, it flows at a slow rate.

You might try other buttons or one of the valves that were posted in this thread earlier. Another option that I thought of trying but haven't yet is to use a hose clamp around a pipe with the feed hose going between the clamp and pipe. You should be able to tighten it enough to reduce the flow to an appropriate level. Again, I haven't tried this but I might just to see if it works.
L

I was able to stop the air leak - the drip buttons needed some glue around the outer edges. However, I ran a test with both no drip buttons and with them in line and both cases I had the acid tank drain a bit. I can't figure it out, but somehow when the pump is off, the acid is seeping into the pool plumbing. But unlike the other times, there is no air getting in.

It has to be the type of dripers that you are using. It's the only thing I can think of.

Here are the ones I use. Homedepot carries them.

I do have different drippers. Next time I get a chance, I'll stop by HD and get some like you have. If it does not work, I can always use them in my irrigation system. And then I'll look into a small solenoid valve that I can hook up to the pump timer to only open the line when the pump is on.
L

I use to have one but not anymore. For me, it didn't do much good since the water level is near pad level anyway. If you have one with a spring, then that might help the pump is off. My only worry is that if it is in-line with the acid, it could dissolve the spring fairly quickly.
L

I rummaged through a bunch of old parts and found a small stainless metering valve. I'm going to get rid of all the drippers and put that in line and see how it works. If I still get the siphon problem when the pump is off, then I'll try an aquarium check valve. There are two kinds - spring and rubber flapper. I'll post an update when I've found something out.
L

The metering valve had metal in it, but when I was at the pet store buying a check valve (flapper type - all plastic and rubber), I also picked up a manifold for air pumps which allows a small bit of metering the flow. Anyway, with the check valve I have finally been able to stop the small flow when the pump is off. And with the valve, I can now adjust the flow without adding or removing drippers.

It is still going to take a week for me to get the flow just right where I feel comfortable checking the pH only once a week.
L

I just wanted to update on my system as I think I've finally gotten all the bugs worked out and have made it as simple as possible. Its been working perfectly for about 5-6 months now.

A big thanks to Mark (mas985) for starting this thread and sharing his invention with us. I basically copied him except I had the problem of the acid siphoning into the pool when the pump was off. To fix that I had to put my tank at the same level as the pool. I dug a small hole near the equipment pad and put a plastic container in the hole, then put my acid tank in the container. That way I could still see the level in the tank.

I drilled two holes in the acid tank. One for the vent which I pushed in an irrigation dripper just to keep debris out. The other hole is for the feed hose. I cut the end of the hose at an angle and pushed it into the tank leaving it off the bottom by about 1/2" so it does not suck up any debris that gets in the tank.

I have a plastic rubber bladder type check valve bought from a pet store used for aquarium pumps in the feed line. The check valves with metal springs won't last, so it has to be the all plastic / rubber type. This keeps water from going into the tank. I also have an irrigation dripper in line. Don't remember the gpm, but I tried various combinations and found just this single one works the best.

I went through lots of valves that I had laying around the garage. In the end, I found the 15 cent dripper irrigation shut off valve worked best.

I tapped into the suction side of the main pool drain line. By doing it this way, I don't need a systolic pump and I'm not injecting acid when only using the spa.

Thanks for the update. I'm glad everything is working out ok. Being in a hole should also help keep the tank out of sunlight. What size/type tank are you using? Also, what brand irrigation valve is that? I have found certain ones fall apart after only a few months of operation in acid so I am interested in ones that will last longer.
L

The tank is a 7 gallon I think. Got it from work - it had mineral oil in it. The valve came from a big irrigation store here in town and it was just in a bin with no bag or identification. It has not fallen apart yet, but then my acid ratio is around 6:1.
A

Thinking of building one of these for acid dosing ...

What is the min dilution recommended for pre-heater injection?

I'm also thinking of using an electronic valve to control the flow and a float switch in the acid tank.
L

az1324 said:
Thinking of building one of these for acid dosing ...

What is the min dilution recommended for pre-heater injection?

I'm also thinking of using an electronic valve to control the flow and a float switch in the acid tank.
Click to expand...

There is a great write up on min dilution and how to calculate dilution rate in the very first post of this thread.

Why would you want to use a float switch and electronic valve?

The whole idea of this setup is to have a contiuous very slow flow of solution while the pump is on. This keeps the dilution at it's highest and the PH of the resultant water only 0.1-0.2 lower from input to output so the equipment is not exposed to low PH. By regulating or turning on and off the flow, you will need to reduce dilution to have the same effect which will increase the risk to the equipment.
A

Yeah I guess I am going out of my way to avoid using a peristaltic pump. I have 2 pools on separate plumbing and one has a shared spa. I was going to use a shared acid tank and wanted more control over the flow even at the low rate. I guess I could just use two sets of drippers and check valves to get different flow rates for each pool. Then I could use the pool suction to avoid dosing the spa. I also want to avoid frequent tank refills so I'd like to keep the dilution at 2:1 max. The float switch would be a failsafe to avoid sucking air and maybe send an alert through the automation system that the tank needs to be refilled. I thought I had found some cheap electric valves that could be used with acid but I don't think they can after all so I might just go with some cheap peristaltic pumps.

You shouldn't need lower than 2:1 anyway but you may need a bigger tank or dual tanks to lengthen the time between refills. I am now running on two 5 gallon Home Depot buckets with the lids to get a month of run time in the summer. Also, be aware that using any metal parts, unless acid resistant, will likely fail fairly quickly. 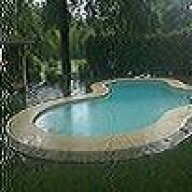 Just set one of these as a liquidator for chlorine. 5 Gallon bucket with 1/4" tubing connected to the drain plug on pump suction side.

I had four 1/2 GPH drip buttons and the level in the bucket went down 2 gallons in 4 hours, so I figured 1/2 gallon per hour. I added 4 more drip buttons today to lower the flowrate, and it went down a Gallon in 30 minutes???

Any change in your valves settings can have an effect. For example, with or without: solar, cleaner, spa, etc. The draw rate from the tank will be dependent on the number of buttons but also the pump suction.