Can we get a pic of the repaired area? I'm curious as to how well it turned out!
R

Rhanna said:
Thanks for the suggestion, that would have been difficult since we started filling last Thursday and we are just now finishing up. I'm also using a spigot from my neighbors house to help fill it faster
Click to expand...

Still waiting, not very surprised. We've decided to go with Belgard eastwood coping around the pool and then brushed concrete for everything else. The plan is to pour this week but we'll see. We are still enjoying the pool but it's starting to suck not having a deck to stand on. We are getting a good amount of mud on our deck since we have 2 dogs and a kid running around the lawn. I laid 20 stone pavers 12x12 between the deck and the pool's edge.
Reactions: Apsuhead
R

PoolBrews said:
Can we get a pic of the repaired area? I'm curious as to how well it turned out!
Click to expand...

This is a photo of the general area. I can see if from this distance but I also know it's there.

This is the close up

I'm not sure what to do with this part of the lawn. It's hard to tell the elevation but the gravel is about a foot higher than the dirt/grass. Of course they had to build of that corner of the pool to make it all level but you can clearly see that the elevation isn't the same. Maybe I'll order some topsoil and grade it towards the bottom of the fence.

You could build a very short raised edge, and then either pour more concrete or install pavers to increase patio and seating area near the pool. That is what I would do, but as kimkats said it's not my wallet! in my experience, you can never have enough patio area!

Thanks for the pic of the repaired area - it turned out OK. Like you said, no one else will see it, but you'll always know it's there.
R

The electrical inspector came by yesterday and failed us. I guess there was a misunderstanding between me, the builder, the electrician, and the inspector. I kept asking the builder if it needed to be inspected before the concrete was poured. Obviously I didn't want them to pour everything and then fail the inspection because they never saw the bonding around the pool. Well the builder asked the electrician and I guess the electrician thought everything was done so he called for the final inspection and we don't have anything poured. He left a sticker, failed, stating the halo must be buried 4-6" in ground.

I guess the inspector was ***** that he was called out when everything wasn't done. He told the electrician that he saw kids swimming in the pool and if he came by and saw people in the pool again he would do something about not letting us use the pool. Anyway, no one was even in the pool yesterday so I know he was lying but clearly we've been using the pool.
Reactions: kimkats and Apsuhead
R

coping was installed today and we should have concrete next week. I’ll be real happy when I don’t have to worry about so much mud

I'm jealous of your length!!
D

Thanks everyone, couple of questions
Should I run my robot vacuum to pick up all the debris from the concrete guys?
The Ph is really high now 8.5. I’m assuming because of the mortar. Should I add acid or wait until the pool is clearer? Should I stop running the pump so that high Ph water isn’t going through my system?

High pH water will not harm your system; low pH water is acidic and may.

Add acid to lower your pH into the 7s.

Run your robot to clean your pool.
Reactions: RHanna
R

I think we like to look of this coping when it is wet over the dry look.
I'm pretty sure I need to clean the pavers before sealing and I've read several people say you don't have to seal your deck but I'm after the wet look. I know it could end up making the coping slippery, so does anyone have a recommendation for a sealer that gives the wet look but isn't slippery?

My neighbor has had terrible luck with his sealed coping. It is a brown color and gets very hot and is super slippery ... like ice. He has tried a new sealer every year and nothing has worked. He has gotten very expensive ones and still the same result. He has put it on thick in the spring, but it bubbles and fades. He’s tried putting it on thin, but it wears off quickly. Hopefully you will get some good advice. I would leave it untouched if it was me.

Has he tried putting aggregate in the sealant?
R

Concrete was poured yesterday. We are almost completely done with this build. They just need to come clean up and I want them to haul off the big pile of dirt in the corner, there is also a lot of crushed rock in that side of the lawn that I want them to clean up.

I am concerned about this corner. It's about 1 1/2 - 2 feet higher than the area around it. I'm not sure how to handle this. Should I use some of the dirt that's piled up next to it and back fill. 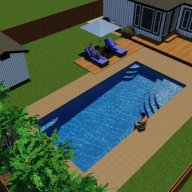 Looking great! I’m in Memphis going through the same process. You might have said somewhere already, but what type of coping did you go with?
R

The coping is from rosetta hardscapes. Bullnose, I think the color was ridgestone
Reactions: Apsuhead and CircaSurvivalist

You will need to really build that area up to get and KEEP the dirt there. You do not want to risk it raining and washing any more out from under there.

U
Divot in Fiberglass

A
Recommendations for fiberglass pool builder near Madison, Wi

Is it even worth considering an in-ground vinyl?