Closing difficulties with cartridge filter and pool level above equipment

My pool closing cost was included in the build so they closed it last year. I was not able to be there so I'm not sure how they closed it. They charge $315 so I am trying to do it myself this year. I lowered the water to about 2 inches below the skimmers but could not get a shop vac to suck the water out of the skimmers. I also tried connecting the kids' bounce house pump (which blows a TON of air) and my commercial backpack leaf blower to the drain line in the cartridge filter to no avail. My pool is on a hill and approximately 5' above the equipment pad, which is also about 40' away. I also have a check valve on the return line going to the main pump, but no check valve on the waterfall pump.

What is the best way to blow water out of these lines? Should I order a Cyclone pump? Should I buy some fittings for my pancake air compressor and try to use the drains in the pumps? Where else can I connect an air supply source? I'm pretty lost here because I'm trying to push water up hill and like 40'+. I've done lots of searching but I am having a hard time finding others with a situation like mine. Any help is greatly appreciated!

Here is a picture of my equipment pad. The right hand side is the filter pump where the check valve is, on the line leading right into the pump from the pool. The left hand pump is for the waterfall. 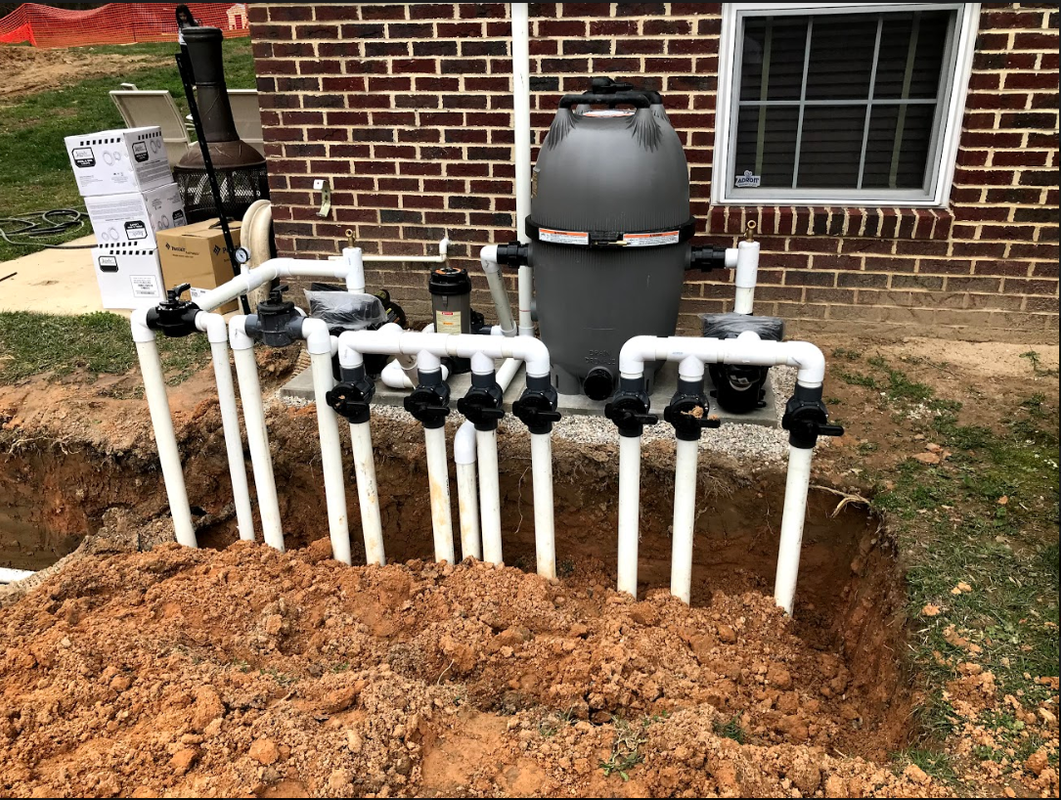 A cyclone is a great investment for you yes!

I do all my blowing from the pad, to make it easier for you, I would lower the water below the returns or use duck or bungee plugs on all returns.
C

Thanks. Where do you connect the Cyclone to blow air?
C

I did some more reading and it looks like some are modifying a spare pump cover and connecting the Cyclone there. That seems like it might be the easiest method in my scenario because the waterfall pump drains are right next to some plumbing and there's no way I could get anything to thread in there. Even the drain plugs are hard to get back in.

The question is, when I connected my leaf blower (454 CFM) to the drain port on the cartridge filter, why didn't I get any bubbles anywhere? From my reading the Cyclone is only 140 CFM so I should've definitely seen the air go somewhere.
P

The leaf blower isn’t strong enough to move the water, it’s designed to blow light things, not heavy water. The cyclone or big blue were designed for pools.
N

I use a 916cfm blower. (Redmax 8500). It obliterates the water in the skimmer/return pipes. Once the bulk of the water is out it shoots a violent spray of water drops 15 ft. Even with all that power it won’t blow bubbles out the main drain. I just let it run a bit letting it push as far as it will get and close the valve, sealing in the air.
N

Hey Captain, What about using a shop vac to blow from the returns and skimmers. it will probably work a lot better if you blow downhill instead of up. Then use the shop vac on suck at the equipment pad. I use a 10 ft piece of garden hose and twist and turn to snake it a good ways down all the pipes. Then I duct tape that to the shop vac hose (making a seal) and it gets out everything the blower can’t.
C

Thanks, that's a good idea but I would be worried about main drains and I have 4. I also have 3 floor returns.

I guess I will just bite the bullet and order a Cyclone. I did buy a spare pump cover and a few parts to make an air injector as that will be much easier on the waterfall side. I still have a hard time believing that my leaf blower or the kids' bounce house pump will be that much less air than the Cyclone, but I'm gonna find out!
N

I was going to try my bounce house blower this year. It was actually from a giant waterslide but same difference. It was so buried in the rafters of my garage i didnt want to waste 30 minutes getting it out. It probably wouldn't have worked anyway. It had alot of cfm but very little psi. I could put my hand over it and stop the flow easily.

If you are going to spend that much money on a cyclone, take that money and buy a real compressor. The cyclone is an expensive one trick pony for a regular homeowner. A compressor can be used for many other things.
C

Thanks. Any thoughts on a "real compressor?" I have a pancake compressor with a pressure regulator on it that I've been thinking about trying, but I feel like that is high PSI but low volume and won't do the job either. I didn't have any mechanism to connect it to the pumps so I didn't even try it.
N

Yeah, you need one that can supply constant volume/continuous run. The $300-$400 price of the cyclone should be able to buy a plenty big enough compressor. Just check the actual specs and reviews. My pancake compressor was great for the nail gun but useless for anything else. 125 psi !!!!! For 1/50 th of a second maybe.
C

Thanks, I appreciate the info. After reading what you and others have said here and this thread, it seems easier to just go ahead and get the Cyclone and see how it goes. Maybe I'll leave it unopened and try the air compressor first, but between four big drains in the deep end, three floor returns, 9 wall returns, 2 pumps and attempting this by myself, I think I'll save myself a lot of frustration. As hard as it is to spend $345 shipped on a once-per-year device, the pool company charges $215 just to blow out the lines and dump in antifreeze (or $315 for the full closing), it will pay for itself pretty quickly.
N

Oh yeah. It will basically be free the second year instead of paying the pool company. After that it will 'make' you money.
P

You will not regret buying the cyclone. Why not offer some help to neighbors or friends with pools.
N

I didnt go crazy researching but found this one compairable in price that would work for the pool and many other pool floats, flat tires etc. You will have to make an adapter either way. I cant get over the one use cyclone. Unless you're rich and have enough free storage space for it to take up 364 days a year.

An air compressor will not blow main drains. A cyclone will bubble it like a volcano. In fact, I’ve done it for parties with the kids, it’s quite fun to float over the bubbles.
Reactions: Captchaos
N

Pool_Medic said:
An air compressor will not blow main drains. A cyclone will bubble it like a volcano. In fact, I’ve done it for parties with the kids, it’s quite fun to float over the bubbles.
Click to expand...

And actually i forget what it was but another member found a 2nd use for his cyclone, and you with the party bubbles.........so i stand corrected..... its a THREE trick pony. $100 a trick is more reasonable.
C

Pool_Medic said:
An air compressor will not blow main drains. A cyclone will bubble it like a volcano. In fact, I’ve done it for parties with the kids, it’s quite fun to float over the bubbles.
Click to expand...

Well there are some new developments here. I purchased and received a Cyclone, a spare pump lid, and the plumbing fittings to make a hose barb connector.
First, the Cyclone. WOW! This thing can move some serious air. It took a bit to push the water out of some locations even with that so I don’t think a shop vac or anything else would’ve fit the bill.
Second, I bought the wrong pump lid and spent two hours with my Dad trying to hold the hose in various locations by hand or with duct tape with very little luck before I gave up and cut a hole in the pump lid I already had.
Third, I think my pool is more complicated than most and 1) the valves are not installed the same (open position on one is not the same as open on the one right next to it, very annoying). 2) The labels wore off so I had to figure everything out on my own.
Finally, I have 9 wall returns, 8 of which are on the filter pump plumbing. 4 in the tanning ledge and 4 more in what I call the poor man’s hot tub. The tanning ledge went fine and I was able to plug them after blowing out all the water. But the poor man’s hot tub returns it seems like it just kept spraying water, even after letting the Cyclone run for 10+ minutes. I triple and quadruple checked all valves so I have no idea what the issue was. It wasn’t a ton of water spraying out but it was more than a mist and is worrying me. I hate to spend $215 for the pool company to do 10-15 minutes worth of work because that’s all that is left. Any thoughts on why water was still spraying out? Can I just dump a bunch of antifreeze down there and call it good?
N

You can’t ever blow all the water out if the pipe has a vertical section. When the pipe is full it will push it hard enough to Make it through the vertical. When there is only some water left It will start to move but the air will just go around the water and the water will fall back to the lowest point. Whatever water is stuck in there is not a lot and can freeze due to having plenty of room for expansion. A gallon of antifreeze per pipe is added insurance if you chose (I do) before capping the lines.
You must log in or register to reply here.
Share:
Facebook Reddit Pinterest Tumblr WhatsApp Email Link

Clearing pool algae by shock and not cartridge filter?