How to Prevent Intex Pool from Rusting

Rust is a common problem with Intex and other above ground pools. AGPs are typically outdoors, and are exposed to the elements, and moisture. As such, rust will form. Its inevitable, however, we can slow down the process a bit and take precautions.

It seems the rust forms on the inside of the T's and legs. The coating Intex puts on the outside helps, but if the inside is not coated, then it will rust.[1]

Some of the things that members have tried are described below.

Grease everywhere that the poles connected to avoid rust. There is apparently a YouTube video that shows this technique.[2]

Spraying everything with 2 coats of Rust-Oleum.[3]

The best way to prevent it is to coat the inside and edges of the uprights and fittings before installing them. Dip them in some good enamel paint and hang them to dry and them assemble it and touch up any scratched areas.[4]

Flaps to Prevent Water Splashing Into the T-Connectors

Cut a flap of vinyl and glue it to the inside of the pool (being sure to also glue it down to the vinyl hanging over the top rail) and then hang it over the edge. The flap hanging over could easily be secured to the leg with a zip tie, or even a magnet. 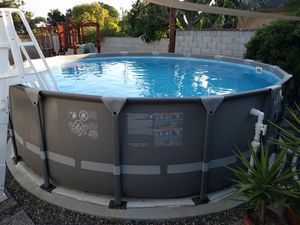 Flaps were patterned and then cut out of vinyl coated PVC fabric and glued with HH-66 vinyl cement. The black "buttons" are strong neodimium magnets. They came epoxy coated but I'll probably use the leftover Rust-Oleum I used on the support poles to paint them gray as well.[5]

The bottom of the flaps are square and rolled underneath. This forms two funnels on the sides of each flap that blocks water from reaching the t-connectors and allows any water coming in on the sides to flow out the bottom. The magnet holds the folded-in corners to the upright.

The inside of the pool is now completely sealed, no water can splash through the openings and get into the t-connectors now. Of course this mod depends on the through-the-wall skimmer I had added previously to ensure the water level has an overflow point to prevent accidental overfilling.

Put foundation coating on the side of the pool

Put foundation coating on the side of the pool before putting dirt around it. Use a foundation coating, like Henry’s, rated for steel and all other types of metal. If you have sand on the bottom you need to put some material that will stop wash out.[6]

The Henry’s stuff you can paint on and it gives you some extra protection.

The XTR pool has two big advantages over the regular Ultra Frame and Prism Frame. The XTR pools are powder coated on both the inside and outside, but even more importantly than that is the fact that the XTR pools also use galvanized steel. Galvanized steel is much less prone to rusting and even if the powder coat is scratched or damaged and water and salt and chlorine is able to get to the bare metal it will be much less likely to rust due to the galvanization.[7]

While you can coating the inside of the metal parts on Ultra Frame and Prism Frame pools to help protect the bare metal there and while that certainly can’t hurt, in the end it may not help because those pools are not made with galvanized steel. If there is a little scratch or damage to the coating anywhere that water and salt and chlorine can get to the bare metal then it will start rusting very quickly and easily.