The New Pentair SuperFlo VS or VST??

Moved from here.. New Pentair Superflo VS and interface with Jandy RS

I recently got a SuperFlo VS for water features & I have the latest revision iAqualink automation w/ RS-8. Right now my SuperFlo is hooked up via high-voltage relay, so it's on/off only. I'd like to be able to control speed via iAqualink automation, though I'm uncertain what my options are with this specific pumpo.

I've checked everything on the pump, it all says "SuperFlo VS" (and *not* VST). My PB installed it, I'd *expect* it to be new, but I cannot find a manufacture date anywhere on it thus far. Any guidance/ideas on how to figure out if I can use the RS-485 interface, or if I'm stuck & will have to use up relays?

Alright, I wasn't looking close enough. My pump is model # EC-342001 and was manufactured 05/19/2021. I think that means it's a "SuperFlo VS" (not VST) and, despite it's date of manufacture, is unable to communicate via RS-485 interface & instead requires low-volt relays. If anyone can confirm, would appreciate it, but that's my understanding.

This is the manual for your specific pump (SuperFlo VS manufactured after 11/2/20) found on Pentair's site under Resources/Manuals.

RS-485 connectivity is addressed starting on Page 5 to Page 6:

Based on that... it's still ambiguous to me, heh.

It *sounds* like the thinking is that my "SuperFlo VS" -- manufactured 05/19/2021 -- is the same as a "SuperFlo VST", despite their product data on model number indicating differently ? So the "round" data terminal -- it will accept [and work with] an RS-485 cable [to my Jandy iAqualink RS-8]?

The way I read it is the SuperFlo VS does not work with the yellow/green two-wire connection via the RS-485. You can use the RS-485 to connect to relays for speed control as shown in Figure 6B.

I personally doubt the VS has the RS-485 capability, but I've been wrong about 100 times today alone..

I hope I am wrong, because I'd like to see people with the new SuperFlo VS be able to us the RS-485 link..

If I were in your shoes, I would call Pentair and see what they say.

From everything I have looked at on the Pentair site, the Superflo VS pumps, Trade grade or EC or regular, manufactured after 11/2/2020, have RS485 control.

Now if that works with the iAqualink, I do not know.

I read on page 5 (under Fig 4) that you may have to use the IntelliFlo VS designation on your AquaLink automation. 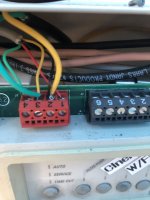 I spoke with their tech support for both pumps & automation, and the consensus was that the "VS" (without the T) = doesn't matter when it was manufactured, it can only do the 'digital input' with multiple wires & relays. I ordered the digital input cable; I'll probably test it out w/ it wired up to only 2 wires, just to see if maybe it does work, but worst case I'll be able to do basic automation with a relay or two.

Visually, it actually looks like a VST -- but they seemed adamant that it won't work with the 2-wire RS-485 connection.

Bummer, I think. Was originally supposed to get an IntelliFlo but, due to ongoing equipt. & pats shortages, we largely had to take whatever we could get for this specific [water-feature] pump.

And of course, the 8-conductor version of the data "adapter"/wire (P/N 356324Z) is not available anywhere that I can find -- my local large Pentair distributor tells me they don't see that part number in any of the over 300 warehouses they can search. =(

That means I'll have to order P/N 353129, as mentioned above, and that one only has 6-conductors. Specifically, it's missing the two conductors that are used for RS-485 communication.

Does anyone know the pin-out design -- as in, which pins are the RS-485 comm pins? I may try my hand at soldering something together just to test & be positive that RS-485 is/is not on this recently-manufactured SuperFlo VS.

Also, the P/N info in the manual shows the following..

You should be able to look at the labels on your unit and see which set of parts you have.

It's got 8 pins. I *think* it is a standard M12 port w/ 8-pins, which would mean something like this likely would work (assuming my unit does have RS-485):

I'll be right back with pictures; my P/Ns differ from both of the sets of P/Ns that you listed, it seems....
A

They were too large to attach directly, so uploaded them on Imgur -- sorry if that's frowned on, I couldn't find a way to quickly optimize/reduce filesize. =D

Look at the cover of the drive unit,, See if you can see any part numbers...

I am just using Pentair's manual.. It lists different part numbers for units with the RS-485 and units that do not have the RS-485. Even though they all were manufactured after 10/15/20.. If every unit built after 10/5/20 has the RS-485, then what is the point of having two different P/Ns??

I made a similar mistake of buying a SuperFlo VS motor with Pentair Intellicenter automation. My understanding is that this motor is not RS485 compatible. The cable that goes to the motor is base on dumb relay connections one wire per motor speed. I am in the process of constructing my pool and I have not got to the point of installing the automation yet. However I believe I can be of help here. I bought the desired SuperFlo cable (353129z) from an ebay dealer. That dealer shows they have one in stock.

Here is a good explanation of the purpose of each wire:


There is also a good write up of how a person wires up the SuperFlo using separate relays on a Pentair Easytouch automation system:

My motor has 8 pins. The non-RS485 353129z cable also has 8 matching pins but only has the 6 wires that are mentioned in the above video. I hope Dan is correct that there are SuperFlo models that are RS485 compatible. Pentair is a strange company. You buy a motor and you don't know exactly what wiring interface the port is built on.
Last edited: Jul 1, 2021
A

I ordered the generic 8-pin M12 aviation connector cable, it arrives some time today. I probably won't get to it until this weekend, but I intend to figure out *for sure* if this pump supports RS-485 or not (and despite Pentair's front-line support telling me that it doesn't). =)
A

Everything Else Sep 10, 2021
JamesW
J
F
New Pentair Superflo VS and interface with Jandy RS

Everything Else May 19, 2021
clemengineer04
C
R
Automation