Not sure how to close:
Deck Jets
Slide

Watched some videos. Have a good idea. Already have the antifreeze. We have a compressor. Plan to pick up funnel & attach short plastic hose for filling lines with antifreeze.

Do I need polyquat?
N

Order doesn't matter for the most part. I take my equipment apart at the pad and blow each direction back to the pool. Or you can blow each line from the pool, towards the pad.

The only one that has an asterisk is the main drain. You blow that pipe until bubbles sprout from the deep end, then you close that valve while under pressure to air lock the pipe. (Like sticking your finger over a straw and then dunking it. The air keeps the water out).

Having the compressor (hopefully a beefy one) is half the battle. Do you have a plan to MacGyver a way to connect it to the plumbing ? You'll need a one-off Snoo adapter for your setup.

Polyquat has us divided mostly down the middle. Half say it's extra insurance, half say it's not needed. Neither is likely wrong. 🤷‍♂️
Reactions: Snoobug
W

You can use a quick connect with 1/4"mpt for the end of the air hose and screw it in to the drain plug hole in the wet end body.

So the guy in the video connects the compressor to the bottom part of pump via some adapter.

So when I do the main drain, all other lines are closed, is just turning the valve at the pool good enough?

What level of psi do we blow out at?

We have about 6 of these, do we need to take each lid off, blow through them and put antifreeze in? 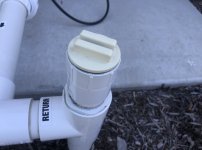 Here's the slide. Do we do anything with this? 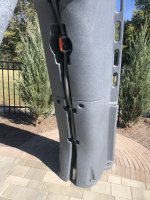 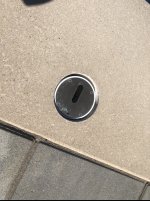 So I have had my pool for 5 years and because of this forum I have opened and closed my pool the last two years!!!! Used to spend $750 a year on open/close service. Our setups sound very similar. I closed my pool last night .

First thing I did was had a cocktail. I start draining the pool. I used the backwash, rinse and waste functions for this. Let the robot do its thing cleaning the pool. Removed ladder and railing. Turned up all the deck anchors. Had a cocktail. Had another cocktail.

Then started to clear the lines. I use the cyclone blower. IMHO this is an expensive tool but well worth the purchase for closing. Started on the suction side. I use the opening in the filter skimmer basket for this. I started with the surface skimmer after placing the gizmo in the skimmer. Cleared that and put anti-freeze down the gizmo and the plug in. Moved the valve handle to open the main drains. Forced air through until bubbles appeared and quickly closed the valve. The valve stays in the open skimmer position after this process. Then cleared the return lines. Started with the pool return side. Forced air through until clear. I capped the closest return then used the blower to clear out more water. I then put anti-freeze down the furthest return and capped it. Moved to the deck jets. Forced air through until clear. I close them one at a time from closest to furthest. I leave the furthest one open and force more air through then I put anti-freeze down that jet and cap it. I use a total of 1 gallon of anti-freeze for the whole process. After this was done I rolled out the green monster. Had a cocktail. Secured all the cover straps I leave all the equipment pad plumbing unions open. I have two on my heat pump and two on the pump side. Secured the cover and picked up. I keep all the plugs and valves from the equipment pad in the filter skimmer basket and I put all the deck jets and return hardware in the skimmer basket and store it.

If anyone reads this and sees any mistakes let me know. The process was a little foggy this morning!!!

I thought this was a great video!

Can you link to the cyclone air blower? Is it this one? 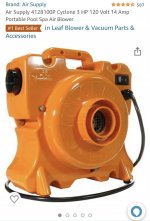 What kind of adapters will we need?
N

Snoobug said:
We have about 6 of these, do we need to take each lid off, blow through them and put antifreeze in
Click to expand...

That would work with the right adapter and you'd go though isolating the valves to blow as little of the runs as possible for each location. You would need a threaded adapter the size of the plug that reduced down to the compressor fitting. You could take a plug to a plumbing supply and they'd figure it out for you.

Snoobug said:
Can you link to the cyclone air blower? Is it this one?
Click to expand...

That's the one. Capable of only needing 1 adapter at the skimmer and powerful enough to blow the whole system. The cost sucks but it will make it so much easier year after year. Plus, unlike the compressor, it throws a geyser of water out the exits. There is NO question when you got it all.
Reactions: Snoobug and joonbug99
J

Snoobug said:
Can you link to the cyclone air blower? Is it this one?

That's the one!!! I bought this last year when I decided to close the pool. It has since paid for itself with the money I have saved in closing services. The only thig needed is the flex hose to take you from the cyclone to the line you are blowing out. I have about a 5' section attached to mine. Bought is at home depot.
Reactions: Snoobug

It'll pay for itself with just one years closing costs.
Reactions: Newdude, Snoobug and joonbug99
N

wireform said:
It'll pay for itself with just one years closing costs.
Click to expand...

It's already free from this year's opening that she did. Solo. 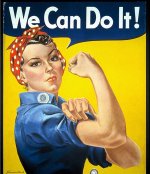 Getting Ready to Close

B
First self close - can someone please doublecheck my work?