Well I just received my first robot and used it today. What an awesome little guy!

He walks up walls, sucks up debris, and is quiet as a mouse. After he is finished (2.5 hours), you just lift him out of the pool, pull out his two sets of filters, and spray them off. Talk about easy. If I could just teach little "Flipper" to bring me an adult beverage, my life would be complete!

Just wanted to take the time to brag about our new family member and give a chance for anyone to ask questions. Now to go add him to my signature. 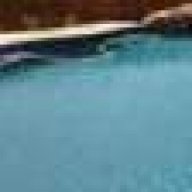 Well I am jealous, but that's the robot I have my eye on too once I get the funding . Until then I will just let my dumb Polaris keep getting stuck in the same corner.
F

He's on the top of my list...pool should be done in about a month or so. Where did you buy it from? Any buyers remorse?

I bought it from Amazon. I had a couple problems with the order. It was sold as Prime, but I did not receive it for a week. Amazon responded by giving me a month free of Prime and 1 day free delivery. The other problem I had is that the description says you get a weekly timer with the purchase. I did not receive that and no one else seems to have received it either from the comments. Since I would not use the weekly timer anyway, I did not send him back. However it may be something that you should consider.

As far as remorse, you need to think real hard about the extra monies between the Nautilus and the Nautilus plus. The differences is that the Nautilus Plus comes with top loaded filters, two year warranty, upgraded cleaning logic, and modular build. Since I have read about the robots having to have different parts replaced that end up costing as much as the robot, I went for the modular build (hopefully the drop in modules will be cheaper than the norm) and the two year warranty.
R

Flipper worked out great today. Turned him on, let him work for 2 hours, and come back to sparkling pool. He picked every leaf and pine needle out of the pool. Truly remarkable.

I believe the Z5 also carries a 3 yr warranty from Dolphin?

This Triton Dolphin Triton Plus with Caddy and Wireless Remote
Q

Dolphin Nautilus CC Plus being discontinued