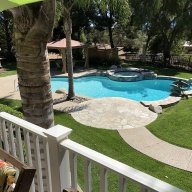 So my pool has 4 Pentair Aqualights. Three are in the pool and one in the spa. These lights have a 250 watt halogen bulb. None of the lights worked when we moved in last year. I have done a lot of electrical work in the pool pad area and the last thing on the list was the lights. So I ordered new bulbs and seals, took the lights apart and changed the bulbs and reinstalled the lights. So I turned them on for the first time last night and the pool looked great. Until the light in the spa turned off. Thirty second later it turned on again. Then one of the other lights turned off. Then a while later turned on again. All four lights were doing the same thing. But not at the same time. It was pretty random but in general it was on for 2 minutes or so then off for 15 to 30 seconds, then on. They are all on the same circuit and I use the Aqualink to operate them.

After consulting with the Electrical Systems Engineer Son in Law I got the volt meter out today to check the lights. I only hooked up one light at a time and checked voltage to see if the problem existed with only one light at a time. Well it did. Off, then on, then off, then on. Voltage was between 115 to 118 depending on if the lights was off or on. Now I Googled this to see if anyone else may have had the same issue but no luck. So now I ask the TFP forum for their thoughts. I did have a wild idea. Do these lights have thermal protection? Is the new bulb causing the lights to overheat? Any help would be appreciated.

That is strange, I had a LED pool light I got off amazon that would shut off after a couple hours and work the next day.
Have you removed one of the lights and made sure they are 100% dry? When I replaced mine I did find moisture inside

Since all the lights are on the same circuit, the problem has to be in the light fixtures or the bulbs.. I suspect that you are correct that they are going into some kind of thermal shut off.

I assume that you are not trying to run the lights out of the water...

Maybe the bulbs you installed are too high of a wattage and get too hot...

I can't think of anything else that would cause the lights to randomly go on and off at different times.

I have not removed the lights from the pool since I replaced the bulbs. I saw the warning not to operate the lights out of the water. I got the part number for the bulbs off of the light fixture. Now I know Pentair doesn’t make bulbs but could modern bulbs burn hotter than 25 year old ones

In theory a replacement bulb should work just fine.. But.. I can't see any electrical failure that would cause more than one bulb to turn on and off by themselves... I don't know for sure that the bulbs are getting too hot, but I can't think of any other logical failure that could cause the problem.

Are the new bulbs the same shape and physical size as the old bulbs??

Thanks for the response Jim. Yes the new bulbs looked the same to me as the old ones.

Pentair tech support has been helpful every time I've contacted them. Worth a try.

I have a switch on my wall that I could never figure out what it controlled, now I do. Sorry.

Automation for fountain and lights