Hi i was wondering if I would be able to repair sections of the plaster itself. there are some blistering and some cracks. Is it possible to re-plaster certain sections? The other part of the plaster looks okay except for a few parts.

Otherwise if I need to redo the entire plaster...would it hurt to leave it our in the open without water?
Just because no one uses it and trying to save money during these hard economic times.

Also if possible, where would I buy real plaster? those ez patches dont really look secure
B

I had the same issue you have. Many cracks, small and large on my steps and a very large nasty vertical crack beneath the skimmer. The pool was holding water so I know the shell wasn't compromised. While I had it drained for an acid wash, I went and picked up some EZ Patch 1 plaster repair kit and used it. Took a half day to patch all the cracks. Really easy to do. Using my dremel and a carbide wheel I roughed up and opened up the large cracks. Mixed a batch of the plaster patch and worked them in with a grout trowel. For the smaller cracks I just used the grout trowel to work the plaster into the cracks. Then before it really hardened went over it with a grout sponge to level it out.

Worked out great. Yes you can tell cracks were there but they are filled in and holding up 3 months in now. I did notice I missed a spot where the tile meet the skimmer and I went and picked up the fast set version which can be used to repair while under water. It too worked like a charm.

I wouldn't worry about the ez patch being insecure. Its real plaster and it did fill the job, just make sure you wear gloves! It really dried out and tore up my skin. 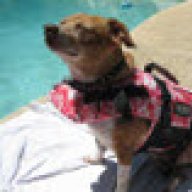 I was originally looking for EZ-Patch but my local vendor was sold out so he sold me Pool Patch, which appears to be nothing more than portland cement with some additives for underwater work. Does this stuff work just as good as EZ-Patch?
You must log in or register to reply here.
Share:
Facebook Reddit Pinterest Tumblr WhatsApp Email Link

A
Replace or repair steps

DFW Texas Recommendation for leak repair and other maintenance