I have a kubota bx coming to help with leveling the backyard, putting down topsoil, and reseeding the whole thing.

Big day tomorrow - company coming out to get everything working, chemicals in, and do the walk-through. I went to the store and picked up some liquid chlorine (10 gallons), liquid conditioner (2 gallons), and muriatic acid (2 gallons). I figure that should get me started. I did test the water and ph was above 8 and no chlorine registered.

Here is a video of everything going! 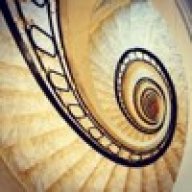 Wow - looks great! Your design is very elegant. Love the raised spa. Fingers crossed that the forecast for the weekend holds or improves - looks great right now for swimming!

Anyone know how much muriatic acid I should expect to put in on startup? I'm about a gallon and 1/2 into it and the color isn't changing at all - still 8.0+. I've been adding 1/2 bottle and waiting 30 minutes with filter running before testing again.

Turn on both of your pumps and test/add every 15 mins until you see it move down. It could be higher than you think.

Good luck and be careful with that yucky stuff! Don't get in a hurry!

So far, I'm 3 gallons in. Chlorine is at 6 after adding 2.5 gallons this morning.

Where is your PH now?

Thanks for checking up on me - I overshot it and am at 7.0 as of this afternoon. I'm guessing with the new plaster and water features, I'll be in the zone in no time. The 3rd gallon did it.

And, I didn't test TA. I think I'm getting it dialed in. Am I missing anything?

You are getting it! I bet you have the testing down now..........can you do it with out having to read the directions yet?

Keep an eye on the PH..........it will push up for as long as a year with new plaster. Some go faster but I want you to be ready if it does go longer.

Nope - can't do it without reading the directions yet. The PH I can, but that's an easy one. The chlorine throws me with the two different methods - 10&25 mL.

Will definitely keep an eye on the ph. I went overboard and pick up 6 bottles of muriatic acid at the pool store yesterday so I am ready to do battle!

You will go through it over time. It does not go bad. Just make sure you are storing it in a VERY well ventilated area away from metal and the chlorine. I keep mine outside behind the barn/garage.

Oh - I didn't know that about storing it. It's in my garage in a box right now. I will love it outside and try to find a place away from everything to store it.

Your liable to go through 6 gallons before you know it. That's a lot of pool and depending on your fill TA, demand up front may be high. No worries, but I mostly wanted to say its a lovely pool and great build to review. Very nice.

Thanks! We are happy with the way it turned out. It wasn't the smoothest ride and there was a lot of apprehension and worry along the way, but it turned out really nice.


Patrick_B said:
Your liable to go through 6 gallons before you know it. That's a lot of pool and depending on your fill TA, demand up front may be high. No worries, but I mostly wanted to say its a lovely pool and great build to review. Very nice.

Yep, you'll not have to worry about using that up. It keeps if you don't hot, cold no matter. 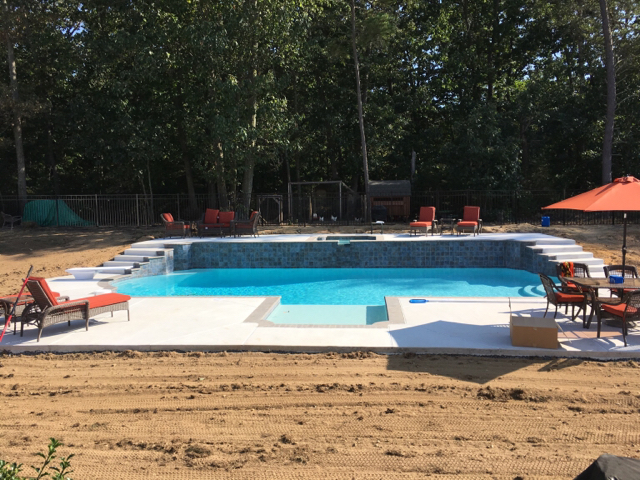 Getting everything dialed in! Ph jumps up daily, but I find myself adding less and less. Chlorine is holding and not having to add a bunch at a time. TA was at 50 today so I'm off to BZj's for some baking soda. Ch was 200.

Nice to see that pretty water! I love how you have it dialed in!

Once the plaster cures (6months to a year) You will find the TA your pool likes to be at.........the PH will be stable for long periods of time.

Keep your CSI in mind when working your levels. We want that pretty plaster to last a long time!

I really like that picture. It shows off the steps leading up the the hot tub level. The contrast between the two colors look so neat!

GREAT picture of your pool! Looks like a resort . . . Nice work!

So, I as going back through my posts from last year when the pool was getting built. It is interesting to see how everything went almost a year later. We are opening the pool on April 29th, so I was doing some research on what I needed to do to get up and running quickly. The pool was finished in the middle of September, so we ended up getting about a month of use out of it. They (we) didn't end up putting the salt in or starting up the saltwater generator. I just used the liquid chlorine for the 6 weeks or so.

Anyway, this first Winter, we decided to go with a temporary cover. It was somewhat of a nightmare, especially with our raised edge. The top kept sliding in. The wind would get under it and wreck all kinds of havoc. It got holes in it and the leaves would weigh it down enough where it would fill with water. I'd pump the water off and then have to refill the pool to get the water back up on top of the tanning ledge. Towards the end I just pumped from the top of the cover back into the pool and brushed the leaves off.

In the end, we decided to go with the safety cover next year. Ended up costing $4600, but the local pool company is going to do the closing for nothing and install the cover at that time. They charged me $750 (including the temporary cover) to close it in the Winter and I don't see getting more than this season out of the temporary cover. So, in about 8 years the cover will pay for itself financially, but its already paid for in aggravation avoidance.
You must log in or register to reply here.
Share:
Facebook Reddit Pinterest Tumblr WhatsApp Email Link