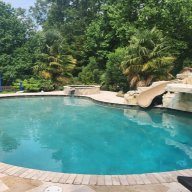 I had a little bit of black algae on the bottom of my pool. Water looked clear and fine. I asked my pool guy about it and he came over and added 12 lbs. of shock and 2 bottles of Yellow Quell. I woke up this morning and my water is murky and green!! What did my pool guy do and what can I do to fix it without calling him back out. I should have taken care of it myself from the start but have been so busy at work.

Note: This is a different pool than I have listed on my account. It is a 28,000 gal pool, gunite.

I will test the pool when I get home and try to post some numbers.

Yellow Quell is sodium bromide. Your pool guy converted your pool from a chlorine pool to a bromine pool.

You have about a 13 ppm bromide bank in your pool now, so it is very much a bromine pool now. Only way to correct that is to drain almost the entirety of the water.
Reactions: Texas Splash

Donldson said:
Yellow Quell is sodium bromide. Your pool guy converted your pool from a chlorine pool to a bromine pool.

You have about a 13 ppm bromide bank in your pool now, so it is very much a bromine pool now. Only way to correct that is to drain almost the entirety of the water.
Click to expand...

I'm going to be really (excuse the language) ****** the f?!x off. I can and usually take care of my pool but thought he should know what he's doing since I just have been so busy. Draining pool entirely could damage it right? I have an SWG, btw... Not sure if that helps at all.

This is what it looks like now. It was clear water last night.

Thanks JD for catching that.

The pool doesn't look all that bad from the pic you posted. Still, I think @Donldson can confirm your next step if there is anything other than a healthy water exchange to follow.

Doesn't look terrible I guess. Just not what I'm used to. I'm used to clear water and can see the bottom of my pool just fine. It's just not the way it's supposed to be or what I want (obviously). So is really the only fix draining my pool? Water trucks aren't cheap!

Having an SWG makes it worse, actually. Since bromine is not protected from sunlight by CYA it burns off quickly and the SWG will have to work much harder to maintain the Br level. That would shorten the life of your cell significantly compared to running chlorine and CYA at the levels recommended here. If you want to try operating without draining you can, your operational level will be 2-5 ppm Br and your SLAM level will be 20 ppm Br. For the FAS-DPD test at 25 ml each drop is roughly 0.5 ppm Br.

I would strongly suggest draining though. There are risks to draining if your water table is high, but if it can be done quickly it is the most efficient way to go about it. To lower your bromide level down to under 1 ppm you need to drain at least 92% of your water. That's not easy to do incrementally, it would take four 50% drains, or nine 25% drains. So doing it all in one go is the best way. But no, there is no other way to remove the bromide. Which is one of the many many reasons I consider it the worst thing to add to a pool.
Reactions: Texas Splash

Man, I hate to hear that. So draining my pool putting fresh water in it, getting it back to the correct levels, is that really the best option I have? I do not want to have a bromine pool and I definitely don't want to ruin the life of my SWG. Can you explain to me what exactly happened? Adding 2 bottles of that stuff really f'ed it up that bad? I can't believe he would even do that to my pool. Not happy!!

Sodium Bromide is what is added to a bromine pool to create a bromide bank. When chlorine is added it reacts with the bromide to create bromine. Once the bromine is consumed (reacts with a contaminate, algae, or is destroyed by UV light) it reverts back to bromide. The process then repeats.

As bromine is unaffected by CYA some professionals would use it in a pool with a CYA problem so the chlorine would seem to be effective at normal levels. This technically works, but fixing the CYA problem or running higher FC would be better options for that. Somehow this practice morphed in to companies selling the stuff as algaecide and the chemical sales people convincing service members that it can be used to fix algae problems. First thing is first: bromide is NOT an algaecide, no matter what the bottle says. The presence of bromide in water does not bother algae one bit.

So what did the bottles of that stuff do? Like I said, 64 ounces of sodium bromide in 28,000 gallons of water will create a bromide bank of about 13 ppm. So every time you add chlorine most of it will be converted to bromine almost instantly. Once the bank is saturated the rest of the chlorine will remain chlorine, but as the sunlight burns off the bromine it will revert to bromide which will then react with any chlorine. That's why even a little bromide in a pool can be a problem and why almost all of it has to be removed. We have seen cases where as little as 1 ppm bromide has caused major chlorine demand. My guess is the water is green because your water was well balanced with CYA to prevent loss to sunlight, once the bromide was added it lost that protection and the bromine burnt off quickly and the algae was free to grow.

Why did he do it? Because he thought it would help. Why did he think it would help? Because he doesn't know much about pool water chemistry. There's no qualifications to call yourself a "pool guy", after all. Actually knowing and understanding what you are adding to the water and why you are adding it is a rare trait in the industry, sadly.
Reactions: gonfishin and Texas Splash

So because I was so mad, I contacted the "pool guy". He said before he drained the pool that he would add a neutralizer. He said the reason it looks like that is that the pH is a little off. He said the only way to get rid of the black algae was to shock it heavily and add the Yellow Quell. He said he's going to come by with "his" test kit (I'm sure it's not a TF-100) and that we'll go from there. Again, it's not pond green water and it's a tad murky.

Take a pic and record every chemical your pool guy adds to your water. You need to know if you need to step in and fix the mess he created. You are potentially going to end up with a chemistry stew in your pool water.

You have to do what you think is right for you. If he thinks pH is the only problem he's further illustrating his ignorance. If it were me I'd get rid of him and do it the TFP way. You are better off just getting a laborer to do what you tell him to do based on advice from here than to get a person that thinks he knows and he doesn't know what he doesn't know. Most likely he's just doing what a pool store that sells the chemicals is telling him to do.

Sorry you're in this terrible situation and I wish we had a better option. If you find a way to get help so it doesn't take all your time the consolation is you can then take care of your pool with little effort yourself or with a laborer that just does what you tell him to. Most of the time that's just do the tests, scrub the pool and add acid every now and the Not perfect but better than the other choices that are essentially a Crud-shoot.