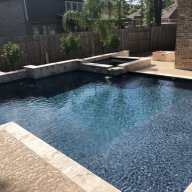 I have a 2.5 year old A&S pool. During the build I wanted a plaster or surface that was darker for a deeper blue color. They talked me out of it (before I really knew about pool chemistry) telling me that if I shock a pool that has a darker surface I run the risk of having white blotches in the surface due to the shock settling on the floor (that and a darker color would keep the pool warmer...turns out I prefer warmer water anyway)!! So that scared me to stay with the standard white. 2.5 years later and I have never once had to shock my pool. I use Bleach, Baking soda and Muriatic acid only. Pool has always stayed swimmable.

Well, after 2.5 years, the white plaster kinda has a tinge of brown color to it due to, I assume, staining. Brushing and higher chlorine count doesn't improve it. So I was thinking of draining pool and acid washing surface to clean it up to make white again, but then wondered how much it costs to resurface and put in a Radiant Fusion surface for better looks. I know it will be at least 5K or more....but willing to pay the price as I have never been truly happy with the white generic plaster. Has anyone in Houston area resurfaced pool and can recommend a good company?

You might want to check your pool surface for staining. Read Stains in Your Pool - Trouble Free Pool

2.5 years is really early for a replaster. And you can put new plaster over one old coat. But on a third round you usually need to do a complete chip out.

There is some truth that darker plaster surfaces often have motteling for a variety of reasons. You see many complaints about it here.
Last edited: Apr 27, 2019

Nobody in Houston on here that's done a resurfacing?

Ok, well since nobody was able to help, maybe I can help the next person in Houston looking for a replaster job. I got 3 bids on resurfacing.

First one from Anthony and Sylvan (I had a great experience with them building the pool and would not hesitate to use them again) who now does remodel work and built my pool 2.5 years ago. They wanted 9100 dollars to re-do my pool with WetEdge brand and their Indigo color (excellent color). Add another 700 dollars for Abilone added in for sparkle. This job is done right over the top of the current plaster. No start up or initial care included.

Second was from Express Pool Plastering and they use Stonescapes and Radiant Fusion. Their bid was around 7000 - 9000 dollars for stonescapes. The higher end of the bid was for the nicer colors I liked. They also just go over the top of current plaster. No start up or initial care included.

Third bid was from Total Pool Care. They strictly use PebbleTec. And the bid they offered me was for Pebblesheen Level 1 and it came to 11,100 dollars (add in another 700 for abilone) which included a total chip out removal of old plaster and 3 weeks of start up control where they come brush the pool twice a day and take care of the water chemistry to cure to plaster. I liked the idea of the total chip out along with the pebbletec guranteee. So I opted to go this route. Only one issue: I wasn't too keen on the deep blue colors the PebbleSheen offers and then I saw the PebbleBrilliance level in Deep Cove color. WOW! What a difference in color and texture and appearance. Obviously this would be way more expensive but I wanted to know what it would cost. Well, with the chip out and start up it would be 18,300!!!! OUCH!! But, I opted for this because at the end of the day I want what I want and I don't want to get "close" to what I want because I'll just be upset later at spending almost 12K for PebbleSheen but not really satisfied with the color. So PebbleBrilliance is what it's going to be at a heftier price.

Hopefully this info will help anyone in the same position I'm in. If you're going to build the pool, get what you want out of the gate...don't pay for something twice like me because you wanted to save up front. 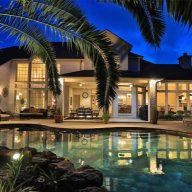 Thanks for the thread and write-up. I'm in Houston and we just bought a home with a 15 year old pool in need of re-plaster. I'm really liking the Pebble Tec, and the pool was dark before (which still looks good even if it is blotchy) so I really want to see those before and after pics.
Reactions: NVaughn

Ok, so the project is done. And what a difference. The PebbleBrilliance is absolutely amazing looking and the pool is filling up as I type this. I will say this, a full chip out and replaster is not for faint of heart. They will absolutely destroy your pool in the process. Your pool will look like an abandoned pool from the city of Chernobyl. Once the Pebble Brilliance was in all my concerns went away and I was kicking myself for not doing it when the pool was being built. Here's some before's, during's and now as the pool is being filled:

MMG Modern Method Gunite is a great company and they offer a lifetime warranty and a one time warranty transfer. They backup their work too - if you are in the Houston area, I'd call them if anyone else wants a replaster...

on the pic after the spa where it's been redone, the pool looks like you can see a distinct line w the new plaster/pebbles...is that gone or was it just a "picture thing"? Looks good and good luck- post when it's full of water - also, keep your pH low to spec

tstex: Must be a picture thing because I don't know what you're referencing and there were no lines in the pool before the fill. That pic was right after the acid wash. It was Modern Methods who did the Pebble Brilliance...they were contracted out by Total Pool Care. It's a completely different pool now from before. I love it.

Does a heat pump work in the San Diego area?