How to Remove Waterline Scale in a Pool

Tile cleaning is a tricky process and you absolutely need the person doing it to have experience. One member had his tile cleaned twice, both times with kierserite media (magnesium sulfate).

The second guy was not nearly as careful as the first and, after the fact, the member determined that he had used WAAAY too much kierserite media while blasting. There's definitely a technique and an art to it, so you need to be careful.[1]

Calcium scale is predominantly calcium carbonate which, once formed, does not redissolve easily at normal pool pH. It has a Mohs hardness of about 3. It can only be attacked by acids.

Kierserite media is basically magnesium sulfate (MgSO4). It has a Mohs hardness that is slightly greater than calcium carbonate with a value around 3.5. It is also a frangible material when it is coarse grained - that is, it fractures, or "explodes", on impact. That second property is very useful when blasting scale because the shattering of the kierserite helps to cause greater impact stresses on the scale which then causes the scale to pop off rather than just wearing away the scale. It does dissolve in water slowly. 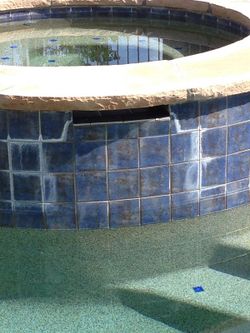 Before Tile With Scale 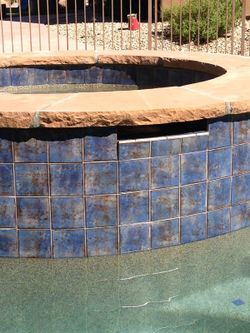 Glass beads are, as you might guess, silica glass in a rounded bead shape with a known particle size. Glass is a lot harder than calcium carbonate scale and has a Mohs hardness of between 6-7. It is not frangible and it does not dissolve in water.

Baking soda, sodium bicarbonate, is much softer than calcium carbonate with a Mohs hardness of about 2.5. It is typically used to remove paint from soft metal surfaces, like aluminum, without scratching the metal. It is far too soft to remove calcium scale and it will readily and quickly dissolve in water.

More importantly is what the surface material is made out of. Pool tile is typically glazed ceramic OR porcelain tile. Tile glaze has a Mohs hardness around 6. The glazing material itself is inert to pool water and most strong acids or bases. Tile grout is typically a cementious mixture with a fairly low hardness, typically on par with gypsum but not much more than calcium carbonate.

In general with any kind of blasting work, you want to match the blasting media so that it is as hard or harder than the material you want to remove but not so hard that it damages the underlying substrate. As you can see from above, the kierserite and glass beads will satisfy the first criteria BUT the glass beads can also cut into the tile glaze. Soda blasting is inadequate for scale removal. The downside to kierserite is that it does dissolve slowly in water and so, if you are not vacuuming it out of the pool, it will raise your sulfate levels. If your pool tends to have high CH you could experience calcium sulfate scale formation when the SWG chlorinator runs (it looks like snowflakes shooting out of the returns). Sulfates are known to degrade the metal coating on SWG plates over time and can damage plaster via "sulfate attack" and so you want to keep the total sulfate load below 300ppm. So that means the blasting should not use more than 31lbs of media per 10,000 gallons of pool water.

This is where experience, proper tools and careful planning are required on the part of the person you hire to do the job. If they use kierserite, they absolutely need to keep the amount of material used well under control so as to not foul up your pool water. The operator should adjust the nozzle pressure and air flow to keep usage rates down. If they do exceed the 30lbs/10,000gal limit (which my second guy did by quite a lot...), then you'll need to drain and refill to compensate. Normally one drains the pool down to the bottom of the tile line anyway, but that's going to be less than 1,000 gallons of water in a lot of pools.

They also need to vacuum and remove the spent kierserite from the bottom of the pool as they go and not at the end (having a second man on that job helps). Sometimes these guys will do a quick job on the weekend, spend an hour or so cleaning your tile and then try to get the homeowner to do the cleanup work; vacuuming spent media as well as your deck and pool area cleanup should be part of the job.

If they use glass beads, then they MUST BE SUPER CAREFUL with air pressure, air flow and spray pattern as they can easily damage tile glaze and grout. Glass media has to be vacuumed out as well and not vacuumed INTO your filter. If you have a cartridge filter, vacuuming through your filter with glass media could damage the filter components.

The tile cleaner should, if they are competent, have a separate pool pump setup on wheels that lets them vacuum to waste. The first guy the memebr hired had all the right equipment and he had a small 1/2HP single speed pool pump with a small cartridge filter on a cart. He had it plumbed with his own makeshift valve that let him pump through the filter to directly out to waste. The second guy had something similar but it was more of a trash-pump that he had little control over and no filter. So he wasted a lot of pool water and did a really crummy job cleaning out the waste.

Should You Use a Tile Sealant?

Here's the dirty secret on "tile sealants" - they are used more to cover up a shoddy job than to protect your tile. Sealants are useless and you can still get scale on the sealant. Cheap ones will yellow over time from UV and chlorine exposure. When they are first applied, they make your tile shine like new (and that's how they hide scratches) but, over time, they turn dull. We suggest not bother with it and, if you do hire someone, explicitly tell them you only want a water rinse, no sealants.

One other option you could do yourself, but it's labor/time intensive, would be to see if you can dissolve the scale away using a product called Biodex-300 Scale Remover. It's a mixture of hydrochloric, phosphoric and hydrofluoric acid. It is very dangerous to use and you DO NOT want to get it on your skin! It's a thick, viscous liquid, about the same viscosity as corn syrup, and you apply it in small areas and let it sit. The acids dissolve the scale but not the tile glaze. After the bulk of the scale is dissolved, you could then go over the area lightly with a pumice stone to remove any fine scale.

The BioDex tile cleaner has a small amount of HF in it. Hydrofluoric acid (HF) is EXTREMELY dangerous to work with. Unlike most strong acids it will not burn your skin but gets rapidly absorbed where it then gets into the underlying tissue and destroys it. It causes severe bone damage and, if more than 1 square inch patch of skin is exposed to concentrated HF, a person will shortly experience cardiac arrest and death. The toxicity of HF is due to its powerful ability to sequester large amounts of calcium out of human tissues, bones and blood. Calcium is critical to the heart for proper rhythm and is why HF can disrupt a heart. HF exposure is typically treated with calcium gluconate gel and calcium gluconate injections. However, if exposure is high enough, no treatment will effectively save a person.[2]

Pumice stone can scratch certain tile finishes. We do not recommend using it on glass tile. It can also leave a slight hazy/scuffed look to high gloss tile glaze. Pumice stone is fine to use on the grout lines. Pumice is also better suited for spot cleaning; if the pool tile has significant calcium buildup all along the perimeter line, manually scrubbing the tile with pumice will take forever and will likely be quite uneven. Using a pneumatic grit blasting process is fast, convenient and can leave tile looking brand new.[3]