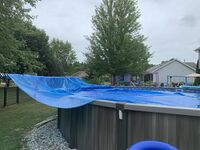 Solar Cover over an Above Ground Pool