There's a small rust spot on the wall of my inground vinyl pool. The pool was installed last year. The screws holding one of the returns to the wall are rusting on one of the returns, on the other end of the pool. I can feel what may be a screw head behind the rust spot, but I don't see that there's a tear, and the pool doesn't seem to be leaking... Searching the site, I don't see anyone with a similar problem. I'm going to contact my builder (they have a couple other things to fix for me anyway), but thought I'd check here first. I need to find a Vitamin C tab and see if the rust spot goes away, but I'm sort of afraid of finding a tear under the rust and starting the leaking process.... Any ideas?

What my husband did was sand it lightly then put some bondo over the spot and about 3" around it to extra safety.
N

So the vinyl below the return has a rust spot, and you can feel something behind the liner ? Or the rusted screw in the return is making a drip like rust spot ?
J

They mixed up the screws when installing the return face plates. Should be stainless screws. I have seen some of the cheaper styles have some rust as the quality of stainless is poor. Let the builder take care of it. If you strip it its a project to get out with water in the pool
L

Sorry, my post was confusing. I have two rust issues. First, the screws that hold on one of the returns must have been the wrong screws, as jimmythegreek suggests, because they're rusting. I told my building a month or more ago, but they haven't come out. They also said they'd replace the cover on my fastlane, and there's other stuff, so I'm waiting on a couple things from them.

But then the second rust problem is on the other end of the pool from the first rust issue. (This is a completely separate issue, probably---it could hardly be further away from the overtly rusting screws.) It's just an innocent looking spot of rust on the vinyl, about halfway down the wall. When I touch the spot, I can feel a lump behind it, which I suspect is a screw. But why would the vinyl be rusting if the screw is behind it? I want to try the Vitamin C trick, but I'm kind of afraid I'll expose a leak---that is, I'm afraid the screw has rusted through the vinyl somehow. Right now I don't seem to have a leak. I need to ping my builder again and get them to look at it, but I thought I'd check to see whether anyone here knows what this could be!
J

Take a pic of the spot. There shouldn't be a screw back there or a rust spot in front either
L

OK, I wasn't able to get a shot from in the water, but the spot isn't too far from the surface. I did zoom these in. The spot is right in the middle of this photo.

Interestingly, the spot was rounded when I first looked at it. I took a picture of it before I touched it:

When I touched it, the "head" came off. It broke into a couple pieces and sunk to the bottom. Here's what's left, just a flat rust-looking stain. Again, the spot is right in the middle.

I called the builder yesterday and the service person was supposed to call me but hasn't yet.
Last edited: Jun 11, 2020
L

In case you’d like context, I put a little highlight to show where the spot is. It’s by the middle raft on the left side of the pool.

Looks like a void there. What's it feel like now with your finger run over it
L

It doesn't feel like much. There's a bump under it, like maybe there's a screw? I can't feel a tear in the vinyl though. The service folks are coming out tomorrow --- I texted them the photos above, too, and they're going to look at it. Pretty unhappy if I already have a rip in the vinyl! Especially in such a weird place. 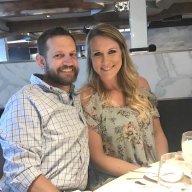 Lazygirl1978, what color is your liner??

lazygirl1978 said:
In case you’d like context, I put a little highlight to show where the spot is. It’s by the middle raft on the left side of the pool. View attachment 146005
Click to expand...

It's reef pattern with no border. We love the color! I might look for a border i like when it's time to replace it. The reef pattern repeats, and the repeat is super obvious at the waterline! Otherwise, I love it.

So the pool folks came. The tech had no idea what the spot was. None. He sent the pictures to his supervisor, but that was Friday and I haven't heard back (today is Wednesday).

To make matters weirder, the spot is kind of...gone. I went out friday night to take some crushed vitamin C to it, and I couldn't really even find it! I felt in the area it had been, and it felt like a tear in the vinyl. A tiny one, just a knick. I checked again over the weekend, and I can't even find the tear now. I feel like I'm losing my mind. I don't seem to have a leak (and I tried the food coloring test with no visible movement toward the spot, but maybe I should buy the real dye for leak detection). And I no longer feel a bump under the spot. I'll keep updating in case I figure out the answer. I really think I had a tiny hole in the vinyl, and it seemed like some metal under it was corroding...

I used a needle-less syringe with food dye in it for my leak detection. Did you look with googles or a swim mask on?

kimkats said:
I used a needle-less syringe with food dye in it for my leak detection. Did you look with googles or a swim mask on?

Oh a syringe is a good idea. I use goggles -- don't have a swim mask, but that's probably a good idea! Part of me wants to cover up the area with one of my patches just in case -- it can't hurt, right?