Tested my fill water:
Anything special I need to be thinking about here? The TA seems quite high. I ran the test twice in case I screwed something up, but it came up 29 drops both times. PH is of course high to match. It was almost an exact copy of the 8.2 color block.

At least I know the water will be immediately counteracting the initial acid wash!
K

Merged threads. TFP Mod.
Hi everyone. Should be getting plaster this week, so decided it was a good time to test my fill water.
I ran the TA test twice, as I thought I might have messed something up. But nope, looks like I got some very basic water going on here. Anything I should be concerned about or any extra steps I should be looking at? Theoretically I do have 30 days startup service from the pool builder, but I also attempt to verify and validate everything I can.
Last edited by a moderator: Sep 8, 2021

For now, no worries. But if that's a new test kit, be sure wipe the drops of the R-009 with a damp cloth between drops the first few times as some static electricity can influence the size of the drops. Also be sure to not rush the drops, but let them drop in full sizes. See if that influences your reading.
K

Texas Splash said:
For now, no worries. But if that's a new test kit, be sure wipe the drops of the R-009 with a damp cloth between drops the first few times as some static electricity can influence the size of the drops. Also be sure to not rush the drops, but let them drop in full sizes. See if that influences your reading.
Click to expand...

It is new. I did wipe with a damp paper towel between each drop, as instructed. I did wonder about why, thanks for the explanation! Was tempted not to the second time around, as counting out 29 drops with the wipe in between was a bit arduous. Now since I know it's for static purposes, I'll be sure to use a cloth the next time rather than paper towel.

Most of the reagents I could just tip them and the drop would handle itself. This bottle for whatever reason I have to give some slight pressure to get drops moving.

KCNM said:
Most of the reagents I could just tip them and the drop would handle itself. This bottle for whatever reason I have to give some slight pressure to get drops moving.
Click to expand...

A little squeezing pressure is not unreasonable, but if you have to apply significant force to squeeze it, perhaps the tip is bad. Let us know after your next 2-3 tests if it has not improved.
K

Texas Splash said:
A little squeezing pressure is not unreasonable, but if you have to apply significant force to squeeze it, perhaps the tip is bad. Let us know after your next 2-3 tests if it has not improved.
Click to expand...

I will attempt to retest tonight.
K

Pool surface prep guys revisited today. As expected, neither spot was expected to be a problem, but he was happy to do something as long as it made me feel better

. He definitely gets an A+ for customer service!

I did have him throw some patch on the stair weep, as especially after rain it output a lot of water. And it was a depression in the surface anyway, so no harm done. The other we just left alone, as it's not even damp to the touch. The only way I even know there's water is just because the bond coat darkens so strongly with water. And I didn't feel like building up the bump that's there even higher just to make me feel better.
K

Retested TA this morning at 200 and 220 for two tests. I did a few things different:

So last week got news that the Blue Surf we had selected would not be available, and additionally the available colors were strictly limited: Aqua White, Aqua Blue, Blue Granite, White Diamond, and then two custom mixes "Alpine Blue" and "St Thomas Blue".

So we had decided over the weekend on Blue Granite, using the cost differential to bling it out with glass beads.

However, project manager texted me yesterday and verbally confirmed today that, somehow, the plasterers have managed to get enough material to do my comparatively small pool with the original Blue Surf. So we're back on for this week, weather permitting.

Well no plaster today. Apparently I was job 2/3. First truck of the crew showed up around 12:30, looked at the pool, declared there was too much water, and left. The small pump they left me died a couple weeks ago, and I told my project manager that and also that the water was high. It's an inch or two deep in the shallow, which means 3' or so in the deep. So this sucks because I don't really think there's anything I could have done any differently.

Apparently my project manager got chewed out pretty thoroughly about it. Told me he should have been there to make sure everything went through. And the plasterer's Saturday is already booked, so now we've got to be reslotted into next week's schedule.

Personally, I don't think there any way they were getting through my pool and to another one unless everything was picture perfect when they show up. And they just used the water as an excuse to get to the next one. Unsure what the expectations were between PB and the plasterers, though.
Reactions: BigPapaSmurf

PB brought out a new pump and slotted it in the raised pot. It was not enough. Water was flowing around the pump and out of the pot. Made a pretty fountain, but apparently not the effect they were going for. So now they replaced all that with this *fancy* setup: 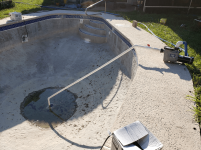 That pump is more powerful than the one for my pool! I just have to make sure it's still pulling water every once in while. That ball valve is choked to almost completely closed, just to keep the pump from making a hole under my pool by pumping up all the sand.

After entirely too much excitement, we have achieved... Blue Smurf!

It definitely looks bluer to my eyes than what I see on this screen right now. 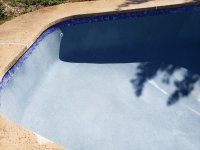 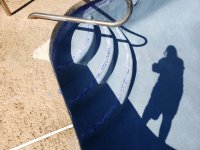 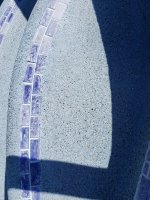 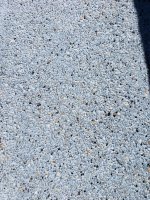 I'm happy that the plasterers were scheduled for today and not yesterday. Our rear neighbors decided they no longer liked their two large trees, and leaves and twigs were going everywhere. They might have had to call it off again.

Acid wash is done, and we are filling! Pictures turned out much closer to my eye today on the blue level. 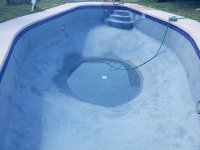 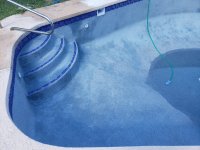 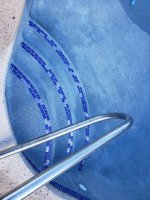 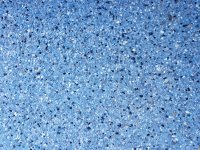 Last item on the contract is moving the lighting junction boxes. Electrician should be able to make it out next week to knock that out.
Reactions: KBR, TampaKathy and BigPapaSmurf
K

I also forgot to mention yesterday that it was a bit of a good laugh to see the last plasterer in the pool. Since they work shallow to deep, he ended up in the direct middle of the pool. He eventually just decided to walk back to the closest edge and patched in behind himself.
K

Pool is filled! This is right after filling, so while we are loving this saturated turquoise color we're anticipating it will shift more blue once the chemicals are balanced. 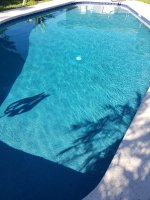 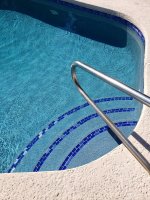 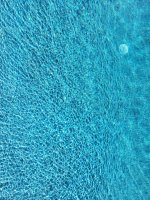 It's in my signature right now, but for posterity, this is PebbleSheen Blue Surf with Luv Riviera tile -- RIV-BR51 on the waterline and RIV-1251 on the stairs.
Reactions: KBR, kimdurg and BigPapaSmurf
K

Post fill water testing:
Start up guy is supposed to come out this afternoon.
K

So the system is sucking in air at some point. The pump was retained and not new, so I replaced the o-ring and lube on the gasket. That had zero effect, so it must be somewhere else. It's not the skimmer. PB is supposed to come out and take a look. Also the electrician to finish the lights is supposed to come out this week still.

Chemicals are getting to balanced. Pool guy came out Saturday and did acid and calcium. Then came back yesterday (Monday) to do more acid and calcium, and also start building up CYA and chlorine. From what I can tell, they're basically shooting to just balance the water, so a traditional startup.

Here's where I was this morning:
Going to buy and add more calcium this afternoon. As far as I can tell, it's been positive CSI since it was filled, so I consider that a good thing for the curing.
K

Here's some with the chemicals balanced, during a cloudy day: 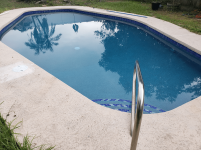 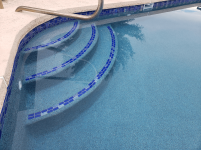 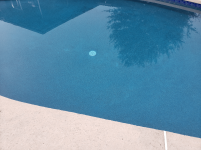 And here's a sunny day: 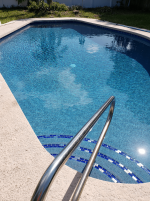 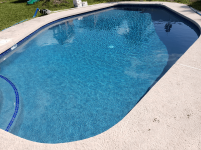 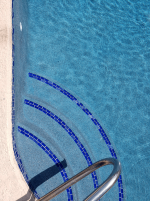 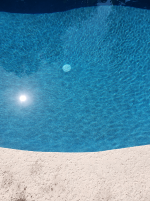 I've discovered that if I don't include part of the deck and only get the pool, the color balance gets thrown off.
Reactions: Newdude, KBR and BigPapaSmurf
K

Still adding small doses of acid every day, as expected. Here's the readings before this morning's daily dose:
Apparently 140 is my pool's TA happy place for right now. We'll see if that changes once the plaster completely cures. It was only put in last Wednesday, so there's still a lot of stuff going on there I'm sure. Calcium has been stable now. I added about 2#, and got pretty much exactly the 25 increase that I expected.

K
Getting Ready to Resurface

Light not flush after plaster

Under Construction Friday at 11:23 PM
tonytx05