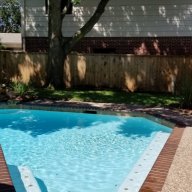 My Polaris 9550 sport has not worked properly for about 9 months now. It starts a cleaning cycle ok, but after one or two times of climbing the wall, reversing down, and turning to start another forward swath, it stalls out for about 5 seconds, then starts driving backwards until it goes up the wall and flips over, landing on its top. After about 30 seconds upside down, it rights itself, then maybe operates correctly for a pass or two, but then inevitably stalls out after turning and drives in reverse again. The robot can still clean when it drives forward, but when it goes in reverse, it does not clean anything and just wears the gears down and makes the cleaning cycle very prolonged and inefficient. I am pretty disappointed as this is my second major issue with the 9550 since I first purchased it 3 years ago. Because Zodiac had sent me a replacement unit due to the first major issue 2 years ago, I have an old 9550 full of spare parts. So, here is my systematic approach to troubleshooting this unwarranted and unwanted reversing issue, one thing at a time:

I am at a loss! What else could it be? I thought that the issue was related to some kind of mixed signal the unit was getting where the unit thought it had been climbing a wall and was putting itself in reverse to come down the wall or that it was getting a false signal from the remote control telling it to move backwards. In either of those cases, I thought that swapping the circuit board, cable, and control module would have corrected it...but nope. Any ideas of what it could be and what else to try?

A couple of suggestions, not sure any will really address the issue:

1. For the upside down issue, I've seen a couple of units where even though you clean out the basket, there remains a film of stuff blocking the mesh. I've been able to solve those just by gently scrubbing the mesh with a brush and soap solution. For some reason the film causes some extra buoyancy.

2. If you disassembled the unit, did you insure you got the Styrofoam pieces back into the proper position?

3. I see you disassembled the motor drive unit to replace the control board. So, I'm guessing you have a full set of drive motors as well:

- Did you by any chance switch the connections for the left and right drive motors? Can't remember if the leads are long enough to do that but that could cause weird issues.

- When you reassemble the drive assembly, you have to take real care to insure that all the seals are lined up correctly and will not leak. Once a leak occurs, the motor controller board, even though it has come conformal sealant around it will short out and fail quickly. Just be careful.

Anyhow, just ignore anything that does not apply to your situation. I have fixed a number of these devices and have not seen this specific problem before.

If you end up giving up, shoot me a PM, I'm in need of some salvage parts for another 9550 and would be happy to purchase them from you.

Hey Pilotbob3! Thanks for replying. To answer:

1. The upside down issue occurs when the robot starts ascending a pool wall in reverse. Because there is no suction when the robot goes in the reverse direction, it flips over. However, I will still try giving the basket an extra cleaning and even swapping it out with another basket I have on hand.
2. Yes, I ensured all the styrofoam pieces were in their proper place and orientation while re-assembling.
3. I do have a partial backup set of motors from the first Polaris that Zodiac made good on the warranty claim for. You will see from my image with the two motor sets one above the other, the top one is the old motor set from the first Polaris and if you look closely, you can see how the left drive motor is burned up (you can see the brown corrosion closes to the circuit board). The bottom one in the picture is the one I am currently using which has the reverse drive issue.
- I did not switch the connectors for the left and right drive motors; both were connected to the correct terminal.
- I did not replace any of the motors, but, I am interested in doing so! The thing is, I don't know how to do it. The large nut on the propeller motor is extremely tough to turn and I am not sure how to remove it. Is there a YouTube video you can point me to that shows how to remove & replace either the wheel motors or propeller motor?
- I was very careful to ensure the seal gasket was properly in place while re-assembling.
4. What I meant to convey was: The unit going in reverse is causing extra (and needless) "wear-and-tear" on the unit. Assuming my unit operates properly only 33% of the time means I need to run three cleaning cycles to match what it should be doing in one. Gears (and motors) are suffering from this extra wear-and-tear.

Very sorry I missed your posting. If you are still listening, the large nut on the propeller driven motor assembly just comes off with a big enough crescent wrench. You might need a drop of penetrating oil, but mine came off after a bit of persuasion. The wheel motors just have one locking nut on the exterior of the housing and also come off with a crescent wrench. If you need more advice, feel free to PM me.
B

Im having the same issue with my 9550 Sport. Did you end up fixing this?

Im having the same issue with my 9550 Sport. Did you end up fixing this?
Click to expand...

No. Still dealing with it. When this unit dies, I'll probably go with another brand.
You must log in or register to reply here.
Thread Status
Hello , This is an inactive thread. Any new postings here are unlikely to be seen or responded to by other members. You will get much more visibility by Starting A New Thread