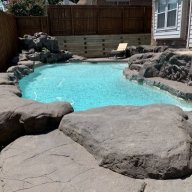 Looking for some thoughts on how my pool was plumbed. We have a leak that I’m fairly certain is on the return side. The pool was constructed in the early 90’s and I have no idea where they plumbed the return pipes. All I have are these photos of when the pool was under construction.

As you can see, this pool was put in a tiny backyard (before the house behind was ever built).

I’m absolutely fearing the worst, as there is no space around the pool to excavate, where the pipes go to the pad (is under a massive concrete waterfall) and I have no idea if the leak could be under there or further down at the very end of the pool….

All I know is I’m loosing 1/2” in 4 hours running the pool and 1/8” loss overnight. I’ve inspected the inside of the pool for cracks, the light box, the skimmer….I’ve done a dye test and don’t see any leaks near the returns. However, my farthest 2 returns don’t have any water coming out of them…. I rarely run the waterfall, so I’m fairly certain the leak isn’t there, but I can’t just turn off the return lines and run the return water only through the waterfall all day, because the pressure of the waterfall is so high when the returns are fully closed, that water goes everywhere and for 4-8 hours to test, I’m going to have water loss there also, so I really can’t isolate how much water loss would truly be happening……

Side note: a year ago, the filter I had installed (only a year earlier) started spiking 10 psi (even after completely cleaning). The company who installed new equipment came back out 5 times (blew out the line 2 times) and could never understand why the starting PSI suddenly increased. I lived with it, since I still had water flowing out (greatly reduced), but I was still able to maintain a clean pool. Never had a leak. What I find strange is now that I’ve started loosing water, wouldn’t you think that the PSI would drop down, since it’s been running high? But it hasn’t….. clearly I’m at a loss, and will need to bring in a professional, but after my last ordeal with the previous company, I want to have some idea what I’m in for…..

That is probably flex PVC pipe.

You will need to pressure test.

If you identify a line that is leaking, you can use air and water to try to create bubbles that you can listen for to locate the leak.

You can use geophones to listen for a leak.

Check out the deal on Geophone at Anderson Manufacturing Company, Inc. 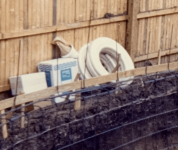 Everything Else Jun 6, 2022
curtisimo81
C
J
Advice on water Leak

Everything Else Jun 4, 2022
Jimt245
J
B
Output jet from filter has bubbles when vacuum attached

A
Leak somewhere in the plumbing?