Is it normal to find in your contract that the PB has zero liability on a new plaster job at all? We’ve had water for 3 weeks and since day 2 our deep end looks “dirty” but it won’t brush off. Our only instruction from the project manager was “brush twice a day” and “hire my maintenance company to maintain your pool.” We’ve been asking about the dark spots and he told us “it will lift.” After reading around in here, I’m confident that it won’t and then read this on our contract.
Also, they were working on a steel structure after the pool was filled and grinding the welds over the pool. Despite my brushing, I’ve found millions of micro rust spots on my spa coping that sits equal with the water line, which obviously indicates I had metal all in my water. Can this be removed, because I’m sure the PB will claim my fault on that as well? 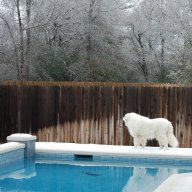 You could research pool builds with similar plaster problems. I've read quite a few. I don't have the answers for you but I hope by replying there'll be interest in your question and someone more experienced can answer. You could also jot down what type of plaster you have.

Yep, he pretty much covered his butt. The "undulations" are fair. Plaster is hand troweled and the undulations are a result. It's not going to be perfectly flat and smooth. That is expected and reasonable. But there should be no divots or ridges or trowel marks or footprints either. I'm a little less clear on mottling than I used to be. I assumed it is also to be expected. But I recently read it's a defect caused by the finishing process. Both my finishes mottled. I don't mind that look at all, so for me that would be a non-issue. The part about the cracks worries me the most. I don't think that's OK. That definitely sounds like an installation problem, something to do with the mix or the troweling technique/timing or both.

The "Reroutes" section is even more troubling, even if that wasn't an issue for you. The whole contract is basically saying whatever quality level you end up with you're stuck with, whether he caused any problems or not, and if he wrecks anything during the build process he's not on the hook to make it right. Giant red flags in my opinion, that speak to the guy's ethics. But you signed it. So not sure what else there is to say about any of that.

On the other hand, I don't see anything in the pages you posted that would protect him from damaging the finish due to his negligence, such as bombarding the finish with metal shavings caused by work he performed. Can you prove that's what happened? I would say he's liable to make that right, whatever it took.

@onBalance, is surface cracking in new plaster "normal" as this PB's contract puts it? Is it harmless? Undulations I get. But is mottling unavoidable, or a symptom of a defect caused by improper installation technique? Should a PB be exempt from any and all discoloration and staining? Not forever, of course, but for how long? Is it reasonable for a consumer to expect new plaster to be stain-free, crack-free and of consistent color?
Last edited: Oct 23, 2020
O

Whoever was performing the welding is responsible for the iron stains. They can be removed by sanding with sandpaper. I am sure that the PB will agree to remedy.

Plaster can have minor "craze cracking" and is normal. But severe shrinkage cracking is not normal or acceptable. It would have to be evaluated.

Some minor mottling is normal. But severe mottling and dark streaking and spots are not. Builder will try to put off responsibility. If mottling is determined to be severe and abnormal by an independent and professional consultant, a judge is likely to make the builder rectify the discoloration problem regardless of what the warranty states.

It would be wise to document (in some way) that discoloration and staining problems appeared within two days. If the PB says to wait to see if discoloration disappears, then get him to acknowledge (in writing) that there is discoloration and that it occurred immediately after plastering. Then you have a better chance of getting a resolution down the line, and from a judge if the builder resists.
Reactions: Dirk

Thanks @onBalance. That answers some of my questions, too! Good call on the timeline documentation.

DJ, notice in the contract, paragraph H, 2nd sentence: the PB is already setting up his escape route with the language about local water conditions, water chemistry, brushing, etc. All things he can claim caused the problem, to alleviate his responsibility and liability. In essence he's setting the stage to be able to claim it was your fault. Or the city water's fault. Or the pool boy's fault. Anybody but him. By documenting that the staining or discoloration occurred within days, he can't claim it was caused by any of those things, because all those take weeks or months or years to occur.
You must log in or register to reply here.
Share:
Facebook Reddit Pinterest Tumblr WhatsApp Email Link

A
Finally signing our contract - need help with selections

Any Oklahomans on here? Need a suggestion for a reputable replaster, retile, and recoping contractor in the Tulsa area. (Pier pics inside!)