IC60 Pentair SWG (Turned off and on by itself, basically rebooted) 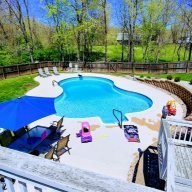 SPenfold said:
If you know what time this happened you could go back at a 12hr interval to verify.
Click to expand...

I cannot remember the exact time but I know it was late, like around 9 or 10pm. I will keep an eye out to see if I can witness it again.
C

bdavis466 said:
Jim, it was the IC60s hooked to the IntelliPH's that were having the issues.

There was no fix, the cells were replaced
Click to expand...

I don't have a intelliPH, just the IC60, and mine was in a continuous boot cycle, salt leds would flash like on start up for a couple minutes than cell lights would be steady green for a minute or so, than all lights would go out for one second, than salt leds would flash like on startup again, over and over and over this cycle would not stop.
I checked the weakest link in system, which is the connection where the salt cell cable connects to easy touch panel, unplugged this and sprayed both ends with electrical contact cleaner, left this unplugged for an hour, than replugged.
No more cycling, all good.
I always have a can of contact cleaner around. Its like magic dust for all things electrical.

Here's a probable unrelated piece of Pentair trivia. I have a Pentair IntelliConnect box that provides LAN and Internet access to controlling the Pentair Intelliflo pump, a water feature pump, and other things not currently connected (like the Pentair SWCG, for example). I noticed one day that at 7pm, the Intelliflo pump did essentially what you describe your SWCG doing. It shut off and then turned back on again, priming and then settling back to the programmed speed--just like rebooting a PC. I contacted my always helpful guy at Pentair and shortly heard back that at 7pm and 11am Central Time, the IntelliConnect does a time sync with the Pentair server, after which the whole system restarts. The Intelliflo pump (and Pentair IntelliChlor, if I get one) both connect to the IntelliConnect via RS-485, so I suspect both would reboot with the time sync, as might any devices connected to the IntelliConnect via its two relay connections, as well. I do have a Whisperflo running on a relay, but it's not been on at the time sync, so I can't say for sure. Once I knew what was going on, it was no worry.

I have no experience with other Pentair automation products, but it seems logical that the same server time sync might be a standard with all Pentair online products, possibly using different times for different products. Just speculating. I'm sure Pentair tech support could confirm.
You must log in or register to reply here.
Share:
Facebook Reddit Pinterest Tumblr WhatsApp Email Link

M
Pentair ic60 not keeping up?