How does the Maytronics M400/M4 handle leaves?

Trying to decide between an S300i/Active 30i and the Dolphin M4/M400. I have a lot of leaves as well as silt that gets in my pool. I have a fiberglass pool with seats, shelf, & steps so can be challenging for robots. I have owned an Aquabot Turbo T (it cleaned the best but lasted 4 years & I have no local Aquabot dealers/service so makes that brand difficult) and a Watertech Blue Diamond (only lasted 2 seasons & didnt clean as well as the Turbo T).

I like the 3 yr warranty on the M400 along with the 3 rd scrubbing brush. However, I am concerned that the dual cartridges may fill quickly and be a bit of a nuisance. Any experience with the M400 or M500 and leaf capacity? Dealers locally all recommend the M400 over the S series, but I think this is most likely due to the fact the S series has not been around as long.

I really like the large top basket design of the S/Active series but not sure of their reliability since they are much newer design.

I would appreciate opinions & experience on this

Not to many have robots yet, here is a bump and maybe some will see it

I would never buy a robot and expect it to pick up a lot of leaves. They simply don't have the capacity. Leaves have to be removed with a leaf net. 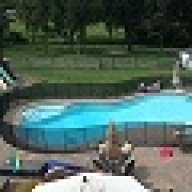 I have a Dolphin Explorer. It uses the bag, not the cartridges. Sucker holds A LOT. I will give you one of my most extreme examples. During SuperStorm Sandy I had an entire tree fall on the pool. It was already closed for the season. Lines were blown out, cover was on, etc. The tree destroyed the cover. I had to order a new one which was going to take weeks to build to my specs. For those that remember, Sandy happened the day or 2 before Halloween. I was not about to un-winterized the pool.

After standing on what was left of the cover, chainsawing up the tree and pulling off what I could, the pool was littered with twigs, saw dust, leaves and branches. You couldn't even see the floor of the shallow end. I got the largest of the stuff out I could by hand. Pulled the cover completely off and tossed the Dolphin in the pool. I did have to empty it frequently. But probably after half a dozen cycles it cleaned up EVERYTHING. Leaves and twigs alike.

To further the story, even after it was clean I continued to run the Dolphin daily in order to circulate the pool being that the pump/filter was shut down for the season. I was able to keep the water in perfect balance and algae free with this little machine. This was during the entire time that leaves were still falling from the trees. New cover arrived first week in December and I was finally able to close it up for good. That year was probably one of the cleanest the pool ever was for a closing. When they advertise that running a robot is like having a second DE filter on your pool, that is not an exaggeration.

So yeah - It's up to the task of picking up leaves. (The bag version that is. I can't speak of the cartridge variation)

duraleigh said:
I would never buy a robot and expect it to pick up a lot of leaves. They simply don't have the capacity. Leaves have to be removed with a leaf net.
Click to expand...

For leaves at the surface a robot is useless, but for leaves that have settled on the bottom a robot like the s-series with the large basket is unbeatable.
You must log in or register to reply here.
Thread Status
Hello , There was no answer in this thread for more than 60 days.
It can take a long time to get an up-to-date response or contact with relevant users.