I've been trying to find this pesky leak for a few days now. On Saturday, I noticed the water level seemed to be dropping quickly. Sure enough, we were losing about 1.5" inches a day. It seems as though we are losing the same amount of water regardless of whether the pump is running or not. However, I haven't been able to confirm as I have not tested both for 24 hours each. I tested both for 12 hours each and both showed a loss of 3/4" over 12 hours. I have not noticed any air getting into the filter.

A couple of things. We only have 1 skimmer, 1 main drain, and 1 return line for the entire pool. Our pool is 43 years old and has black poly pipe in most places (except near the equipment pad). I've closed the multiport valve on my filter to isolate the suction side and pressure side. I've done dye test on the skimmer gasket and return line gasket with no results of the dye being pulled.

The water has dropped below the skimmer and water is still holding inside of the skimmer basket with the level still dropping. So that rules out the skimmer. I placed a plug in the return line and the water still dropped. So I don't believe it is the return line. I will say though, it's entirely possible that I did not plug it tight enough or correctly (I don't close my pool). I used a rubber plug and got it as tight as I could, but I still wouldn't necessarily rule it out. Although, I think it is unlikely.

So that leaves a tear in the liner somewhere or the main drain. The liner is only a year old, but the vermiculite bottom was never repaired correctly by our contractor, so it has some sharp spots and loose vermiculite on the bottom. I wouldn't rule out a tear even though the liner is only a year old. Last year, we did have a leak in the return line that caused us to lose about 1.5" a day. We would lose only about .5" when the pump was off, but 1.5" when it on. We also had a very small suction leak in the main drain near the equipment pad. That caused some air to get into the filter, but no noticeable water loss. That was all fixed last year. This time, I began to gently dig in the same area. I got about 18" below the surface and 6" lower than the previous leak when I hit some standing water.

I'm assuming this is from the leak, but I'm not sure how close I am to the source of it. I used a pump to get some of the water out. But it comes back really quickly. I tried digging a bit more, but it's in a difficult to reach spot and there is pea gravel everywhere. When they built the pool, they must have used pea gravel to backfill. Now when I'm trying to dig, pea gravel just caves in. I'm going to try and shore it up, but it has been difficult to make much progress.

Could the source of the leak be near in one of these pipes (presumably the main drain pipe)? Or is there no way to really tell? When we had the leak in the return line last year, the water level never rose past where the leak was. So I was hoping it could be the same in this case.

Lastly, it could be possible that this is just ground water, but I doubt it. It's not down hill from anywhere, but given that they backfilled with pea gravel, that could create a pretty large void for groundwater to sit. I read online one way to test if it is a pool leak or groundwater is to test the CYA. The CYA is 0, but 30 in the pool. It's been pretty dry though, so I still think groundwater is unlikely.

Could the source of the plumbing leak be near the water level in this hole? If it's a tear in the liner, what should I look for? Will it be the size of a quarter or a pinhole? We're losing roughly 1.5" which I believe would be about 400 gallons a day.

Sorry for the long post, but I always appreciate the help given here!

So if the waterline is still dropping, there are a few things to consider such as:
- The main drain; potential leak in/around the drain or hydrostatic valve if installed.
- Pool light if installed; very common in the rear of the niche.
- The liner itself could be compromised somewhere, even new liners. You noted the potentially sharp areas underneath.
- That wet area where you dug; not sure about that being the active leak, especially if those lines are above the current waterline; but continue to inspect to be sure.

I would definitely take advantage of the good water temps now to rule-out anything below the waterline. You probably have a couple months left before transitioning to winter, so now's the time. But if the water level is still dropping, that should help narrow-down your search a bit as well.

Becasue you are seeing water in that area I suspect a tear somewhere. Hard part of finding it
E

The hydrostatic valve is plugged, a dye test helped confirm it was leaking their either. No pool light or steps either.

I've been looking for a tear like crazy, but still can't find anything. I do have a leak detection company coming out, but they're booked up for the next couple of weeks. Other companies won't return my calls or are booked up until October.

The one spot that seemed sort of conspicuous was the main drain gasket. It seemed as though dye could have been slightly pulling there, but it was really hard to tell. Seems odd though that if it were leaking there, that I would see standing water almost near the equipment pad. I'm also not seeing any bubbling in the liner or anything like that. If that is the source of the leak, the standing water is pretty far away. Not sure how likely that is, but perhaps possible given that it was backfilled with pea gravel.
1

Dig another hole close to the pool but opposite side where you dug the first. Bet ya you will see water once you reach the same depth, but i hope not . Spend some more time on that main drain to confirm a yes or no.

Hate to say it but since our seeing water in that one area wonder how far it would go if you just let it keep dropping?
bad news is if it's the main drain your pool might float out!
E

I have a paver patio on the other side of the pool, so can't dig there.

However, I think I found the leak! Unfortunately, it's in the main drain gasket . Inside the main drain pot where the main drain pipe connects to the "pot" (or whatever you call it), up and to the left of that, the dye is getting pulled very clearly. So that is definitely a leak. I'm surprised how far away I can see the standing water though.

Here is a very poor attempt at showing where the leak is. 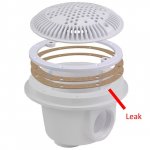 What are my options? I figured I could try the pool putty as a temporary fix. Other than that, I think they would have to drain the pool and replace it. I'm very hesitant on doing that. We had the liner installed last year and the contractor didn't do a good job on any part of the install. The vermiculite bottom was never repaired correctly and I fear that the bottom won't hold up with a drain and refill.

When our contractor installed the liner last year, he made a comment that the main drain had basically popped up. He used quikrete around it to get it back in place. However, the concrete was never really smoothed out correctly so it's a bit rugged. That's probably why the gasket couldn't get a good seal as it's not flat. It was an awful experience dealing with this contractor to say the least. We have a couple new companies that will install the liner and repair the vermiculite properly. They both said they could do it for a fair price and to give them a call when ready. I'd like to make it a bit more than one year though.

Any advice would be greatly appreciated!

I would be worried about it floating up since your seeing water at close to deck level..
Maybe somebody will have a idea, pool putty might work?
E

It's possible the liner could float a bit, but I fortunately don't have to worry about the lift like a fiberglass or gunite. I haven't seen the liner lift yet.

I'm not sure if it is as simple as replacing the gasket in this case. I wouldn't think so since I think the substrate being rugged is contributing to the problem. A local pool company didn't seem to think replacing the gasket would fix anything. They said maybe doubling up on the gaskets? But they didn't think there would be anyway to do that with the pool filled. They recommended the putty for short term fix.

I did go up to a local dive shop. The owner there said he is familiar with main drains and has done repairs on them before. He said it was easy and offered his services this weekend to help. I haven't taken him up on the offer yet. He said he can dive down and replace the gasket easy. Not sure that will fix the leak there though. And I'm not entirely sure I trust someone who isn't a pool service/repairer even though he claims it's easy and he's done it plenty before.

Sounds like you have concerns about the long term fix which makes sense..
For short term could buy a 2nd gasket and give the diver guy a few bucks for oxygen to replace it or have a closer look. If still concerned drain and fix next spring.

I see your in Indy, last time I was up there for a BOA band trip couple years back it was freezing cold, do you do a partial drain in the winter?
E

Thanks for the help! Yes, I'll definitely plan on getting this fixed permanently with the next liner install. If I could hold off, that's the plan. I'd say my biggest concern is that if the leak happens again in the winter and the pool drains. I'll probably plan to keep a good eye on it and take the cover off a bit every week and keep a watchful eye on it.

I think my local pool store was referring to adding a second gasket below the liner. But they didn't think it would be possible without draining.

And yes, it does get pretty cold here in Indy. I pay a company to close our pool and they have us drain about 18" before closing.
E

The source of the leak appears to be a screw that is not catching. It's just spinning in there. I took it out, wrapped it up in Teflon tape and put it back. It's still spinning, but it stopped the leak at least. Not sure how long that will hold though. What easy fix can I do? Should I try something like Loclite?

what does it screw into? Could you use a bigger ( in thickness ) or longer screw?
E

It's the screws shown here in the picture. I thought about trying a slightly larger screw but was a bit concerned about possibly cracking something.