Edit: repair and initial threads merged, scroll down for the repair

pool is thawed and to my dismay both of my PAL Lighting LED lights have had the front of the pool niches break off flush with the pool. The niches seem to still be sealed around the fiberglass with silicone and don’t appear to be leaking.
The lights tread into the niche so i could still technically screw in both lights. The problem is that there is now nothing holding the lights back from being pushed out the back of the fiberglass. To screw in the lights I need to apply a good amount of pressure, which I think may break the silicone holding the lights there.

Every winter I winterize the same way by letting the lights hang. This year they both broke. Clearly the water froze and then moved vertically thus breaking anything in the way.


Any techniques to fix this without digging outside the pool? 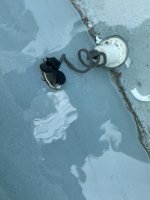 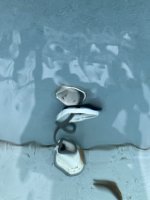 Can you identify the specific model light you have?

My lights are about 3 years old - they do not seem to be available anymore. I was able to find this parts diagram. I drew the arrow of the part that broke. The lip on the front of the niche (not sure if that is the right term?). As you can see that part has threads on the outside to allow the big wide nut (item 6 on the diagram) to come in and tighten from behind the fibreglass. There are threads inside of the niche that the light itself screws into. Hope this helps. 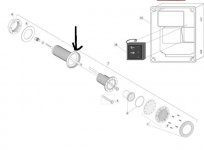 Also, this what the light itself looks like if that matters.

I don’t see how you are going to get a long term fix without digging into the back of your pool.

Ugh, exactly what I didn't want to hear... The worst part is digging that up, replacing everything and refinishing my pool deck, only to have it happen again next year. I'm not sure what I would ever do differently to winterize in the future that would avoid this happening again...

I wonder if plastic welding could form a strong enough bond...
T

Thinking of trying JB Weld PlasticWeld to try to get the front lip re-attached to the housing... With proper prep, I think it could work. I just need to find out what type of plastic the housing is made of to make sure it's compatible.

The caution is if you JB Weld the lip to your fiberglass pool you will make it that much more difficult to ever properly replace that pipe. It is unlikely you will be able to glue it to the edge of the pipe and not the fiberglass pool.

Also you said you have silicone caulk around the pipe. JB Weld will not stick to the silicone and if the silicone blocks getting a good fit it may not hold.

That is all why I didn't suggest that fix.

Would you drain the pool down below the light or try and fix it underwater?
Last edited: Apr 18, 2021
T

I can drain the pool below the side bench where the lights are so that I can work in the dry without being upside down. I will investigate when the weather is warmer but i think the break on the pipe protrudes a bit away from the fiberglass wall so I may be able to have a chance at getting a good bond with the pipe if I can make the parts fit.
T

Over the winter, the wet-niches in my fibeglass pool broke - the front part (The lip that extrudes into the pool) on both of my lights broke off due to what I suspect is vertical movement of ice during a freeze/thaw cycle. The lights are always left unscrewed and dangling into the pool for winter. One of the lips broke off intact (in one piece) and the other broke off of the pipe and the lip broke off into 4 pieces. 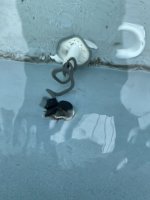 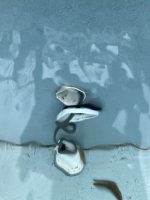 I initially thought it was pretty hopeless to salvage these without digging out behind the pool (and tearing up 2-year old very expensive pavers and landscaping!).

Instead, I did some research and settled on trying to put Humpty Dumpty back together again using plasticweld epoxy and a lot of patience.

Ended up using JBWeld PlasticWeld (4400 PSI strength). If it bonds properly, that stuff is as hard if not harder than the plastic. 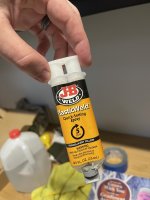 The tedious work was putting the lip back together for that one that broke in several pieces. As there are threads on the outside of the rim that the light needs to screw into, they need to line up perfectly and can't be full of epoxy. The power wire for the light also needed to be inside of the rim so the final piece had to be glued by the pool. 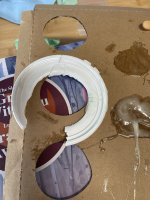 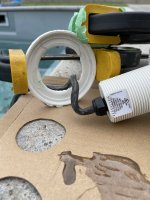 Next came welding the rims back to the pipes in the wall. Idea was to really get a good bond plastic-to-plastic and not get much overflow onto the fiberglass, etc. I think it turned out great. Used my pool net/pole to prop against other side of pool to keep pressure on it while it cured. One of the rims (one that broke off in many pieces) was still missing some of the plastic shards - used a lot of PlasticWeld to fill the voids and came back for a second application to build it up for strength and water-sealing. 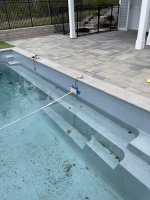 (don't mind the dirty pool, has since been cleaned out) 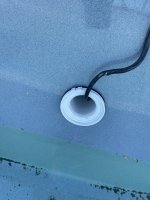 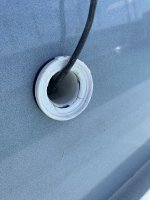 And with lights screwed in:

Now the challenge is trying to figure out how to stop this from happening again... Not sure what I can do...

Just thought I would post my DIY repair to fix this issue in case something similar happens to someone else :

Over the winter, the wet-niches in my fibeglass pool broke - the front part (The lip that extrudes into the pool) on both of my lights broke off due to what I suspect is vertical movement of ice during a freeze/thaw cycle. The lights are always left unscrewed and dangling into the pool for...

Everything Else Jul 9, 2021
cgcrandall
C