First closing/opening - a little confused about the chemistry

Pool was built last year so first closing/opening was included. In late October, the pool builder closed it for us. To my horror, they dumped in a few products I wouldn't have used myself.
First empty bottle was Pool Magic + Phosfree the next couple were from a "BASOC Winterizing kit" - quart of "Metal Out", 16oz of "Copper Algaecide", and 4 lbs of Dy-Chlor II (56%) shock.
It looks like the copper algaecide was ~23% "copper triethanolamine complex" and the metal out was "1-Hydroxyethylidene-1,1-diphosphonic acid" or CAS 2809-21-4

I called before they opened the pool last week to ask that they not dump any algaecide into my water. They did add 5lbs of shock though.

When I tested the water, I got:
FC 28.0
CC 1.0
TA 70
CH 100
CYA 46
Salt 4000 (pretty sure they dumped a bag of salt in too)
Temp 45* (it was pretty miserable sticking my arm in 1' to get water sample)
PH looked off the charts but i didn't log it because I'm fairly certain I've read here that the tests become unreliable once FC is elevated and

The following day I added water and turned the skimmers back on. When I tested at the end of the day FC had dropped to 19, CC dropped to 0.5 and the water warmed up to the mid to low 50s or so. We have most of the leaves and crud that fell off the cover out now - even the dead mouse. The next day FC was still at 18 and it looks pretty good but I've noticed that the spillover spa seems to be making bubbles that I don't remember last year. It goes away fast, but I don't recall seeing where the water landed in the pool as much as I am noticing now.

Do you think any of these potions are responsible for some of the bubbles I'm seeing? Is there anything I can do about it other than replace some water over time? Reading some of the materials on Pool Magic, looks like they shouldn't have dumped it in when they dumped the 4 lbs of shock in. I also can't help but be irritated that they dumped a metal algaecide in along with a product called "metal out". Too late now I guess. I still have a while before it is swim season, but it will be nice to have the spa back.

- pH tests are not reliable with FC over 10. So ignore your pH tests until your FC drops
- We round up on CYA tests. If the dot disappears between the 50 and 40 line you call it 50. You can't call it 46 as the scale is logarithmic, not linear. Also CYA test water should be allowed to warm up to room temperature before you mix the reagent in.

At this point relax and let your filter and CL do the work and your FC drop and your water warm up. Thinsg should fall into place.
R

Now that some time has passed, the water looks great. Thanks for the advice to sit tight.

Town water tends to have a little copper in it (0.13). I'm afraid that one bottle of copper algecide was enough to get the level over a tipping point that is making me crazy. Is there anything I can do short of draining the whole pool and finding a fill source with lower copper?

@JoyfulNoise any alternative to draining the pool and trucking in copper free water?

@RickinMA any signs of copper staining in your pool?

23% copper triethanolamine complex yields about 7% copper metal ion equivalent. 16oz in 23,000 gallons will yield a concentration of approximately 0.38ppm Cu. That explains the green hair. Copper is difficult to predict scaling on as its solubility is highly variable at the pH levels found in pools and it’s affected by the presence of chloride ions and chlorine as an oxidizer. Scaling of copper can occur with as little as 0.2ppm copper ion concentration. If your fill water is adding copper as well, then you need to be careful. You might want to use a sequestering agent to avoid staining.

None of the other stuff they added really matters, it’s all chemicals that will degrade over time and eventually go away. The Metal-Out is just HEDP which is a very common sequestering agent used in pools.

Unfortunately there’s no easy way to get rid of the copper short of draining and refilling. Unlike iron which often gets trapped in the filter when it precipitates out of solution, copper is more likely to cause surface stains. Since your fill water is adding copper, draining is not a perfect solution. If you do get stains on your liner, they will tend to look brownish colored but vitamin C won’t affect them (sometimes it makes them darker). If that happens, Jack’s Magic has a copper stain removal regimen that works, but you have to dump the water to be rid of the copper entirely.

Sorry they dumped in that stuff, all you can do now is take a wait & see approach.
R

Thank you for this info. I had just noticed the liner looked like I needed to do some scrubbing but i’ll take a closer look to see if it is copper staining. I have a grey borderless liner so copper scaling isn’t good. Neither is green hair.
Who would have thought one bottle would do this kind of damage...
Thanks again

If your backwash frequency and volume is high enough, then you’ll slowly reduce the Cu concentration over time. If you fill from a garden hose, you could also look into a hose end filter for metal removal. I don’t know of any off-hand that are good, but it could help even if it only partially reduces the copper load. 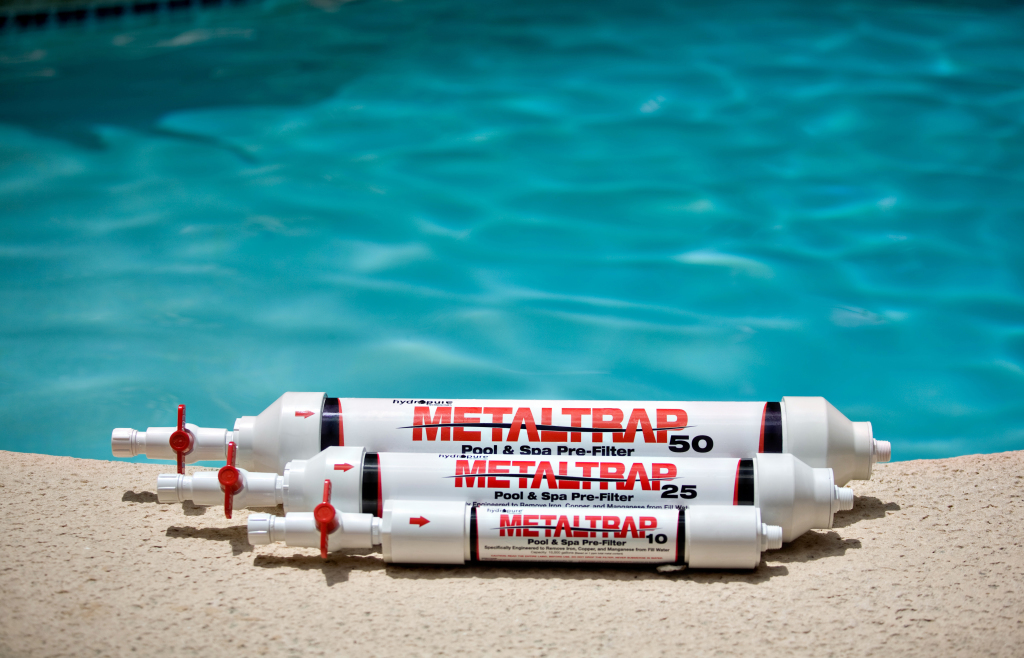 Really appreciate the suggestion. If I understand this correctly, if I was already at ~0.13ppm based on fill water and that bottle increased the copper level .38ppm, I'm now north of .5 and liner staining aside, I need to significantly drop the copper level in order for my little one to stop coming out green.
I think I have to replace at least half the water with trucked in copper free water and I really should do more than half since I think the trucks hold 9k gallons and one truckload wouldn't be enough to get me below levels that would still be problematic.
I'm probably going to take a sample to the builder's shop to have them test for cooper this weekend.
I'm trying not to overreact, but I'm really unhappy about this. It must be an issue for everyone in town who didn't fill with trucked in water.
Thanks again for your assistance, I'll update this thread when I have more info.

Copper testing is difficult to do. Unless the builder knows what they’re doing and has the proper copper test kit (they cost a lot of money), the results they give you may not be meaningful. And you have to realize that the industry as a whole doesn't really think copper-based algaecides are a bad thing. Many in the the pool building business love selling the Frog units that add metal ions and small doses of chlorine to water so they can say that they building “low chlorine” pools. If you walk in there all ticked-off, the builder likely isn’t going to get why you’re so concerned. Then they’ll try to sell you some magic potion that they swear removes copper from the water.....

I was under the impression that there are hair products out there on the market that are supposed to help with green hair. Maybe try those and have your daughter wear a swimmer’s cap when in the pool. Trucked water is expensive and sometimes the empty truck just pulls up to the fire hydrant at the end of your block, fills up and then transfers that to your pool. So you’d have to find a water supplier that will actually deliver water that is metal-free. I think @Leebo in Ohio said once that a truck full of water in his area is almost $1,000 ?

Find your way to better health.

Got some numbers mixed @JoyfulNoise

I was thinking of trying a sequestrant for the time being to reduce the green hair but wanted to see if it would likely cloud the water or impact water quality. And if so, for how long? (Hosting a few things over the next couple weeks and while I don’t want any green hair, I’d hate to have a gross cloudy pool too)
I’ve read a few threads about them and I’m willing to try it as a bandaid but want to understand what I’m getting into before dumping anything into the water.
Thanks
You must log in or register to reply here.
Thread Status
Hello , There was no answer in this thread for more than 60 days.
It can take a long time to get an up-to-date response or contact with relevant users.

Pool company added algaecide at closing but I don't know what chemical it was.

Swimming Pool Start-up and Closing Monday at 5:43 PM
bjbarlowe
B

Do you ever peek?

Swimming Pool Start-up and Closing Tuesday at 12:53 AM
BassPlayingDude

opening tomorrow and I think we have a leak. UPDATE: it's open. Do I SLAM this?