Faulty GFCI Breaker and problem pool store...could use some advice.

Hi guys. My pool pump keeps tripping the breaker so I may have a bad breaker.
In the meantime, I have to take care of my pool. I have about 3 PPM of FC in it and PH is around 7.6. TA is around 90.
I just added 64 oz of 10% bleach and swished it around with a skimmer net for a minute or so(is this long enough??) .
I also plan to scrub walls.. Anything else I can/should do ?
Last edited by a moderator: Jun 11, 2019
G

Hi guys. The breaker for my pool pump keeps tripping even when the pump is not on. The electrician(who was a contractor) said it may be a bad breaker and he can replace but has to charge me for the breaker because he said his supplier offers no warranty. (sounds like Bull to me) .
The pool store who recommended him is basically acting like its not there issue because they cant tell him how to run his business(even though they recommended him).
The electrician has offered to replace it free labor...I can buy part myself. I am kind of stuck because I need my pump. Unless this is resolved, I plan on filing all sorts of complaints. My pool has been live for about 5 weeks. Is it common for GFCI breakers to fail so early ? I think having some stuff in the skimmer basket in the pump (not too bad) **may** have caused the pump to shut off and trip the breaker but it should not kill the GFCI breaker should it ? These are about 108.00 to replace. Thoughts ? I am regretting dealing with this pool store but cant do anything about it now. I had the same pool pump/filter combo with another pool and it never tripped the breaker..ever.
Last edited by a moderator: Jun 11, 2019

Debris in your skimmer will not impact the breaker.
If the flow was completely cut off to the pump, it would eventually overheat and shut down, but even that does not usually throw a breaker.
Is the problem that the GFCI is being thrown or that the breaker is tripping? Those are 2 different things. 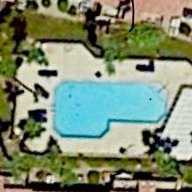 Likely it is some sort of defective breaker. Like most electrical devices, if it’s defective, it’ll fail within 3-6 months and once you’re past that point it’ll last it’s expected lifetime of 10+ years—so a failure isn’t something that’s that surprising at 5 weeks. A supplier may or may not warrant it past 30 days.

Is it just tripping the GFI, or is the breaker not staying in on position?

Is the breaker in just a traditional electrical panel, or apart of a automation panel?

I’ve replaced a few breakers myself and it’s not too difficult, but I understand even DIYers have limits on electrical fixes, esp on 220v so know your limits if cost is an issue.

Causes? Probably not due to pump overload, just a defective CB.

You can buy time and over-chlorinate and you can easily go 10 days without a pump-just no swimming.

An "electrician" should be able to do better than this. FIrst of all, check for a short circuit. Disconnect the pool power wires at the breaker and test for a short with a multimeter. If there is a short, then do the same at the pump.. If no shorts, then it probably is the breaker. He should have a GF tester to test for a ground fault.

Your situation is unclear. Is this a new pool? Is it an old pool that had the breaker replaced 5 weeks ago? Did the "electrician" replace this breaker 5 weeks ago (if so, he should warrant his work)?

Add liquid chlorine daily and manually mix it in until you get the pump running.

I'd contact the breaker mfg myself and see what they say about it. You may have to get a statement from the electrician stating the date it was installed (sold) but they may replace it.
J

Since this is a brand new pool, everything should be covered under warranty.
Last edited: Jun 11, 2019
Reactions: Chuckiechan

While it may be the GFCI beaker, it is just as likely not... Tell us more.. Did the electrician just install a new breaker or was this part of a larger project?

Besides the pump, what else is connected to this breaker?

Unless we know the "rest of the story" it is kind of hard to assign blame to anyone or anything..

While it may be the GFCI beaker, it is just as likely not... Tell us more.. Did the electrician just install a new breaker or was this part of a larger project?

Besides the pump, what else is connected to this breaker?

Unless we know the "rest of the story" it is kind of hard to assign blame to anyone or anything..

ok to be clear. this is a new pool and the electrical work is what came with the pool.
It is less than 60 days old. There is a breaker

Siemens QF250 50-Amp 2 Pole 240-Volt Ground Fault Circuit Interrupter (Discontinued by Manufacturer) - - Amazon.com
www.amazon.com
that will not stay on. Every time I turn it on, it trips. Even with the pump off. My pool store and the electrician is basically telling me I need a new breaker and I have to pay for it but they will do the labor. The only thing connected to it is the pump and a timer.
J

You have a 50 amp breaker going to the pump?

In my opinion, everything should be covered under warranty.

Siemens warrants the Circuit Breaker and Surge Protective Device for two years and will pay up to $20,000 for, at Siemens’ option, reasonable repair costs or replacement at fair market value of the residential electrical systems and hard wired appliances.

Meeting the challenges of changing energy systems requires cutting-edge products and services covering the entire energy value chain. Specifically, it calls for a comprehensive portfolio of physical and digital technologies, products and solutions that allow us to actively build our energy future.

What happens if you disconnect the load wires from the breaker? Will the breaker reset?

Ask the electrician if they will certify that the breaker has failed so that you can submit a warranty claim.

Something just does not smell right... a 50 amp breaker means you have wires as big around as your finger going to the pump...

Who built the pool? Shouldn't they be taking care of this?
G

sktn77a said:
Who built the pool? Shouldn't they be taking care of this?
Click to expand...

They should be but the pool store I went to are not standing behind the work of the contractors they recommended. They gave me a list of electricians they work with and I selected one. His claim is that the breaker has no warranty(which means he is either lying or got the part from an unauthorized retailer) and he is refusing to pay for it. The pool store is saying I need to work it out with the electrician and around and around we go. I have already purchased the part and am having an electrician friend of mine(who in retrospect I should have used but he was not available at the time) is going to install it for me.
I know this is unethical business on all fronts, and I will handle accordingly, but right now, I just need to get my pump up and running.
J

Are you sure that it's a 50 amp breaker feeding just the pool pump?

Where is the breaker?

Is there a subpanel?

Something is definitely odd about the whole situation. I suspect that it might not be a bad breaker. It might be a ground fault.

Then, contact the retailer who sold the breaker for warranty and Siemens.
Last edited: Jun 11, 2019
G

JamesW said:
Are you sure that it's a 50 amp breaker feeding just the pool pump?

Where is the breaker?

Is there a subpanel?

Something is definitely odd about the whole situation. I suspect that it might not be a bad breaker. It might be a ground fault.

There is a sub panel outside by the pump. The breaker is IN the sub panel along with the timer and there is an outlet on the side of the subpanel. . The link I provided earlier IS for the breaker in the panel. Here is the updated replacement part. Amazon description is wrong as it is 240 volt because it is 2 pole.

No pool pump requires a 240V 50amp breaker.
Are you sure it is supplying the pump and not a breaker that is back-feeding (not sure the right terminology) the sub panel power? And then you would have a separate breaker feeding the pump.

How about a picture of this subpanel? ... instead of links to various breakers

And I am not sure you ever did confirm whether the breaker power was tripping or the GFCI was tripping.
Last edited: Jun 11, 2019
J

If it's a 50 amp breaker that just goes to the pump, it's the wrong breaker.

Pictures would help us understand exactly what you have.

Breaker for feed to subpanel should be in main panel.