Welp, the inspector wound up going to my house and called the PM.
Inspector said it is acceptable to connect them together, and they will be back tomorrow to re-inspect after it's been fixed. So I at least now know that is acceptable to their inspection standards.
The PM wasn't exactly impressed that I called the inspector and said I made a big thing out of a nothing thing; and if there are any additional inspection fees then we are responsible. Mmmmkay, that's fine. Though I could argue that their sub-crew should be responsible because they were so careless but I won't do that. But, the sub denies wrongdoing and it is what it is. I explained that I didn't have ill intentions and didn't intend to call them ON the PB; that didn't cross my mind. I wanted to know what had to be done for proper inspections. I think I got the PM to understand my perspective more and all should be OK in the end.

Sometimes I listen to advice and get myself into trouble; but there again, at least I know the inspector will make sure it's done to their standards. 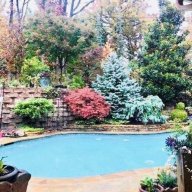 MeowMeow724 said:
The PM wasn't exactly impressed that I called the inspector and said I made a big thing out of a nothing thing;
Click to expand...

Well, as my wife likes to point out to folks..."If you aren't feeding me, paying my bills, or EDITing me, then I don't care what you think."
Reactions: MeowMeow724

JamesW said:
You should have an electrician verify that the bonding is all correct by testing it.

The bonding is a big deal. They didn't just make up the requirement out of thin air.

It needs to be done correctly. If someone cut the wires, the integrity has been compromised. It needs to checked by someone competent.

I would recommend that you have a copper grid installed beneath the pavers.

I agree with all of the above. That being said all they did for my pavers was a single loop of copper wire buried approx 2-3" under the pavers, 5' off of the edge of pool.
J

You did the right thing and best thing to your interest. PB wants to get out cheap. Town inspector is nuetral he wants it done to code. The extra fee is nothing in safety of your pool. I always tell ppl to call their inspector when in doubt he wont tell you stories 99% of the time.
Reactions: MeowMeow724
S

I wish this were the case with my build but it’s not. They may know what they are doing but when mistakes are made they either deny responsibility or feed BS. I’ve had to get angry and make threats to get things done with my PB. I think now my construction manager has improved a lot because he just wasn’t doing his job. I still have a non-functioning landscape lighting that was cut by the masons who installed it and are MIA and claiming the folks that put up the fence cut the wire. The wire was cut 3 feet from the fence.

I think its called an equal points ground bond? In California you have typically 4 points (one on each side of the pool) or copper wires coming out of the gunite, they then run a bare copper wire (I think 8 gauge) around the perimeter of your pool, you then use a bonding clamp (hdepot $5 for two I think) to connect the equal points wires to the copper loop around the pool. As long as currentl flows thru the wire you should be able to clamp/crimp/bond to it numerous times. The crew doesn't like it when you call the inspector but honestly all they have to do is give good customer service and then you don't have to call the inspector. Typically you are given 3 inspections for a single item (gunite is a single item, rebar is a single item etc...) so if the pool builder fails the grounding inspection 3 more times you should be concerned for other reasons!
Reactions: MeowMeow724
You must log in or register to reply here.
Share:
Facebook Reddit Pinterest Tumblr WhatsApp Email Link

Monday at 9:50 AM
Variant
V
D
Bond Kote vs 2 Layers of Diamond Brite