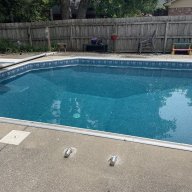 My husband and I have decided to get an automatic cover! We received an estimate from the pool company that opens and closes our pool earlier this year, but due to many things did not act on it at that time. We trust him so most likely will not seek other estimates. His quote, which expired 7/15 was just under $12,000- the cover be flush with concrete, etc. I have asked he come and talk with us so we can ask more questions. I had also asked about a manual cover instead of automatic and he said while that could be done he does not recommend as we are older and due to size of pool would be harder to manage. He did say our diving board would have to be removed. I am going to ask if there would be a way to keep it as everyone loves it. Other questions we have is do we use it as a winter cover or the winter cover we have?

Any other questions or input from all of you here would be wonderful!

Ask if he services the automatic pool cover as well as installs them?

Ask how readily available parts are for the cover?

Ask what the common failures he sees in the cover are? How often it happens? And what the repair cost is?

Ask what periodic maintenance needs to be done to the cover or its mechanism? How often? At what cost?
G

I love my automatic pool cover. Mine is a Coverstar. I think that like many things pool related, your satisfaction may be heavily dependent on the local team of folks who help you with it. The folks who installed and service my cover have been truly fantastic. I had mine installed at the initial build at it was about $15k all in, mine is under the coping, and roughly 2.5 years old.

Using it in winter in Indianapolis, you'd have to investigate and learn how to do that properly, if you're going to do it. You don't want a heavy weight of snow or ice to build up on it and damage it. That would be very expensive. From my previous readings I know some folks do use their auto cover in winter in areas north of me, but they have to take precautions to not let the cover get damaged. As far as I understand, other folks use a winter cover instead. In TN, where I am, since I heat my pool most of the year and the water never freezes (as of yet), the warmth of the water tends to melt the snow and ice on the cover and then the water gets pumped off. So far, so good. My guess is that replacing the cover if damaged would cost about $7-8K

We also had a whole house backup generator installed that will run the cover pump and pool pump if there is a power outage. We get an outage a few times per year here-- usually during a big storm, and I didn't want the cover to get damaged from water buildup or from an ice storm (every 3-5 years). I can open the cover manually with a massive wrench, but it isn't something I'd like to do in a storm. Also, you know how this works-- the one weekend you go out of town....

Before the automatic cover, I had a bubble wrap style cover with a hand operated roller. This was actually great for keeping in heat, and was less work than the auto cover (no cover pump needed). Cost way less too. I think most reasonably able bodied folks could use one of those hand crank types. It was easier to put on with 2 people than one, but one could do it.

Oh, on the issue of maintenance-- if you have one that works with rope, the ropes have to be replaced periodically, and the rope is very expensive. From what I can gather, this type of system requires extremely special rope (I think it's kevlar) and it's pricey. Then the labor to install it is costly too. People have reported buying the rope themselves and doing the labor themselves, but this isn't hardware store rope that costs 4 cents/foot. I think the rope costs around $2/ft. There are some wire based systems now-- I don't know if that's better or worse. I imagine it's a pros/cons type situation. Obviously the cover itself will fail eventually and need to be replaced. I hold back $200/mo to cover maintenance of my pool cover, generator, and heater. I'm only 2 years in on this, and I hope I'm over budgeting, but time will tell.

Thank you all for the input and questions to ask. I would think we would need to use our winter cover due to snow - I think even if they said to use the auto cover I would rather use the winter one for that reason.

Thanks again!
Last edited: Aug 8, 2021
You must log in or register to reply here.
Thread Status
Hello , There was no answer in this thread for more than 60 days.
It can take a long time to get an up-to-date response or contact with relevant users.

Keeping leaves out of the Automatic Pool Cover Vault

Everything Else Sep 6, 2021
Amajo
A
C
ManualGuard - Pool Safety Cover with Manual Reel