Aeration happens anytime bubbles or ripples form in the water.

Aeration can occur from:

When is Aeration Used?

Aeration is the best way to raise pH. That raises your pH gradually while not affecting your TA. It is free and requires no chemicals.

Aeration is used during the process to lower TA.

Aeration is also used to cool a pool. Be prepared to lower the pH with Muriatic Acid if you do a lot of cooling pool water using aeration. A water wand (fan spray) that lightly mists the surface of the water can cool without generating the hard aeration normally used to increase pH. Do it in the late evening or early morning for best impact.Z[1]

When is Aeration Not Desired?

If you want to keep your pH stable you should eliminate as much aeration as possible. Turn off any water features; point return jets down; run the spa spillover only as needed to keep the spa water chlorinated.

If you cannot turn off waterfalls or otherwise reduce the aeration, then the only way to avoid the pH rise is to significantly lower the TA level. Some have lowered it down to 50 ppm or even a bit lower. If you do that, then you need to raise the CH level and pH target to keep the water CSI in balance for plaster pools.[2]

How Long Does Aeration Take to Raise pH?

It is very difficult to predict how long aeration will take.

How effective the aeration is depend on both the number of bubbles and their size (you want lots of small bubbles). Both of those are difficult to measure or describe, so it is difficult to compare one situation to another.[3]

The rate of pH rise with aeration also depends on the TA. The higher the TA, the faster the pH will rise.

What Causes Aeration to Raise pH

Anything that increases the surface area of the air-water interface increases the rate of carbon dioxide leaving the pool water. The out gassing of CO2 causes pH to rise.

Pools are intentionally over-carbonated both to provide a pH buffer and to saturate the water with the carbonate portion of calcium carbonate to protect plaster surfaces from dissolving. In other words, there is a lot more dissolved carbon dioxide in the water than would naturally occur in equilibrium with the air (though obviously not as much as a carbonated beverage!).

Why Does Aeration Cause Only pH to Rise and Not TA?

You will find a complex answer to that in this thread on Aeration and lowering alkalinity.

How Can Aeration Be Created? 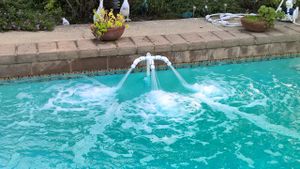 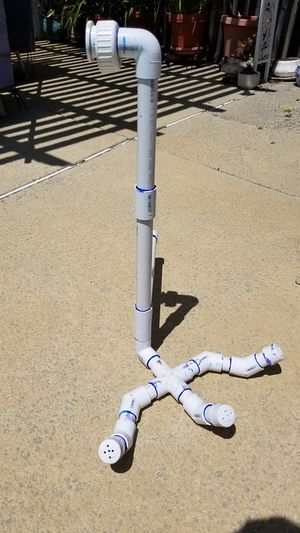 A creative member built one for about $20 from Home Depot. He hooked it up initially to his pressure side cleaner port, but have since moved it to a submersible pump because of the cost savings in electricity.[5]

Make a bubbler for the pool 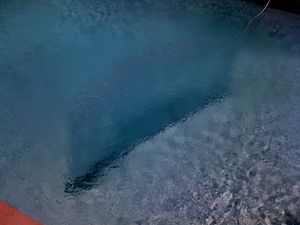 Use a length of 1/4" soaker hose zip-tied to a seven-foot piece of cement-filled PVC pipe for weight and rigidity. Connect it to a large air compressor, that can be located in the garage, via 100' of air hose. With the pressure regulator set for 30 PSI, you can get a solid curtain of tiny bubbles that is fun to swim through. It raises the pH measurably in just a few hours of use.[6] 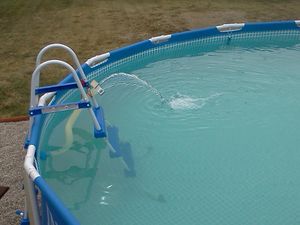 Use the hose that attaches the skimmer basket, hook it to the one water return that a small pool has, and tie it to the ladder with two metal clips to flatten the end. This raised pH from 7.2 to 7.8 in an afternoon.[7]

Build a Sprayer from PVC

Build a sprayer from PVC with an adapter for half inch pipe. Put a cap on the pipe, use a 45 degree elbow for directional purposes, drill three small holes in the cap then screw the whole thing to one of the returns. Makes a fairly nice fountain too![8]

Use a 1.5 HP well pump and a PVC manifold that has 3 threaded outlets for hooking up water hoses. Leave the hoses off and let the water shower back into the pool, while the intake side is rigged to suck water from near the bottom of the pool. Crude, but effective.[9]

For about $35, Home Depot or Amazon has a floating fountain by Poolmaster. It connects to one of your return lines. Looks good and aerates your pool while the pump is running.