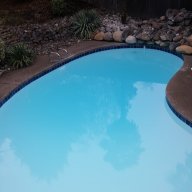 I'm conducting a water exchange on my pool.

A few questions regarding the exchange math (at the bottom):

If DeltaT is negative, then you want to extract at the lowest point and fill at the surface and at the greatest distance from the lowest point. <-Preferred as it is easier to do with a drain pump and you can fill inside one of the skimmers.

Either way it's positive, so my exchange method is fresh in the deep end, extract from the surface.

It depends on how you measure salt. The electronic methods will include CH, a drop kit will not.

0.006 is a conversion factor of TDS ppm to degrees F so it involved only TDS. This is a rough approximation but good enough for this type of calculation.

Thank you for the explaination! I appreciate you unpacking that DeltaT number for me -- the calculation makes a lot more sense now.

Side note: I use a drop test for Salt and CH separately.
You must log in or register to reply here.
Thread Status
Hello , There was no answer in this thread for more than 60 days.
It can take a long time to get an up-to-date response or contact with relevant users.

Would I benefit from Installing a reverse osmosis system on my auto fill?

Just completed a water change and decided to kick the pool store habit.