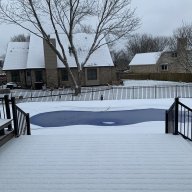 Wow, your PB's are stating you'll be getting your pools in 5-6 months, thats fantastic.
When we signed our contract in Febuary of 20, the PB said we were number 17 in line. That it would be late August, ended up getting ours in September of 2020. When the PB did the install he stated that they were into late 2022 or early 2023 for an installs.

.
You must log in or register to reply here.
Thread Status
Hello , This is an inactive thread. Any new postings here are unlikely to be seen or responded to by other members. You will get much more visibility by Starting A New Thread

M
Fiberglass Consult Soon - What Did You Wish You Asked?