You are using an out of date browser. It may not display this or other websites correctly.
You should upgrade or use an alternative browser.
F

Hello everyone! Last weekend we had a simple dry stacked retaining wall completed in preparation for a semi in-ground pool install next week. The semi in-ground pool is a Doughboy Hydrosphere 12x24' oval that will be buried 3 feet with 16 inches sticking out of the ground. We've got a decent slope in the backyard, and the retaining wall was not necessary but hoping to help. I'm a recent joiner of the TFP family and hope to glean information as we proceed in our journey. I thought sharing some pics of our progress would be helpful. I'd love to hear from any semi in-ground folks on how their process went and their decking ideas! 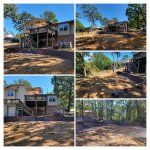 The hydrosphere is a really cool looking pool - i look forward to following your build!
Go ahead & get your test kit on order
Test Kits Compared
So u can be ready to go!

Thanks @Mdragger88 . My test kit actually came in today! Which is perfect timing because they broke ground today, too! Tomorrow they put the panels together and the concrete comes on Friday. 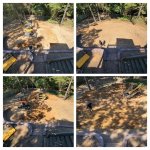 Here is a great before and after. The installer was able to dig around 41'' on the high side. So, that leaves the rest of the 52 inches to be above the ground which the concrete will hopefully meet and cover to be flush with the first step of the wall you see in both pictures. 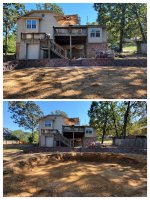 The panels went up today and the concrete footing gets poured Friday morning. After that all the backfill dirt goes in and then we can begin planning the concrete that goes around it. 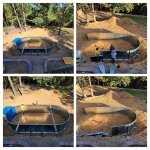 The coolest part of those is the steps! Very neat!
& Those panels look all kinds of sturdy/ tough
F

This morning the crew added crunchy dust to the base, compacted it, and then brought in the concrete for the 5-6 inch footer. They then added the foam base and corners and finally the liner. Next week they'll take the original dirt from the hole and use it as backfill. I really like the installer and he's done several of these now. But I'm just concerned that it'll literally be backfilled dirt and that's it. Seems like on this forum I've seen discussions on better backfill options that help with compaction, drainage, and etc. But perhaps since this Hydrosphere product is meant to be semi-inground it can handle the loads better than some of the ABP's that are buried? 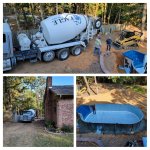 I thought doughboy generally recommends slurry mix for backfill? This recommendation is from before the hydrosphere pools were available though so who knows?
F

The current Doughboy Hydrosphere installation instructions suggest 10'' of concrete footing and only one line on backfill:
"It is recommended that the pool be backfilled with a non-compressive material. For further recommendations please contact your concrete contractor."

My installer certainly didn't do 10'' of concrete footing, but they're planning to completely bury it with backfill and then a 4'' concrete patio around it.

Feernot said:
The current Doughboy Hydrosphere installation instructions suggest 10'' of concrete footing and only one line on backfill:
"It is recommended that the pool be backfilled with a non-compressive material. For further recommendations please contact your concrete contractor."

My installer certainly didn't do 10'' of concrete footing, but they're planning to completely bury it with backfill and then a 4'' concrete patio around it.

The issue with a pure dirt backfill is that it settles. This takes time with rains & such. It’s not really possible to compact it because it’s so close to the pool.
So if that’s what you’re using you should wait until it settles at least several times to put concrete on top or else it may crack in the future.
Reactions: Feernot
F

Mdragger88 said:
The issue with a pure dirt backfill is that it settles. This takes time with rains & such. It’s not really possible to compact it because it’s so close to the pool.
So if that’s what you’re using you should wait until it settles at least several times to put concrete on top or else it may crack in the future.
Click to expand...

They're now suggesting I hook up a soaker hose around the pool to help speed up the settling? Then I think they plan on bringing in more fill dirt and possible gravel, too? I want to trust these guys as they're very familiar with full inground pools. But I'm just worried they'll do something that doesn't sit well with the semi-inground Doughboy walls.

This week the mason is going to setup the concrete blocks that will stack along the high side or downslope exposed portion. The concrete guy will fill in the rest and pour concrete around it with a cantilever coping on all the sides, including the one with the stacked concrete blocks. I need to get some better pictures from around the pool, but I've been too focused on the changes to the yard with the fence and wood deck! 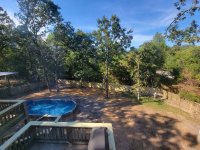 You definitely want to go through quite a few “settling” processes before putting a slab or deck. You’ll know it’s fully settled because it won’t settle anymore after getting wet. Basically- put dirt in the hole, stomp it down, get it wet, let it dry out - repeat until it doesn’t sink anymore. With mine I backfilled leaving a mound around the pool, then it rained & the mound became a trench - we did this numerous times & thought it was settled but alas it wasn’t. I also thought I had enough natural slope to drain water around & away from the pool - i was wrong. We will be pulling up deck boards soon so we can access the ground under the deck & add drainage pipe that runs all the way around the pool as well as adding more dirt & gravel & jacking up/fixing the settled portions of the deck that are closest to the pool.
I wouldn’t worry about your walls with the dirt vs slurry being as they are so thick & are made of material meant to be buried.
The trouble is that if there is a void in the dirt trench water/ice/heaving can push the sand cove out of its place under the pool compromising the support system of the wall. If u used foam cove & bottom this is much less of a concern.
Bottom line- Don’t be afraid to postpone the concrete/deck if u feel the backfill isn’t compacted enough.
Reactions: Feernot
You must log in or register to reply here.

Above Ground Pools May 27, 2021
Bperry
B
T
Is Semi-In Ground DIY Possible on This PA Hillside?