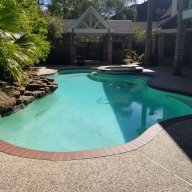 I have a Hayward Super II pump that just died while I was away for New Year's. The model is SP3015X20AZ. It was powered by a single-speed Century 2 HP motor, model SP1615Z1MBK / C48M2N111A3. I would like to replace it with a variable-speed motor.

Based on my search, I could replace just the motor with a Century V-Green 2.7 HP motor, model ECM27CU, which is currently $630 on Inyopools.com (plus new gaskets and a new impeller). Or I could replace the whole pump with one like the Pentair IntelliFlo VS 011028 (I already have a Pentair waterfall pump and a Pentair heater to go with it), which seems to be around $1200 at most places. Replacing just the motor would involve some electrical work and wrenching, but replacing the whole pump would require all that plus some pipe cutting and fitting, and possibly trouble fitting the pump into the limited space available or securing it to the concrete equipment pad.

I guess I'm worried that I'll have to replace the whole pump for some reason very soon, in which case I'll wish I made the switch to Pentair. Does anything but the motor wear out, necessitating a replacement of the whole assembly? Or can this pump go for 30 years by just replacing the motor whenever it wears out?

Flip a coin and take your chances. Either way will work.

You will probably find the 011056 VSF pump is less expensive and more available then the 011028 VS pump.

I would avoid a variable flow pump. Variable speed pump, great. Variable flow, not so much. VF pumps will keep ramping up speeds and potentially pressures in an attempt to maintain a selected flow rate.

chiefwej said:
I would avoid a variable flow pump. Variable speed pump, great. Variable flow, not so much. VF pumps will keep ramping up speeds and potentially pressures in an attempt to maintain a selected flow rate.
Click to expand...

You just use the VS features of the pump and not the flow settings and it works just like the VS 011028 pump.

They are identical pumps except for the VF programming in the drive. Don’t use it and it is identical to the 011028.
Reactions: jfreeman
You must log in or register to reply here.
Thread Status
Hello , There was no answer in this thread for more than 60 days.
It can take a long time to get an up-to-date response or contact with relevant users.

Debating between replacing motor or buying complete new VS pump