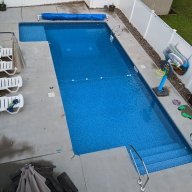 Ok first of all, I put in a pool last year and quickly became a TFP disciple. It has allowed me to keep a crystal clear pool and when I see other peoples cloudy pool because I know their pool is not properly balanced it bothers me. Im stumped on this one.

Opened my pool this year and SLAMmed it, and have had crystal clear water since like day 4. Ive been meticulously maintaining and I got a little greedy and now its going to be the hottest day of the year and my friggin pool is cloudy.

Water was crystal clear and it was going to be a hot day but we were not going to be home till late afternoon. I had been meaning to get my TA up to 70 which was my target. 2lbs of baking soda pool math said. I go into the lazy suzan and sure enough we had about two, 1lb boxes of opened baking soda (probably old). They were not quite full but mostly full so figured that would do the trick. I dumped them one at a time in the skimmer and they dissolved and good to go (it was about 1045am). Got home at about 3pm and kids swam till about 5pm. Pool was fine, crystal clear. Temp rose like 4 degrees from 11-3 it was so hot out. Left the pool cover off all night because sunday was going to be hot and we were going to be gone from early AM to late evening for Fathers day/7yr old sons bday. Checked in the AM and all looked good, no issues. Did not check the numbers. Get home at 830pm and POOL IS CLOUDY. I immediately checked FC and it was 3.5, which is low, but didnt think it would make pool cloudy. Added the 96 oz of chlorine it said to get my pool back up to 10 (which is highest recommended level) and I could not sleep all night because I was worried it wouldnt clear up. And I was right. Get up this AM and still cloudy. I checked the FC and its only 7 (which is normal but it SHOULD be at 10).

My numbers this AM are as follows

I know my calcium levels are low, they have been all year, but I have a vinyl pool so i did not think it was a huge deal to keep it this low. I did notice something when looking in my skimmer, there is something in my pool that wasnt there before I added the baking soda, it looks kind of filmy (see gif). Im wondering if its the baking soda not dissolved properly. I run my pump 24/7 and it is in proper operating levels not requiring backwash yet). Also, why did my FC not get to 10 like it was supposed to overnight? Bad chlorine (part of a 4 pack I got which seemed to be fine last time I tested)? Is something eating at it? Is that what the white film is. Kids are coming over this afternoon to swim and I want to make sure its safe but I am stumped. I am confident your smart folks can help me! The last thing is, would baking soda lose its properties if old? Im not sure how old this stuff was, guessing pretty old but it looked fine and my TA level rose appropriately. Sorry for the novella.

At that pH I doubt it has anything to do with the baking soda.

I would suggest taking your FC to 20% of CYA for today. Do a proper OCLT tonight. See if you have anything growing.

Thanks so get it up to about 14? Do you think it could be the baking soda not mixing correctly causing the cloudiness? I did read that baking soda could temporarily cause cloudiness but it took about a day to show up.

I doubt the baking soda is an issue. In the future, never add any chemicals directly to the skimmer.

14 ppm FC is 20% of your reported CYA. Just a bit of liquid chlorine. May not be needed, but sometimes can nip an issue before it gets to were you need to SLAM.

At my cya level to get to 14 is 100oz so it's a bit more than a little but somethings amiss. I do agree that more cholorine is likely the answer but the only thing I changed was adding the baking soda. Trying to keep it simple.
You must log in or register to reply here.
Share:
Facebook Reddit Pinterest Tumblr WhatsApp Email Link