:-D
Just stopping by to say how grateful I am to have found this site! After 3 in-ground pools (1 plaster, 1 gunite) I thought I had seen it all. To anyone considering a pool for the first time and everyone I meet that says how much trouble a pool is, they are wrong! My pool company had lef me to believe all sorts of things and once I decided I would take over the care of the pool, I found that THEY were the problem and had I done my homework years ago, I could have saved THOUSANDS of dollars.

After many years of paying for pool maintenance and repairs, I decided to take it on myself this summer when after 3 years and two pumps (1.5hp Emerson) I smelled a fish story. We moved to an older home 4 years ago and when we went to start the pump it would hum, but not crank. Called pool company and they said we needed a new pump, new pipes, new sand filter and more. The pool is 28,000 in ground gunite and the multiport valve was brand new sitting atop a 350 sand filter from the 1970's with perfectly new pipes and valves, skimmer covers etc. Not knowing any better, we said replace the pump and we'll see how the first season goes. The took care of weekly maintenance and every couple of weeks there would be something broken, needed replacement, more chemicals, skimmer cover cracked, leaky gasket or seal...something to keep them rolling in $.

Got the first year bill on December 15 for $9,876. Almost $1000 for "replacing the pump nd re-piping. Having owned multiple pools this seemed outrageous but we were busy traveling for work so sucked it up. We then came across the previous owners meticulous records and found they had used the BBB since 1976! Told shop we were going to try it and they scoffed at us, but told us they would still handle maintenance and major repairs. Wanted to keep them in business so still bought parts and items from them even if the price was 20% or more than we could order online. The final straw was when our college friend who was at one time a commercial pool contractor lost his job and offered to paint the pool (the previous owner's painter either had not prepped appropriately or the pool co we used was adding too many chemicals to cause it...which apparently is more likely) to pay off a loan. We ordered the paint from them and they refused to deliver it AND it cost $29 more a gallon from them than a major mail order catalog that had free delivery! Prep and paint went beautifully and 3 years out is absolutely perfect, no chalking, staining or anything. And still using the same equipment though they pushed us to go to Cartridge or DE filter and SWG.

This year pump would not start and was humming again and I looked on here and found I should test capacitor. Disconnected and took end off pump removed capacitor and took to an electrical supplier house, it WAS weak and bought a new one for $12.00. Put it in and the pump cranked up immediately. Just to test our theory, (we had decided to replace the huge fiberglass tank filter because it was shedding fibers on the exterior and the top gasket was leaking because of decomposition of the rubber) we put the old capacitor back in and put rewired the pump and sure enough, these guys said we needed another $1000 pump job. I came out of the garage with the new capacitor, told them to wait and put it in and cranked it up and to our amazement, they were speechless that a woman knew what she was doing. My husband was away for the day!

I had already gotten their price for the new sand filter (we love it, have always had them and have only had a problem the year someone convinced us to put a copper ionizer on our old pool (will skip that nightmare altogether!)) which was $447. We got the exact same one from a well known shopping website for $247...delivered free. Must say I was not a fan of the sand removal/replacement process but trial and error and a shop vac helped. As for the pipes, We have found they were replaced about 10 years ago when the previous owner added an irrigation system. The pool company told us the laterals were cracked in our old filter and low and behold when we removed the pipe and inspected, they had been replaced too. Not a crack in site, the sand was entering the pool because they cut the pipe too short and attempted to cover their tracks by adding a slip collar that wasn't sealed to the top of the center pipe when they replaced the laterals and sand. Again previous meticulous owner had the records showing the same company had done the work which i showed to the owners and they denied remembering doing that job for her. Poor woman had probably been taken to the cleaners for years.

We piped and installed new filter in April ...went to BBB and even with weeks of 90+ temps and massive amounts of rain, the pool is crystal clear and has required minimal maintenance to maintain water balance. We live in a small town in eastern NC and have only 2 pool companies to choose from. Both have been on the shady side and over charged and oversold us unneeded products over the years. Taking control of our own pool has been the best thing ever. Thanks for showing us the ropes!!! 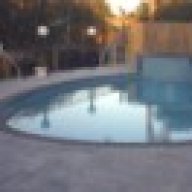 What a great story.

The satisfaction of keeping YOUR pool is ABSOLUTELY AMAZING, once you bother to learn the proper chemistry method, how the filtration operates and how to correct/avoid problems.

Welcome aboard from Virginia Beach!
S